Accessibility links
The Memorable Faces Of 'Goodbye Solo' In Ramin Bahrani's new film, Goodbye Solo, a Senegalese immigrant cabdriver tries to save an elderly passenger who he suspects is suicidal. 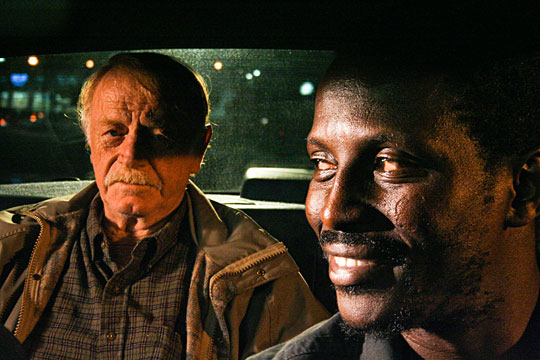 'Who Told You To Come Here?'

So much of a movie's appeal comes down to whether you enjoy staring at the actors' faces. In Ramin Bahrani's Goodbye Solo, there are two you've most likely never seen before — two tantalizing maps to pore over. The first belongs to Souleymane Sy Savane. He plays Solo, a Senegalese immigrant cabdriver in Winston-Salem, N.C. His face is wide and reddish-brown, with an indentation in his cheek the shape of a baby's foot and laughing eyes that can quickly turn quizzical.

The film opens, audaciously, with Solo in midchortle. That's because a passenger of his, an old man named William, played by Red West — the other great face — has just said he'll give him $1,000 for a trip one week hence to a mountain with a windy overlook called Blowing Rock. That's a one-way trip, and it doesn't take a weatherman to know which way that wind blows. The implication is unmistakable. When Solo realizes it's not a joke, he sets about injecting himself into William's life, to the point of moving into William's motel room. He's studying to be a flight attendant, and he attempts to engage the old man in his hopeful quest.

This is potentially a sentimental setup, and potentially creepy, too. You have a black man who could be said to represent the life force, and he's tying to revive the white person's spirit, which is so Driving Miss Daisy, so The Legend of Bagger Vance, and that "big dog big dog" thing Solo does can get on your nerves as much as it gets on William's. But Goodbye Solo never goes soft. To the end it's a tug-of-war between hope and resignation in which neither player openly acknowledges what's at stake.

Bahrani's first film, Man Push Cart, also centers on an industrious immigrant, a Pakistani ex-rock star with a hot-dog cart in Manhattan: The movie is somewhat contrived but gorgeously shot and evocative — the man's day-to-day rituals might threaten to grind him down, but to us, his outsider perspective on a world we thought we knew is endlessly fascinating. In Bahrani's grittier second film, Chop Shop, his protagonist is a pre-pubescent Latino orphan boy who lives above an auto-repair garage and earns a living doing odd jobs, some legal, some extralegal. You're forced to suspend your moral judgments — you watch his dogged survival with a mixture of pain and awe. You wonder how he can go on with so little positive reinforcement.

In Goodbye Solo, Bahrani has made a true drama: Solo engages; William parries. William yields — then his defenses fly up and he curses Solo out like the ex-biker he is. Solo keeps on: He's a hustler, in the best sense. He lives the way he plays soccer, guilelessly but inexhaustibly. He has a baby on the way, a family in Senegal, big dreams of flight. Yet it's fair to tell you that in some ways he falls short of his quest to reach William. Optimism, exhortation — they can go only so far. William has been places Solo will never understand. The actor West's eyes have bags under bags, yet they're almost lidless, huge and liquid. Those eyes let us in, while his harsh demeanor shuts us out. The director never gives up on William; his camera never stops searching that face. But he finally respects its mystery. The greatness of Goodbye Solo is in both faces. It's a film of overflowing humanism, yet it acknowledges, in grief and wonder, that some things can never be reconciled.