Accessibility links
Neko Case And Will Sheff In Concert Emerging out of the sound of spring peepers, Neko Case stepped onto the 9:30 Club stage set in something out of a nature cartoon. Behind them videos of cyclones and airplanes were projected on a screen. But the attention was clearly on Case, her stunning voice, as well as her solid backing band. Okkervil River's Will Sheff opened.

Neko Case And Will Sheff In Concert 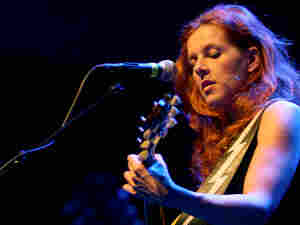 Emerging out of the sound of the spring peepers that close her new album, Middle Cyclone, Neko Case and her five-piece band opened the night's performance with "Maybe Sparrow." The stage was set in something out of a nature cartoon with trees painted on long banners and an owl overseeing it all. Behind them videos of cyclones, airplanes and anthropomorphic animals were projected on a screen. But the attention was clearly on Case, her stunning voice, as well as her solid backing band. She gave a full concert from Washington, D.C.'s 9:30 Club, which was webcast live on NPR.org. Okkervil River's Will Sheff opened, stepping in for Crooked Fingers, the Eric Bachmann outfit that double-booked that night.

For much of her career, singer Case has led two lives: one as a power-pop vocalist for the Canadian supergroup The New Pornographers, and one as a solo artist who croons heartfelt songs steeped in country and gospel. But regardless of her role, Case has always possessed one of the most memorable and seductive voices in music.

When Case last toured as a solo act, in support of 2006's Fox Confessor Brings the Flood, she claimed that she didn't like love songs, and that she was incapable of writing one. But on her sixth studio album, Middle Cyclone, Case offers up what she calls "a bunch of love songs," which are heartbreakingly beautiful — and, at times, comical. Middle Cyclone is also one of Case's most surprising albums, veering at times into more experimental territory, complete with ambient textures and sound effects.