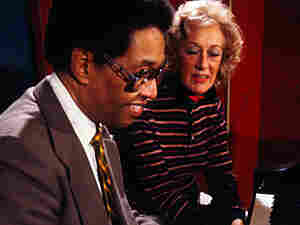 Not only was Billy Taylor the first guest on Piano Jazz, but years later, he would also host his own NPR program, called Billy Taylor's Jazz at the Kennedy Center. SCETV & Radio hide caption

Piano Jazz celebrates 30 years on the air by resurfacing the episode that began the series, featuring Dr. Billy Taylor. The program was first broadcast on April 1, 1979.

In 1978, South Carolina ETV Radio had just wrapped production on the Peabody Award-winning series American Popular Song. Co-hosted by songwriter and composer Alec Wilder and jazz pianist and songwriter Loonis McGlohon, the show featured performers such as Mabel Mercer, Bobby Short and Johnny Hartman, who would talk about and perform some of the great works from the American popular songbook. Despite the show's success, Wilder's failing health meant he couldn't carry the show past its original run of 40 episodes. However, Wilder, producer Dick Phipps and director of South Carolina ETV Radio William Hay felt that the program's simple format of intimate conversation and original musical performance was just the thing that public-radio audiences craved. NPR agreed.

Wilder recommended his friend Marian McPartland as the ideal host for a new show. She could play in any style, she knew everyone on the scene and she had previous radio experience. With Phipps and Hay as her producers, McPartland began recording episodes of a new NPR program in the fall of 1978 at the Baldwin Piano showrooms in New York City.

The first broadcast of Piano Jazz hit the airwaves on April 1, 1979. McPartland's guest was pianist, educator and jazz ambassador Dr. Billy Taylor. The show included all of the elements that would come to define Piano Jazz. There was jazz history, as Taylor talked about Art Tatum, Duke Ellington and Oscar Pettiford. And there was an element of education to the conversation: The two discussed the arts of "comping," or reharmonizing standards and improvisation.

Of course, the piano performances were the highlight of the hour. Taylor played his hit "C A G" after describing its origins, and McPartland joined him on his equally well-known "Capricious." Piano duets weren't that common in 1979 — they aren't all that common in performance now. But McPartland started a tradition that has become a foundational element of the show when she and Taylor demonstrated their stylistic mastery on "All the Things You Are."