Accessibility links
A Eulogy For The Boombox Before iPods (or even CDs) there were boomboxes. It's been 20 years since they disappeared from the streets, but the nostalgia they evoke is about more than stereo equipment. We've changed the way we listen to music — and to each other.

LL Cool J's "I Can't Live Without My Radio" is a love song to the boombox. Janette Beckman/Getty Images hide caption 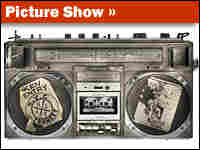 Music In This Piece

LL Cool J's "I Can't Live Without My Radio"

Before there were iPods, or even CDs, and around the time cassettes let break dancers move the party to a cardboard dance floor on the sidewalk, there were boomboxes. It's been 20 years since the devices disappeared from the streets. It's high time to press rewind on this aspect of America's musical history.

Back in the day, you could take your music with you and play it loud, even if people didn't want to hear it. 150 decibels of power-packed bass blasted out on street corners from New York City to Topeka. Starting in the mid-'70s, boomboxes were available everywhere, and they weren't too expensive. Young inner-city kids lugged them around, and kids in the suburbs kept them in their cars.

They weren't just portable tape players with the speakers built in. You could record off the radio, and most had double cassette decks, so if you were walking down the street and you heard something you liked, you could go up to the kid and ask to dub a copy.

They were called boomboxes, or ghetto blasters. But to most of the young kids in New York City, they were just a box.

"People that were big fans of music at the time were into higher-fidelity, better-quality sound — bass, midrange and treble," Freddy says. "So [the manufacturers] listened to what the consumer, what the young hip kid on the streets of New York, wanted. We wanted bass."

The Rise Of The Big Box

The boxes had to be big, to make that bass boom. The speakers in early boxes had extra-large magnets to push all that air around, and they were housed in heavy metal casing to deal with the vibrations from all the bass. Fab 5 Freddy says they got pretty big.

"I remember some boxes so big, they required 20 D-size batteries to an already heavy box," he says. "So these boxes were so heavy that some cats that would carry their boxes all the time, they would develop massive forearms and biceps."

The boxes were part of a style that included white Adidas and big gold chains. Freddy was a filmmaker and artist at the time, and he says he took his box everywhere.

"I traveled with my massive boombox," Freddy says. "That thing moved with me, you know. I remember, like, being on the plane — it couldn't go in the overhead bin, but that was my baby. It traveled first class right along with me."

But the trappings of this new culture were secondary to the music. This was the dawn of hip-hop, and it might not have happened without the boombox.

"A big part of this hip-hop culture in the beginning was putting things in your face, whether you liked it or not," Freddy says. "That was the graffiti, that's like a break dance battle right at your feet, you know what I'm saying? Or this music blasting loud, whether you wanted to hear it or not."

As the '80s wore on, cities started enforcing noise ordinances. The Walkman became popular, and it was lighter and cheaper. Gradually, people stopped listening to music together. The rap world eventually left the corner and moved online. People still pass songs around, but now it's on file-sharing sites and blogs. Headphones are universally accepted, and eye contact is frowned upon.

These days, you don't see or hear many boomboxes, except at Lyle Owerko's house. He collects them. He keeps most of them in storage, taped up in bubble wrap to, as he says, preserve the domestic bliss. His favorite is the GF9696.

"It's absolutely my most mint box," Owerko says. "It's incredibly shiny; it's 40 watts. The speaker grilles detach, which makes it look really mean."

Owerko's collection of 40 boxes includes Lasonics and Sanyos, JVCs and Crowns. He photographs them and blows the prints up to make the boxes look even bigger than they are in real life.

Though Owerko grew up far from the city, in western Ontario, even there all the cool kids carried boxes. The only difference was that they were blasting Led Zeppelin and Ozzy Osbourne.

The Impression Of What's Real

Boxes didn't stay cool forever: They started to be made from plastic and decorated in neon colors and flashing lights. They were sold to people who didn't care about sound but just wanted to look like they were down. Owerko says the transition wasn't surprising.

"Towards the end of any culture, you have the second or third generation that steps into the culture, which is so far from the origination," he says. "It's the impression of what's real, but it's not the full definition of what's real. It's just cheesy."

Today, he uses his collection as props on photo shoots, and he says the sight of them sends everyone from models to art directors down memory lane. Vintage boomboxes sell for upwards of $1,000 now, so those who had one back then can kick themselves for not holding on to it.

Fab 5 Freddy misses his box, too, but at least he can go visit it — it's on display at the Smithsonian's Museum of American History in Washington, D.C.

The nostalgia for boomboxes isn't just about a trend in stereo equipment. When the music was loud and unavoidable, we had to listen to each other. Maybe we miss boomboxes because when we're wearing headphones, we can't talk to anyone else. Which makes it hard to help each other out, and makes it hard to party.

Watch A Video About The History Of The Boombox

This piece was reported by Frannie Kelley, Roy Hurst and Caitlin Kenney.