Accessibility links
How Now, Wench? Talking Like Shakespeare Chicago Mayor Richard Daley declareth Thursday "Talk Like Shakespeare" day in honor of the 445th anniversary of William Shakespeare's birth. And folks in the Windy City are learning to speaketh the Shakespearean lingo. 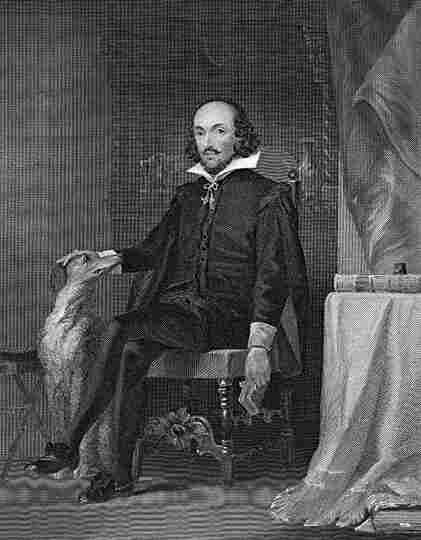 William Shakespeare died on April 23, 1616, and April 23 is the day celebrated as his birthday. Chicago has declared the day "Talk Like Shakespeare" day. Bettmann/Corbis hide caption

And folks in the Windy City, from fans at Wrigley Field to the aldermen on the City Council, are picking up the Shakespearean lingo.

"Instead of saying, 'Hey you,' [it's] 'Hark thee!' or 'Prithee,' " says Barbara Gaines, founder and artistic director of the Chicago Shakespeare Theater. "Instead of saying, 'you,' say 'thou.' The men are called 'sirrah,' and the ladies are called 'mistress.' And all of your friends are 'cousins.' Don't ask what this means, but in Shakespeare, everybody's called cousin this and cousin that, when they have no relation."

"And if you can rhyme something, that's brilliant," Gaines adds.

In Elizabethan times, Shakespeare and his fellows didn't curse like people do today, says Gaines. Insults were well-thought-out and designed to torment their targets.

Overall, if ever in doubt when trying to talk like Shakespeare, Gaines says just add e-t-h at the end of a verb.

Because some of Chicago's most dramatic theatrics take place on the political stage, NPR tried to see if some Chicago aldermen would talk like Shakespeare.

Alderman Tom Allen wouldn't even try, saying: "I think Chicagoans have their own unique dialect, and it doesn't sound very much like Shakespeare."

But that didn't stop Alderman Emma Mitts from giving it a try on one of her pet issues.

"My cousins," Mitts passionately implored, "methinks thou shouldeth support another Wal-Mart in the city of Chicago."

"I would like to have my beef-witted colleagues support the barnacle-bladder, boar-pig ordinance that I have presented today," he said.

In his 35 years on the City Council, Mell says he's seen many a Shakespearean plotline unfold.

"Et tu, Brute. I think a lot of us have been stabbed in the back, unfortunately," said Mell, who is the father-in-law of impeached former Illinois Gov. Rod Blagojevich. The two are no longer on speaking terms following a falling-out after Mell orchestrated Blagojevich's election as governor in 2002.

The Hokey Pokey (In The Style Of Shakespeare)

Then soon upon a backward journey lithe.

Anon, once more the gesture, then begin:

Commence thou then the fervid Hokey-Poke,

To spin! A wilde release from Heavens yoke.

The Hoke, the poke — banish now thy doubt

Verily, I say, 'tis what it's all about.

— By Jeff Brechlin of Potomac Falls, Va., as part of a contest in The Washington Post.

To Drink Or Not To Drink ... At Wrigley Field

At Wrigley Field, home of the storied baseball team the Chicago Cubs — and to many a Shakespearean-like tragedy, too — beer vender Vince Pavalonis tried a Shakespearean sales pitch.

"To drink or not to drink: That is the question," yelled Pavalonis, as he sold the local favorite, Ye Olde Style beer, on a recent day.

As for the fans, Corie Sparlin, 15, of Chicago, found a Shakespearean way to insult the other team, yelling, "What fools these mortals be!"

"You artless, fowling bat pig!" exclaimed Chicagoan Sean Johnson, who then added, "Methinks the beslubbering beef-witted pitcher throweth as such a boar-pig would."

Art and Claire Korman are fans of both the Cubs and Shakespeare. When they were dating many years ago, he gave her a book of Shakespeare sonnets that she still keeps at her bedside.

When an opposing player "homereth into right field," they tried to grieve as Shakespeare would have, coming up with: "Alas, poor Cubbies. I knew them. 'Twas a long one. And 'twas long gone."

But the Cubs cometh back and winneth the game. So in the words of Shakespeare: "All's well that ends well."