Accessibility links
In Praise Of Ondaatje's Gloriously Intoxicating 'Lion' Author Kamila Shamsie owns two copies of Michael Ondaatje's In the Skin of a Lion so that no matter where she is, she can always slip into the novel's vital, heart-stopping world. 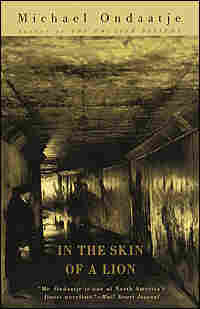 In the Skin of a Lion
By Michael Ondaatje
Paperback, 256 pages
Vintage
List price: $13.95 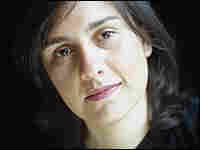 Kamila Shamsie is the author of five novels, the most recent of which is Burnt Shadows. Her first novel (unpublished) was co-written with her best friend at the age of 11 and is set in dog heaven. It's called A Dog's Life, and After. She is particularly proud, in retrospect, of the comma in the title. Courtesy of Kamila Shamsie hide caption

There are certain books that I claim to love and that I recommend to many of my friends, but it's not really love, it's just appreciation.

I know this because there are other books that I do truly deeply love. I love them so much that I can't risk giving them to friends who might not adore them as well — how could I be sure the friendship will survive such a blow? In the end, it seems safer to keep those books for myself.

And yet, it is also a quality of love to want to announce it from the rooftops. So here I am, telling anyone who will listen, of my love for Michael Ondaatje's In the Skin of a Lion.

Many people know Ondaatje as the author of The English Patient, but how many of you are aware that In the Skin of a Lion is a prequel of sorts to that novel? The characters of the young nurse, Hana, and the wounded thief, Caravaggio, both appeared first in this book.

It's a slim novel, fewer than 300 pages, yet the gorgeous writing style is so condensed that it has a degree of richness that few books can match.

It's a book about lovers, but it's also about anarchists and actresses, thieves and bridge-builders, migrants and mavericks.

And it's a book of many moods. There is real anger in it about the way the powerful take advantage of those who work the hardest; there is incredible tenderness between friends and lovers; there are flashes of unexpected humor; and there are some truly heart-stopping moments.

Binding it all together is writing filled with the most glorious, startling images. One of my favorites is the vision of a nun falling off a bridge at night like a "black garbed bird," her plummeting body illuminated by the light spraying down from a flare.

In the world of this novel, there is no small talk, no passages your eye skims over. The characters are full of passion. Unexpected events keep happening without seeming contrived. Tiny details acquire great significance.

It's as though Ondaatje is showing us the world through a magic magnifying glass, which enlarges everything that is vital and interesting, and obliterates all that is dull. When I read it, every nerve ending that has been de-sensitized by an onslaught of news and facts in the "real world" suddenly starts to feel love and anger, terror and wonder more passionately than before.

When sitting down to think about how to convey my love for this book, I tried to calculate how many times I've read it, but I can't. It long ago stopped being one of those books I need to read from beginning to end and instead is a book I keep by my bedside at all times. I have one copy in London and one copy in Karachi, so that no matter which of my homes I'm in, I can enter the intoxicating world Ondaatje creates.

So now I've done it: I've gone public with the object of my affection.

I have to admit — it makes me nervous. If you read the book, maybe you'll tell other people about it. Or maybe, like me, you'll want to keep it for yourself, until the day you can hold it in no longer and then you'll shout it out from the rooftops or over the airwaves.

You Must Read This is produced by Ellen Silva.

Excerpt: 'In the Skin of a Lion'

In the Skin of a Lion
By Michael Ondaatje
Paperback, 256 pages
Vintage
List price: $13.95

If he is awake early enough the boy sees the men walk past the farmhouse down First Lake Road. Then he stands at the bedroom window and watches: he can see two or three lanterns between the soft maple and the walnut tree. He hears their boots on gravel. Thirty loggers, wrapped up dark, carrying axes and small packages of food which hang from their belts. The boy walks downstairs and moves to a window in the kitchen where he can look down the driveway. They move from right to left. Already they seem exhausted, before the energy of the sun.

Sometimes, he knows, this collection of strangers will meet the cows being brought in from a pasture barn for milking and there will be a hushed politeness as they stand to the side of the road holding up the lanterns (one step back and they will be in a knee-high snowdrift), to let the cows lazily pass them on the narrow road. Sometimes the men put their hands on the warm flanks of these animals and receive their heat as they pass. They put their thin-gloved hands no these black and white creatures, who are barely discernible in the last of the night's darkness. They must do this gently, without any sense of attack or right. They do not own this land as the owner of the cows does.

The holsteins pass the silent gauntlet of men. The farmer who follows the cows nods. He passes this strange community most mornings during the winter months, the companionship a silent comfort to him in the dark of five A.M. — for he has been rounding up cattle for over an hour to take them to the milking barns.

The boy who witnesses this procession, and who even dreams about it, has also watched the men working a mile away in the grey trees. He has heard their barks, heard their axes banging into the cold wood as if into metal, has seen a fire beside the creek where water is molecular and grey under the thin ice.

The sweat moves between their hard bodies and the cold clothes. Some die of pneumonia or from the sulphur in their lungs from the mills they work in during other seasons. They sleep in the shacks behind the Bellrock Hotel and have little connection with the town.

Neither the boy nor his father has ever been into those dark rooms, into a warmth which is the odour of men. A raw table, four bunks, a window the size of a torso. These are built each December and dismantled the following spring. No one in the town of Bellrock really knows where the men have come from. It takes someone else, much later, to tell the boy that. The only connection the loggers have with the town is when they emerge to skate along the line of river, on homemade skates, the blades made of old knives.

For the boy the end of winter means a blue river, means the disappearance of these men.

He longs for the summer nights, for the moment when he turns out the lights, turns out even the small cream funnel in the hall near the room where his father sleeps. Then the house is in darkness except for the bright light in the kitchen. He sits down at the long table and looks into his school geography book with the maps of the world, the white sweep of currents, testing the names to himself, mouthing out the exotic. Caspian. Nepal. Durango. He closes the book and brushes it with his palms, feeling the texture of the pebbled cover and its coloured dyes which create a map of Canada.

Later, he walks through the dark living room, his hand stretched out in front of him, and returns the book to a shelf. He stands in darkness, rubbing his arms to bring energy back into his body. He is forcing himself to stay awake, take his time. It is still hot and he is naked to the waist. He walks back into the bright kitchen and moves from window to window to search out the moths pinioned against the screen, clinging to the brightness. From across the fields they will have seen this one lighted room and traveled towards it. A summer night's inquiry.

Bugs, plant hoppers, grasshoppers, rust-dark moths. Patrick gazes on these things which have navigated the warm air above the surface of the earth and attached themselves to the mesh with a muted thunk. He'd heard them as he read, his senses tuned to such noises. Years later at the Riverdale Library he will learn how the shining leaf-chafers destroy shrubbery, how the flower beetles feed on the juice of decaying wood or young corn. There will suddenly be order and shape to these nights. Having given them fictional names he will learn their formal titles as if perusing the guest list for a ball — the Spur-throated Grasshopper! The Archbishop of Canterbury!

Even the real names are beautiful. Amber-winged skimmer. Bush cricket. Throughout the summer he records their visit and sketches the repeaters. Is it the same creature? He crayons the orange wings of the geometer into his notebook, the lunar moth, the soft brown — as if rabbit fur — of the tussock moth. He will not open the screen and capture their pollened bodies. He did this once and the terrified thrash of the moth — a brown-pink creature who released coloured dust on his fingers — scared them both.

Up close they are prehistoric. The insect jaws munch. Are they eating something minute or is it subliminal — the way his father chews his tongue when in the fields. The kitchen light radiates through their porous wings; even those that are squat, like the peach-green aphid, appear to be constructed of powder.

Patrick pulls a double-ocarina from his pocket. Outside he will not waken his father, the noise will simply drift up into the arms of soft maple. Perhaps he can haunt these creatures. Perhaps they are not mute at all, it is just a lack of range in his hearing. (When he was nine his father discovered him lying on the ground, his ear against the hard shell of cow shit inside which he could hear several bugs flapping and knocking.) He knows the robust calls from the small bodies of cicadas, but he wants conversation — the language of damsel flies who need something to translate their breath the way he uses the ocarina to give himself a voice, something to leap with over the wall of this place.

Do they return nightly to show him something? Or does he haunt them? In the way he steps from the dark house and at the doorway of the glowing kitchen says to the empty fields, I am here. Come and visit me.

Title
In the Skin of a Lion
Author
Michael Ondaatje