Accessibility links
Samuel Ramey: Bad-Guy Bass Of Opera Composers seem to equate villainy with the bass voice. All the better for Samuel Ramey, whose resonant low tones have thrilled opera audiences worldwide as he plays libertines, devils and scoundrels. 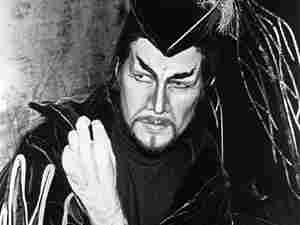 With a resonant bass voice and a muscular physique, Samuel Ramey was one of the greatest stars of the international opera circuit in his prime. He specialized in wicked characters: Don Giovanni, Faust, Mephistopheles.

"I've certainly had a lot of fun over my career playing bad guys," Ramey says.

Ramey recently celebrated the 25th anniversary of his Metropolitan Opera debut. Looking back on his career, he likes to reminisce about his roles, the weathering of his voice and even his gig on Sesame Street, which, with the advent of YouTube, can be viewed many times over by his curious 6-year-old son.

"For Boito's opera Mefistofele, I play the devil, basically," Ramey says. "And my son seems to like those things the best. I'm in a red costume, and my hair is red, and when he sees that, he calls me 'Red Daddy.' "

For years, Ramey's bread and butter, and his great love, has been singing the lecherous title role in Mozart's Don Giovanni.

"When I began, Don Giovanni was a role I dreamed of doing," Ramey says. "The singers that I admired, my idols, were famous Don Giovannis — Ezio Pinza, Cesare Sieppi. I think one of my favorite scenes in Don Giovanni is the "Champagne Aria." In my good days, I really felt I sang that aria as well as anybody."

Ramey's career is still in full swing, although he has left a few roles behind. He says nobody wants to see a 67-year-old Don Giovannni. Also, few opera stars his age still employ a vocal coach, something Ramey says is essential.

"Singers can't really hear themselves that well," Ramey says. "A singer's voice is just like an automobile: You have to have somebody take it in for a 20,000-mile checkup.

"My teacher, when I see him now, we just try to work on things to try to keep the voice from sounding the age that it is," Ramey says. "I just try to bring out what's left of the youth in the voice."