Warning: getimagesize(https://media.npr.org/books/ymrt/2009/05/herzog-7d7bfd5f51d5cfed874cbd74c8307eff0d468567.jpg): failed to open stream: HTTP request failed! HTTP/1.0 404 Not Found in /var/www/html/src/Views/CommonJsonldView.php on line 87
 Head In A Fog? Reach For 'Herzog' : NPR
Accessibility links
Head In A Fog? Reach For 'Herzog' There's a little thing author Jeffrey Eugenides does when he can't write. When he's feeling sleepy, when his head is in a fog, he reaches across his desk, digs under the piles of unanswered mail, and unearths his copy of Herzog by Saul Bellow. 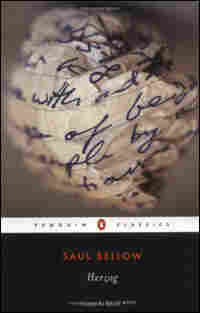 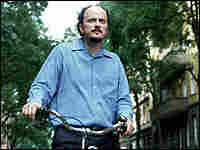 Jeffrey Eugenides' first novel, The Virgin Suicides, was published in 1993 and adapted into a motion picture in 1999 by Sofia Coppola. In 2003, he received the Pulitzer Prize for Middlesex, which was also a finalist for the National Book Critics Circle Award. He joined the faculty of Princeton University in the fall of 2007. Karen Yamauchi hide caption 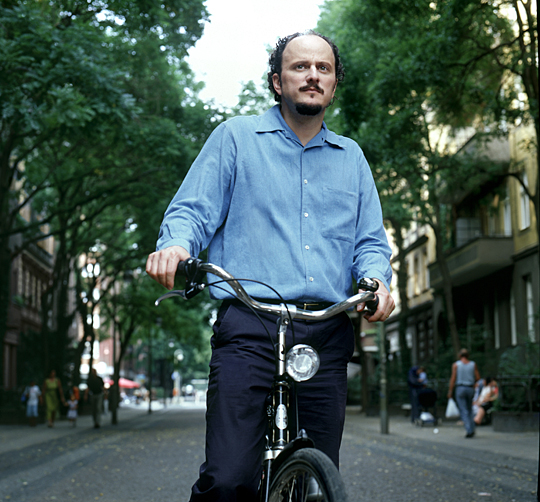 Jeffrey Eugenides' first novel, The Virgin Suicides, was published in 1993 and adapted into a motion picture in 1999 by Sofia Coppola. In 2003, he received the Pulitzer Prize for Middlesex, which was also a finalist for the National Book Critics Circle Award. He joined the faculty of Princeton University in the fall of 2007.

There's a little thing I do when I can't write: When I'm feeling sleepy, when my head is in a fog, I reach across my desk, digging under the piles of unanswered mail, to unearth my copy of Herzog by Saul Bellow. And then I open the book — anywhere-- and read a paragraph.

It always works. Right away I'm restored to full alertness and clarity. Style, in literature, has gone out of style. People think it's just ornament. But it's not: The work that goes into a writer's style, the choices that are taken, the cliches that are chucked, represent a refining of thought and feeling into their purest, most intelligent, most moral form.

Of course, there is a danger, with a great stylist, that the sentences will outclass what the sentences are about. Not with Bellow. Bellow gets the mix between form and content about as right as possible. His sentences pack maximum sensual, emotional and intellectual information into minimum space — all the while generating an involving, deeply moving story.

Published in 1964, Herzog is about a middle-aged college professor, in the midst of an emotional crisis, who begins writing letters: "He had fallen under a spell," Bellow writes, "and was writing letters to everyone under the sun. . . . Hidden in the country, he wrote endlessly, fanatically, to the newspapers, to people in public, to friends and relatives and at last to the dead, his own obscure dead, and finally the famous dead." The book zooms off from there. Herzog goes from New York, to Martha's Vineyard, to Chicago, to the Berkshires, penning his funny, serious, brilliant, self-lacerating, accusatory letters, each one acting like a new screen in a hypertext novel that opens an entirely different piece of his life: his immigrant childhood in Montreal; his indomitable ex-wife Madeleine; his numerous lady friends; his free-falling career, his pain at losing his daughter in divorce. Bellow, the supreme realist, discovered in Herzog a new form — the self-reflexive epistolary novel — without any of the obscurantism or self-preening of so-called "experimental" novels.

Herzog worried that his frantic letter-writing meant he was "out of [his] mind." But, in the last 45 years, his predicament has become universal. Herzog's life resembles the way we live now, where we're forever sending off e-mail and texts, fielding cell phone calls: where we're no longer any one place but everywhere — and nowhere — at once. Our life in shards, randomly returning.

The mark of a truly original work of art is that is gets truer the older it is.

The impulse here is to quote. Every single page of Herzog teems with jokes, apercus, deep-thinker riffs — little genius moves every other sentence. The impulse is to read the entire book out loud. But I've only got a minute here, time to make the pitch but not go nine innings.

So let me say this: If you're in the market for a safe neuro-enhancer, something to break you out of your foggy-headedness, a pill more powerful than Adderall or Provigil, with no side effects other than pleasure, then pick up Herzog and open it — anywhere — and read.

If I am out of my mind, it's all right with me, thought Moses Herzog.

Some people thought he was cracked and for a time he himself had doubted that he was all there. But now, though he still behaved oddly, he felt confident, cheerful, clairvoyant, and strong. He had fallen under a spell and was writing letters to everyone under the sun. He was so stirred by these letters that from the end of June he moved from place to place with a valise full of papers. He had carried this valise from New York to Martha's Vineyard, but returned from the Vineyard immediately; two days later he flew to Chicago, and from Chicago he went to a village in western Massachusetts. Hidden in the country, he wrote endlessly, fanatically, to the newspapers, to people in public life, to friends and relatives and at last to the dead, his own obscure dead, and finally the famous dead.

It was the peak of summer in the Berkshires. Herzog was alone in the big old house. Normally particular about food, he now ate Silvercup bread from the paper package, beans from the can, and American cheese. Now and then he picked raspberries in the overgrown garden, lifting up the thorny canes with absent-minded caution. As for sleep, he slept on a mattress without sheets—it was his abandoned marriage bed—or in the hammock, covered by his coat. Tall bearded grass and locust and maple seedlings surrounded him in the yard. When he opened his eyes in the night, the stars were near like spiritual bodies. Fires, of course; gases—minerals, heat, atoms, but eloquent at five in the morning to a man lying in a hammock, wrapped in his overcoat.

When some new thought gripped his heart he went to the kitchen, his headquarters, to write it down. The white paint was scaling from the brick walls and Herzog sometimes wiped mouse droppings from the table with his sleeve, calmly wondering why field mice should have such a passion for wax and paraffin. They made holes in paraffin-sealed preserves; they gnawed birthday candles down to the wicks. A rat chewed into a package of bread, leaving the shape of its body in the layers of slices. Herzog ate the other half of the loaf spread with jam. He could share with rats too.

All the while, one corner of his mind remained open to the external world. He heard the crows in the morning. Their harsh call was delicious. He heard the thrushes at dusk. At night there was a barn owl. When he walked in the garden, excited by a mental letter, he saw roses winding about the rain spout; or mulberries—birds gorging in the mulberry tree. The days were hot, the evenings flushed and dusty. He looked keenly at everything but he felt half blind.

His friend, his former friend, Valentine, and his wife, his ex-wife Madeline, had spread the rumor that his sanity had collapsed was it true?

He was taking a turn around the empty house and saw the shadow of his face in a gray, webby window. He looked weirdly tranquil. A radiant line went mid-forehead over his straight nose and full, silent lips.

Late in spring Herzog had been overcome by the need to explain, to have it out, to justify, to put in perspective, to clarify, to make amends.

At that time he had been giving adult-education lectures in a New York night school. He was clear enough by April but by the end of May he began to ramble. It became apparent to his students that they would never learn much about The Roots of Romanticism but that they would see and hear odd things. One after another, the academic formalities dropped away. Professor Herzog had the unconscious frankness of a man deeply preoccupied. And toward the end of the term there were long pauses in his lectures. He would stop, muttering "Excuse me," reaching inside his coat for his pen. The table creaking, he wrote on scraps of paper with a great pressure of eagerness in his hand; he was absorbed. His eyes darkly circled. His white face showed everything—everything. He was reasoning, arguing, he was suffering, he had thought of a brilliant alternative—he was wide-open, he was narrow; his eyes, his mouth made everything silently clear—longing, bigotry, bitter anger. One could see it all. The class waited three minutes, five minutes, utterly silent.

At first there was no pattern to the notes he made. They were fragments—nonsense syllables, exclamations, twisted proverbs and quotations or, in the Yiddish of his long-dead mother, Trepverter—retorts that came too late, when you were already on your way down the stairs.

No person, no death.

And, On the knees of you soul? Might as well be useful. Scrub the floor.

Next, Answer a fool according to his folly lest he be wise in his own conceit.

Answer not a fool according to his folly, lest thou be like unto him.

He noted also, I see by Walter Winchell that J.S. Bach put on black gloves to compose a requiem mass.

Herzog scarcely knew what to think of this scrawling. He yielded to the excitement that inspired it and suspected at times that it might be a symptom of disintegration. That did not frighten him. Lying on the sofa of the kitchenette apartment he had rented on 17th Street, he sometimes imagined he was an industry that manufactured personal history, and saw himself from birth to death. He conceded on a piece of paper,