Accessibility links
Study Says Jim Cramer Beat The Market, Sort Of The host of CNBC's Mad Money outpaced the S&P 500, research shows. But the finance professors who tracked Cramer's advice say his returns look less stellar when you factor in his love for risky bets. 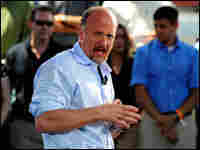 Two finance professors say Jim Cramer beat the market — but only if you ignore his penchant for risk. Rusty Jarrett/Getty Images hide caption 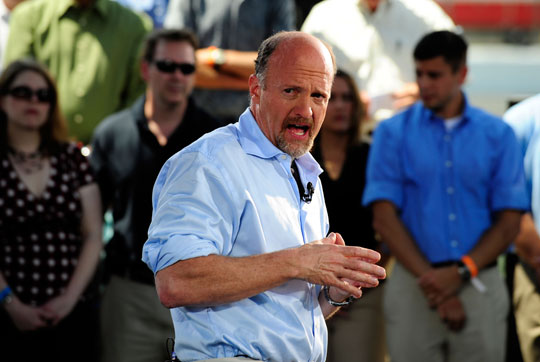 Two finance professors say Jim Cramer beat the market — but only if you ignore his penchant for risk.

See for yourself on Planet Money

On a typical episode of his show, Mad Money, Jim Cramer darts around the set in a tie with his sleeves rolled way up, taking calls from investors wanting advice. He pounds oversized buttons when he needs a sound effect.

"It's the perfect time to examine what could go wrong with this market," Cramer said the other week, sprinkling in a horn, a crash and a roar.

The CNBC host has become a national figure, prominent enough to draw the attention of finance professors Paul Bolster and Emery Trahan. They teach at Northeastern University, and they admit to not watching the show closely.

"I can't say that I'm a regular viewer," says Bolster. Trahan adds, "Mostly at the gym, on the StairMaster."

Scores of people follow Cramer's advice, so they decided to look more closely at his record of picking stocks. Bolster said he doubted that Cramer's picks would play out well over time.

"I thought, he's a spectacular entertainer and probably attracts a lot of naive investors along the way who will do whatever he says," Bolster recalls.

For their study, Bolster and Trahan considered an imaginary investment account that "bought" stock when Cramer said to buy and "sold" stock when he changed his tune. They haven't finished analyzing the recent market crash. From mid-2005 to 2007, Bolster says, Cramer beat the major stock market benchmarks, including the Dow and the S&P 500.

Cramer's annualized return was just over 12 percent, in a period when a typical S&P investor saw a return of 7.4 percent.

Those stellar returns come with an asterisk, however, that makes them seem a lot more ordinary. Cramer did beat the market, but Trahan and Bolster report that he did it by making riskier bets. They say his returns are what you might expect from buying the stock of smaller companies, which grow faster but tend to be more volatile.

Think about it this way: You can get somewhere faster by driving 100 miles an hour. But you're taking on greater risk that you'll hit a tree.

When you take that into account, say Trahan and Bolster, Cramer's "risk-adjusted return" is more in line with the market's general performance. They conclude that Cramer is neither an extraordinarily good stock picker nor an unusually bad one. In a word, he's harmless.

"I don't know how he'd think about being interpreted as a harmless guy," says Bolster. "But in the end, that's probably one way to interpret this study we have."

Trahan says their research suggests that no one can really pick the market. "It's just an awfully tough thing to do," he says, "when you're competing against people with very similar information and very similar incentives."

Cramer declined to be interviewed, but he did mention Bolster and Trahan's study on Mad Money this week. "It shows that my performance from July 25, 2005, through Dec. 31 of 2007 was. . . well, excellent!" he said.

He didn't mention the extra risk Bolster and Trahan say he took or that they think his performance wasn't so surprising.