Accessibility links
Madison Square Park: Remembering an Old, Forgotten Soldier Once upon a time, there was a well-known American soldier named Williams Jenkins Worth. His monument still stands in the heart of New York City, but while thousands pass it each day, few remember the man who lies beneath it. 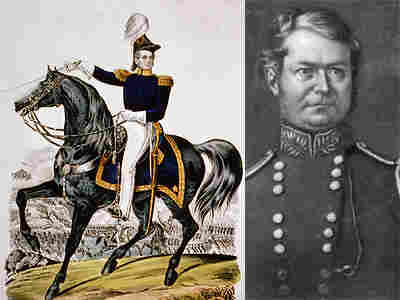 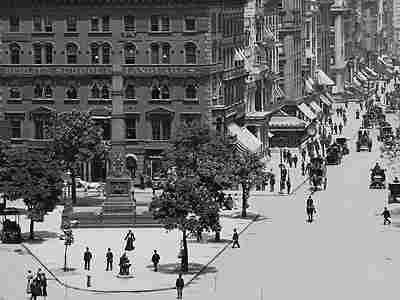 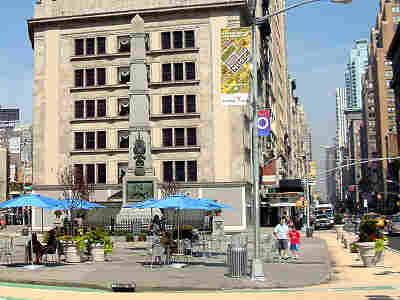 Let's you and I go for a ride.

Once upon a time, back in the year 1794, a Quaker couple in Hudson, N.Y., had a baby boy they called William Jenkins Worth. The boy was not a typical Quaker.

At age 19, he joined the U.S. Army, fought in the War of 1812 and was wounded (he caught some grapeshot in his thigh and limped ever after). He stayed in the Army, became a commandant of cadets at West Point, then served in the war against the Seminole Indians in Florida, where he was considered a gentle Indian-sympathizer. Later, he fought in the Mexican-American War at Veracruz. In the assault on Mexico City, he ran a military district in Texas, caught cholera and died.

An impressive obelisk was developed by a designer who helped create the U.S. Capitol and the Library of Congress.

The general was buried underneath the obelisk in what was a pastoral part of town in the 1850s.

Fort Worth, in Texas, was named after him. So was Lake Worth, one of the biggest lakes in Florida.

And then, inevitably, Worth's reputation began to fade. Perhaps the wars he fought are not the wars we choose to remember.

Watch this video (courtesy of VH International Business Solutions Inc.), and we'll cruise down Fifth Avenue in Manhattan, past 25th Street. As you look out the passenger window, you will see — if you look for it — a skinny stone monument; an obelisk.

It's such an odd thing to see in midtown Manhattan, you might ask, "What is that thing?"

And even if you didn't ask, I have a story for you.

By the 1990s, the obelisk — once the second-tallest structure in Manhattan, according to Hochman — was a little, ignorable sliver of stone with a Fifth Avenue bus stop on one side, a water pump hut on another, and a subway underneath. The general's body is literally suspended between buses and trains, where he is being continuously rumbled over (and under).

A Private Act Of Homage

One night not so long ago, Hochman was walking near the obelisk. It was around midnight, and he was thinking about the general.

"I was in the area and I said, 'You know, I like the guy from what I know about him. He was a good man.' And I realized it's only going to mean something to me, [so] I went to a little grocer nearby, and I paid the $4 for the cheapest flowers that they had available. And I crossed, dodging the cabs on Fifth Avenue, and I took my little flowers and kind of tossed them against the obelisk."

A fence around the monument prohibits one from laying the flowers down nicely.

Just as Hochman launched his bouquet, he noticed a squad car sitting on the curb with two police officers inside. They were looking right at him.

"Oh, they're going to ticket me for littering," he thought. He considered explaining. But he saw himself in their eyes. There he was at midnight, he says, "throwing flowers at a stone obelisk, looking deranged with my little cap on. And so I figured I'd never been handcuffed, and I don't want to know the experience."

Not what Gen. Worth would have done, but Hochman didn't fight in three wars, he just wanted to say thanks. Which he did. Quickly.

NYC Department Of Parks & Recreation's Guide To General Worth Monument