Accessibility links
Is YouTube The New MTV? The video-sharing Web site is probably best known as the place to find silly home videos of klutzy cats and clever babies. But YouTube is becoming increasingly important to the music business. 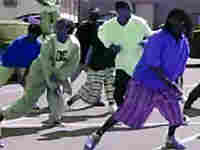 Watch "The Stanky Leg," The Video That Got The GS Boyz A Record Deal. 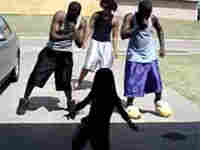 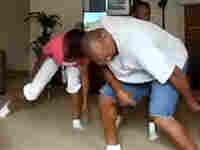 Watch Kyesha Show Her Family How To Do "The Stanky Leg" 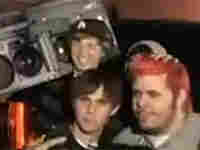 Watch A Cursive Memory's Video For "Everything" 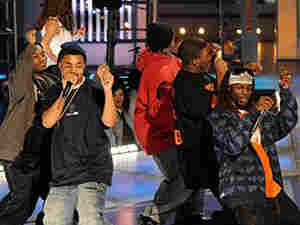 The GS Boyz' members were signed to a division of Sony after a talent scout saw the group's video for "Stanky Leg" on YouTube. Courtesy of the artists hide caption

The video-sharing Web site YouTube is probably best known as the place to find silly home videos of klutzy cats, clever babies and lip-syncing soccer moms. But YouTube is becoming increasingly important to the music business. In fact, some industry professionals say it has become the MTV of the digital generation.

In the old days, new bands created buzz by playing clubs and getting on local radio. Today, record labels often gauge a new band's popularity by looking on YouTube. Jeff Dodes, head of multimedia for a division of Sony Music, says that's where one of his talent scouts saw the video for the song "The Stanky Leg," by The GS Boyz. "The Stanky Leg" had created so much excitement on YouTube that Sony decided to sign The GS Boyz. And Dodes says that when the group makes its record for the label, he'll take The GS Boyz back to YouTube to promote it.

But once a group is signed to a label promotion teams use a number of tricks to make sure that YouTube users actually see videos by their artists. Jeremy Maciak of Vagrant Records points to a video by the label's band A Cursive Memory. Maciak says the production is simple, consisting of "the band jumping in front of paparazzi and behind velvet ropes all throughout Hollywood with a boom box on their shoulder, singing their song, which is called 'Everything.' "

The video is filled with shots of well-known celebrities, all of whom are named in the video's tags, which Maciak says garnered a lot of exposure for the video. The video was viewed hundreds of thousands of times, but not necessarily because people were looking for the song.

Music publishing executive Eric Beall says he isn't sure that all the work to get videos seen on YouTube is worth the investment for the labels.

Music videos will be on YouTube, no matter what, and it's no secret that the site is a hotbed of copyright violations. Those millions of unauthorized music videos don't make YouTube's relationship with the record industry very easy. Warner Bros. Records officially pulled all of its music off YouTube in the U.S., but it only takes a few seconds to locate the label's acts on the site.

YouTube says it wants to cooperate with labels. Analysts say YouTube still isn't making money for its parent company, Google, so they'd like to find a way for everyone to make a profit. YouTube's Chris Maxcy, a product development director, says the site is experimenting with moneymaking ideas. Now, when you're watching a video, you can buy the music by clicking through to iTunes or Amazon.

Maxcy says YouTube also has technology that will zero in on which parts of a video get the most views. Maxcy describes a scenario in which people keep replaying the first half of a video in which, for example, Aretha Franklin twirls around.

"If you're a video producer," he says, "you can say, 'OK, well, that particular dance move or that particular part of the song is obviously more popular. So we need to highlight that more.' Or, 'This wasn't popular, so let's take it out.' "

The same technology also helps a band plan its tour. If lots of people who watched the video live in Sacramento, then the band can make sure to book a show there.

Online music is an unusually volatile market: The music industry has struggled for the past decade to make it profitable. MySpace once seemed promising, but its power is on the wane. YouTube and the industry may have a limited window to try to transform YouTube's popularity into something profitable.