Accessibility links
Jonesin' For An Escape? 'Money' Hits The Spot Novelist Kate Christensen likens Janet Evanovich's One for the Money to the literary equivalent of french fries or Twinkies. But when a craving hits, sometimes comfort reading is the only thing that satisfies. 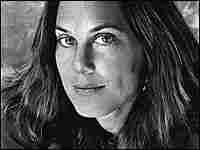 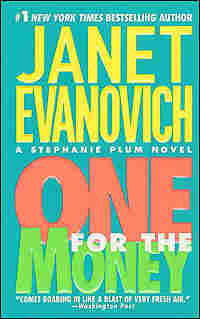 When my grandmother came down with a severe case of the flu about 10 years ago, my mother and I took turns sleeping on an air mattress in her room in the infirmary. Since my grandmother was asleep all day, we had a lot of time on our hands. One day I arrived to find that my mother had left behind a book called One for the Money by Janet Evanovich with a note attached: "Read this — it'll cheer you up."

I looked skeptically at the glitzy cover, but I always do what my mother says. The book was pure, unapologetic fluff. I was in a somber mood, but I devoured the whole thing in one night by the light of a tiny reading lamp. And my mother was right: It was the cheeriest, most life-affirming thing I could have wished for.

I finished it jonesing for more; luckily, it was the first of a series. During the ensuing stretch of dark winter days, my mother and I took turns racing happily through them all. Our Edith Wharton and Thomas Hardy novels lay unopened: Evanovich's busty, hapless, junk-food snarfing Jersey-girl heroine Stephanie Plum was our new best friend.

Stephanie is a bounty hunter whose klutzy derring-do and ditsy lustiness are rivaled only by her penchant for getting her cars blown up. As the series goes on, she finds herself torn between two equally hot men: Ranger, the mysterious, badass bounty hunter she tags along with to learn the ropes, and Joe Morelli, the sexy, soulful Italian cop who deflowered her at 16 and has come back for more.

Stephanie's sidekick, Lula, is a chubby, sweet former crack ho turned bounty hunter who wears spandex dresses two sizes too small, totes a gun and sits on people who try to run away before she can slap cuffs on them.

Between feeding my grandmother bites of applesauce and washing her face, I snorted with laughter at Evanovich's raunchy, punchy dialogue. These books contain not one high-minded thought or sophisticated turn of phrase. In fact, they could be seen as the literary equivalent of french fries or Hostess Twinkies. But sometimes junk food is exactly what's needed, and this was one of those times.

About a week before she died, my grandmother told me that she was not ready to go. Although she was 93, she had all her wits about her and was, aside from the flu, as healthy as I was. My family stood around her bed on Christmas Eve. As she took her last breath, her face lit up and she opened her arms. We drove back to my mother's house for Christmas and left the Stephanie Plum books behind for the next person who might need their laugh-out-loud, warm-hearted brand of trashiness.

Read an excerpt of One for the Money

Excerpt: 'One for the Money'

There are some men who enter a woman's life and screw it up forever. Joseph Morelli did this to me — not forever, but periodically.

Morelli and I were both born and raised in a blue-collar chunk of Trenton called the burg. Houses were attached and narrow. Yards were small. Cars were American. The people were mostly Italian descent, with enough Hungarians and Germans thrown into offset inbreeding. It was a good place to buy calzone or play the numbers. And. if you had to live in Trenton anyway, it was an okay place to raise a family.

When I was a kid I didn't ordinarily play with Joseph Morelli. He lived two blocks over and was two years older. "Stay away from those Morelli boys," my mother had warned me. "They're wild. I hear stories about the things they do to girls when they get them alone."

"What kind of things?" I'd eagerly asked.

"You don't want to know," my mother had answered. "Terrible things. Things that aren't nice."

From that point on, I viewed Joseph Morelli with a combination of terror and prurient curiosity that bordered on awe. Two weeks later, at the age of six, with quaking knees and a squishy stomach, I followed Morelli into his father's garage on the promise of learning a new game.

The Morelli garage hunkered detached and snubbed at the edge of their lot. It was a sorry affair, lit by a single shaft of light filtering through a grime-coated window. Its air was stagnant, smelling of corner must, discarded tires, and jugs of used motor oil. Never destined to house the Morelli cars, the garage served other purposes. Old man Morelli used the garage to take his belt to his sons, his sons used the garage to take their hands to themselves, and Joseph Morelli took me, Stephanie Plum, to the garage to play train.

"What's the name of this game?" I'd asked Joseph Morelli.

"Choo-choo," he'd said, down on his hands and knees, crawling between my legs, his head trapped under my short pink skirt. "You're the tunnel, and I'm the train."

I suppose this tells you something about my personality. That I'm not especially good at taking advice. Or that I was born with an overload of curiosity. Or maybe it's about rebellion or boredom or fate. At any rate, it was a one-shot deal and darn disappointing, since I'd only gotten to be the tunnel, and I'd really wanted to be the train.

Ten years later, Joe Morelli was still living two blocks over. He'd grown up big and bad, with eyes like black fire one minute and melt-in-your-mouth chocolate the next. He had an eagle tattooed on his chest, a tight-assed, narrow-hipped swagger, and a reputation for having fast hands and clever fingers.

My best friend, Mary Lou Molnar, said she heard Morelli had a tongue like a lizard.

"Holy cow," I'd answered, "what's that supposed to mean?"

"Just don't let him get you alone or you'll find out. Once he gets you alone...that's it. You're done for."

I hadn't seen much of Morelli since the train episode. I supposed he'd enlarged his repertoire of sexual exploitations. I opened my eyes wide and leaned closer to Mary Lou, hoping for the worst. "You aren't taking about rape, are you?"

"I'm talking about lust! If he wants you, you're doomed. The guy is irresistible." Aside from being fingered at the age of six by you-know-who, I was untouched. I was saving myself for marriage, or at least for college. "I'm a virgin," I said, as if this was news. "I'm sure he doesn't mess with virgins."

"He specializes in virgins! The brush of his fingertips turns virgins into slobbering mush."

Two weeks later, Joe Morelli came into the bakery where I worked every day after school, Tasty Pastry, on Hamilton. He bought a chocolate-chip cannoli, told me he'd joined the navy, and charmed the pants off of me four minutes after closing, on the floor of Tasty Pastry, behind the case filled with chocolate eclairs.

The next time I saw him, I was three years older. I was on my way to the mall, driving my father's Buick when I spotted Morelli standing in front of Giovichinni"s Meat Market. I gunned the big V-8 engine, jumped the curb, and clipped Morelli from behind, bouncing him off the front right fender. I stopped the car and got out to asses the damage. "Anything broken?"

He was sprawled on the pavement, looking up my skirt. "My leg."

"Good," I said. Then I turned on my heel, got into the Buick, and drove to the mall.

I attribute the incident to temporary insanity, and in my own defense, I'd like to say I haven't run over anyone since.

Title
One for the Money
Author
Janet Evanovich