Accessibility links
Amid Fears Of New Restrictions, Gun Sales Surge The recession has put the brakes on all sorts of industries, but the upward spike in gun sales that began about the time President Obama was elected continues. The FBI reports a strong surge in applications for background checks — the best available indicator for gun sales. 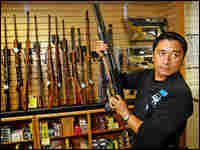 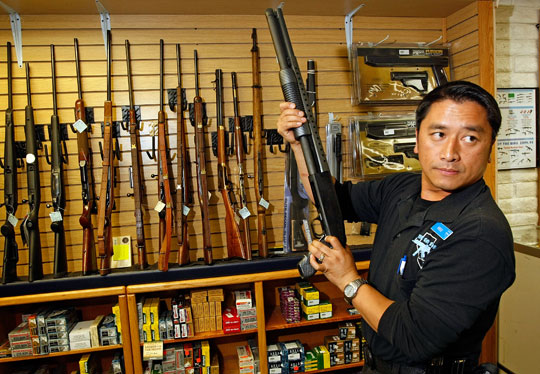 Heu Thao shows a customer a shotgun at the Gun Store in Las Vegas in November. Gun sales skyrocketed around the time of Barack Obama's election.

The recession has put the brakes on all sorts of industries, but the upward spike in gun sales that began about the time President Obama was elected continues.

In California, for example, sales over a six-month period late last year and early this year are up 32 percent from the same period a year ago. And while no national figures on gun sales are available, the FBI reports a strong surge in applications for background checks — the best available indicator.

Gun retailers, consumers and politicians on both sides of the aisle attribute the spike to the election of Barack Obama and fears that his administration and a Congress controlled by Democrats will seek new restrictions on gun ownership.

On The Ground At A Gun Show

"Everybody's a little nervous about Obama and everything that's going on with him and the legislation that John Kerry and the likes of him are trying to push through," says 25-year-old Christopher Urban. He was one of hundreds of customers jostling shoulder-to-shoulder at a recent gun show in Chantilly, Va., browsing among thousands of pistols, rifles and shotguns across tables.

Urban, who works in federal law enforcement, bought a Walther PPS .40-caliber handgun at the show. It wasn't his first choice though: He wanted the 9 mm version, but there were none to be found. "It has been a little bit harder to get things and the prices have gone up significantly," he says.

Jim Golden, an arms merchant based in Ivor, Va., agrees. Business is "probably 60 percent higher than it was a year ago," he says. "Sixty percent at least."

Background checks are required for all gun sales through federally licensed dealers. During the last quarter of 2008, background checks skyrocketed to more than 4.2 million — their highest level in a decade, according to the FBI. For the first quarter of 2009, the number fell a little bit, but it's still far above where it was last year.

One reason for that may be the prevalence of videos like one on YouTube posted by the gun rights group Americans for Gun Safety. "Remember candidate Barack Obama," a narrator says, "the guy who wasn't going to take our guns away?" The video then cuts to a clip of the president. "I will not take your shotgun away, I will not take your rifle away, I won't take your handgun away," Obama says. The narrator concludes by saying: "Well, guess what? Less than 100 days into his administration and President Obama appears ready to eradicate the Second Amendment rights of law-abiding Americans."

Anxieties About President Obama And Congress

Democratic politicians say these messages are fueling anxieties about the new president and the new Congress: "I think many gun dealers are using it as a marketing tool, playing on the unreasonable fears that people have that Congress is going to go too far," says Sen. Dick Durbin (D-IL).

Durbin notes that in some ways Congress has been moving in the opposite direction, notably with a measure signed by the president in May allowing people with the necessary permits to carry concealed, loaded weapons in national parks.

That may be because the public has taken a conservative turn when it comes to gun control, according to a recent survey by the Pew Research Center for the People and the Press.

"A year ago, we had a solid majority, 58 percent, saying it was more important to control gun ownership than to protect the right to own guns," says Carroll Doherty, associate director for editorial projects with the Pew Center. "And now opinion is almost evenly divided. It's a pretty striking shift in a very short period of time — only a year."

It's a shift that has not gone unnoticed by congressional Democrats and the president.

Still, legislation was introduced in Congress this spring to close the so-called gun show loophole. The Gun Show Background Check Act of 2009 would require federal background checks for all sales at gun shows. In some states, it's possible for individuals to sell guns from their personal collection to others without having to run background checks on the purchaser.

Durbin, a co-sponsor of the legislation, says he supports a national standard. "Many guns are sold to people without any questions asked about criminal records or mental instability," he says. But he's also a pragmatist about its chances: "I believe it's an uphill battle to pass that legislation."