Accessibility links
This Just In ... If You Dare To Watch The televised death of a young woman on a street in Tehran represents an important moment for media and for the technology that delivers what we call news today.

This Just In ... If You Dare To Watch

This Just In ... If You Dare To Watch 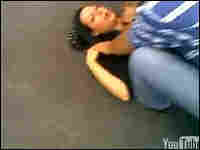 A cell phone video of a woman who died in Tehran spread quickly on the Internet and television. YouTube.com hide caption

The video was so graphic that CNN was compelled to put up a rare black-screen warning before showing it. The images of a young woman bleeding to death on a street in Tehran were haunting and, indeed, as disturbing as the network warned.

As with many other images from Tehran during the past week of demonstrations, the video, captured by a bystander's cell phone camera, quickly made its way onto YouTube, Twitter and Facebook, and out into the blogosphere.

And with journalists barred from covering the protests, TV news programming was relying on social networks and the Internet for fresh news out of Iran. Yes, we are told by the network, we can't verify the authenticity of these images, or even precisely when and where they were taken. But we've got them right here, so let's click and watch ...

Forget the political message it sends about what's going on in Iran. The broadcast of the dying moments of a woman called Neda, who reportedly had been shot during anti-government protests, also represents an important moment for media and for the technology that delivers what we call news today.

We might flinch, but we are now willing to watch someone die on television. For real. Not just as a work of dramatic fiction.

Whether or not the networks' standards are loosening, it is clear they are feeling pressure from the unfiltered, digitally viral world of the Internet.

It has taken decades, and the advent of new technology, for this situation to evolve. After all, it took days for stills from the Zapruder film showing the assassination of President Kennedy to be made public in Life magazine. (It was years later before the film itself was shown.) Footage on nightly news reports from Vietnam was delayed for several hours or days while the film was flown back for later broadcast. Satellite video phones brought us the Iraq war in real time, but the images were still filtered or delayed by the networks.

We are now on the cusp of live, unfiltered video coverage from citizen journalists around the world. Services like Qik.com allow us to stream video live from our cell phones. It's only a matter of time before we'll see HD-quality video transmitted live wherever cell phone coverage is available. And broadband wireless will spread that capability far and wide.

So where does that leave us? Thanks to readers' and viewers' changing habits and competition from the Internet, the gatekeeping roles of print and broadcast journalism have been redefined. They are no longer the sole arbiters of what's proper for the masses to read, see and hear.

That unforgettable video showing the death of a young Iranian woman is only the latest evidence of that.