Accessibility links
Let There Be Bike Shorts: A Profile In Comics-Geek Courage Who wears the pants — well, the shorts, anyway — in the Super-family? Until very recently, it wasn't Supergirl.

Let There Be Bike Shorts: A Profile In Comics-Geek Courage

Let There Be Bike Shorts: A Profile In Comics-Geek Courage 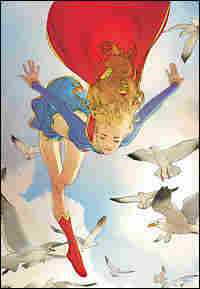 Supergirl: Doesn't she look happy about the news that she gets to wear pants now? DC Comics hide caption

Last week, we learned about a man possessed of a bold and praiseworthy vision. With a single editorial edict, this brave iconoclast dispensed with venerated tradition and blazed a new path, knowing only too well that his decision might unleash a frothing nerdstorm of outrage.

The man in question: DC Comics editor Matt Idelson. The pronouncement he issued was just eight words long, but such is its paradigm-shattering power that it will surely stand one day in the annals of comic book history, alongside "With great power comes great responsibility," "Truth, Justice and the American Way," and "Shazam!"

And with that, the character of Supergirl — in a stark departure from many years of institutionalized cheesecakery — started wearing red shorts under her skirt.

It's not a big deal, but it's a pretty big deal, and here's why:

1. The decision suggests that superhero comics may at long last stand ready to evolve beyond the adolescent objectification of the female form in which they have so gleefully wallowed for long decades; and

2. Supergirl flies, duh. She hovers over people's heads. In a skirt.

After the jump: Hot pants, headbands, belly-shirts and other petty indignities foisted upon the Maid of Might over her long and storied career.

With this, as with many history making moments, we must rely on a second-hand account: Current Supergirl artist Jamal Igle cites Idelson's super-panties ban in this nifty — and niftily titled — interview with Matt Brady, on the comic news site Newsarama.com.

It's important to fit this latest development in its proper historical context. Unlike her cousin Superman, who's trounced around in the same circus acrobat number since the 1930's, Supergirl has changed her costume many times over the years. Maybe because she's ostensibly a teenager, and thus eagerly adopts the fashion of the times? Yeah, I don't know.

This has led to a series of predictable, but no less aesthetically punishing, sartorial decisions. I'd walk you through these myself, but the Internet's a big place, and this job has already been done, with considerable wit and grace, by Girl-wonder.org.

You'll need to keep clicking through to get up to the present, but it's worth it. I'd urge you to really linger over the second page, if only to let the sheer ineluctable suckiness of the 80's frizzy perm/headband costume sink in.

While you're there, spend some time on comics artist Dean Trippe's livejournal page, which offers links to many alternate Supergirl costume designs from a 2007 contest co-sponsored with www.projectrooftop.com, a site entirely devoted to superhero fashion. (See above, in re: Internet, size of.)

As the girl-wonder folks note, when Supergirl was reintroduced into continuity back in '04, she wore an outfit that might as well have been designed by a committee of pimps and 14-year-old boys, complete with a miniskirt that was somehow permanently stuck in Seven-Year-Itch mode.

It was little more than a thin bolt of blue fabric — the comic-book equivalent of those long white banners that forever fluttered in the air above Renaissance Italy to keep folk from glimpsing the full cherubim monty.

She was also drawn in a manner openly defiant of the physical laws of human anatomy: Girlfriend was basically an esophagus with hip bones.

But things have been looking up for her of late. In her current series, the fantastically named writer Sterling Gates is doing good work supplying the character with depth and intelligence while downplaying some of the vampy-trampy aspects she got saddled with upon her return.

Meanwhile, artist Igle has given her a real, physiologically plausible body, outfitted in a costume that is growing steadily less, in the artist's words, "hoochie."

We've discussed the whole women and comics thing before, and as much as I'd like to believe that the advent of super-bike-shorts signals a industry-wide shift toward the Something-Less-Than-Cringeworthy, there is still Witchblade.

And there's the fact that she's still wearing a skirt at all. Can someone not hook this young woman up with something in a nice athletic pant, already?

Still and all: We salute DC Comics editor Matt Idelson and his creative team, for their dedication to creating something that's proven maddeningly elusive, something we've needed for years: a Supergirl comic you can recommend to a teenage girl without feeling the least bit To Catch a Predator about it.