Accessibility links
John Vanderslice: Abandoning The Familiar Vanderslice addresses loneliness, lost love and alienation, and along the way, finds freedom by leaving the familiar for the unknown. 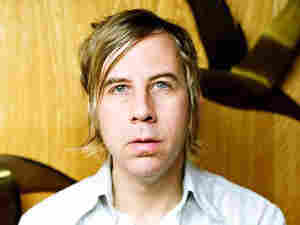 John Vanderslice's "Too Much Time" overflows with wickedly catchy melodies and quirky instrumentation. courtesy of the artist hide caption

Few artists can claim that they're just hitting their stride with their seventh album. It's a testament to prolific songwriter and producer John Vanderslice that each of his records — especially the past two, Pixel Revolt and Emerald City — has been better than the one before it. So it comes as no great shock that Vanderslice's newest album, Romanian Names, is his best yet.

Vanderslice has long displayed a workmanlike devotion to his craft, as he hones his crisp production and fine-tunes his songs until fully realized. Like previous albums, Romanian Names overflows with wickedly catchy melodies, quirky (but never saccharine or cutesy) arrangements and a compelling mix of acoustic and electronic instrumentation. But above all, it's Vanderslice's thoughtful lyrics that draw attention in standouts like "D.I.A.L.O." and "Fetal Horses."

Another highlight of Romanian Names, "Too Much Time," represents a perfect example of Vanderslice's work process. While early iterations of the song were performed acoustically with little accompaniment, it evolved on the record, taking on a much darker and more cinematic tone. As the song developed, it picked up a mix of electronic drums and new-wave synths — almost Cure-like in spots. "Stone by stone, I left my only home / and brick by brick, walled myself from happiness," Vanderslice sings, addressing loneliness, lost love and alienation in the process. Along the way, he finds freedom by leaving the familiar for the unknown.