Accessibility links
A Delightfully Evil Tale Of Pirates And Children Finding a book that makes you feel like a kid again is no easy feat, but author Andrew Sean Greer says he found just that in Richard Hughes' A High Wind in Jamaica. 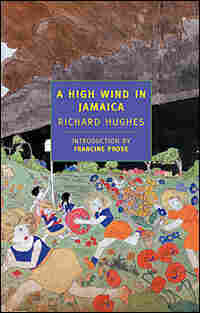 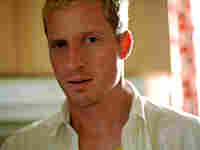 Andrew Sean Greer is the author of The Story of a Marriage and The Confessions of Max Tivoli, among other works of fiction. He lives in San Francisco a few houses down from his identical twin brother, who often takes advantage of their resemblance in order to commit diamond heists and pin them on Andrew. Anything you hear to the contrary is a web of deceit. Courtesy of Andrew Sean Greer hide caption

A few years ago, I was telling everyone I knew that I wished I could recapture the feeling about literature I had when I was young. Back then, reading great fiction never felt like work — it was a very private kind of joy.

Then a close friend, the writer Daniel Handler, handed me Richard Hughes' 1929 novel A High Wind in Jamaica, which had recently (and beautifully) been republished by The New York Review of Books.

I took the book with me to the Yaddo Artist Colony in upstate New York, where I was at work on a new novel, and one snowy day I read the whole thing in one gulp.

It was remarkable. Tiny. Crazy. I felt just like I did as a kid.

To say A High Wind in Jamaica is a novel about children who are abducted by pirates is to make it seem like a children's book. But that's completely wrong; its theme is actually how heartless children are.

The story begins almost whimsically in Jamaica, with five English children surviving a hurricane. Later on, as the ship is returning to Europe, we enter Treasure Island territory when the vessel is boarded by pirates.

Here's where it gets good, because the pirates and the children begin to switch places. At first the pirates are the brutal ones, drinking heavily and throwing people overboard as pirates will. But the children have such a deformed sense of right and wrong that it's soon the pirates who are frightened of them.

Eventually our heroine, little Emily, murders a man in cold blood — to the pirates' dismay. And when the children are at last rescued to England, our Emily performs one final bit of cruelty as simply as throwing a tea party for her dolls.

Some books inspire one to read, and some inspire one to write; for selfish reasons, I'm always looking for the latter. I'm greedy for fresh storytelling, and that's why I return time and again to A High Wind in Jamaica.

I'm like a thief visiting a rare diamond he dreams one day of stealing, and the passage I would most like to lift comes late in the book, when little Emily, ending her reign of terror, lies bed-bound on the rescue ship with a pet baby alligator on her chest. The two monsters stare into each others' eyes. Then, to Emily's delight, the tiny creature bites her and crawls into her dress to fall asleep.

"It is surprising," we are told, "that she could stand it, as she did, without flinching."

There is a chilling blank space below this sentence, and then this: "Alligators," the narrator informs us, "are utterly untamable."

So, it seems in this astounding little parable, are children; still savage, they simply vanish inside the adults they will become.

A High Wind in Jamaica is like those books you used to read under the covers with a flashlight — only infinitely more delicious ... and macabre.

You Must Read This is produced by Ellen Silva.

Excerpt: 'A High Wind in Jamaica'

It was the custom that, whenever Mr. Thornton had been to St. Anne's, John and Emily should run out to meet him, and ride back with him, one perched on each of his stirrups.

That Sunday evening they ran out as soon as they saw him coming, in spite of the thunderstorm that by now was clattering over their very heads—and not only over their heads either, for in the Tropics a thunderstorm is not a remote affair up in the sky, as it is in England, but is all round you: lightning plays ducks and drakes across the water, bounds from tree to tree, bounces about the ground, while the thunder seems to proceed from violent explosions in your own very core.

"Go back! Go back, you damned little fools!" he yelled furiously: "Get into the house!"

They stopped, aghast: and began to realize that after all it was a storm of more than ordinary violence. They discovered that they were drenched to the skin—must have been the moment they left the house. The lightning kept up a continuous blaze: it was playing about their father's very stirrup-irons; and all of a sudden they realized that he was afraid. They fled to the house, shocked to the heart: and he was in the house almost as soon as they were. Mrs. Thornton rushed out:

"I've never seen such a storm! Why on earth did you let the children come out?"

"I never dreamt they would be so silly! And all the time I was thinking—but thank Heaven you're back!"

"I think the worst is over now."

Perhaps it was; but all through supper the lightning shone almost without flickering. And John and Emily could hardly eat: the memory of that momentary look on their father's face haunted them.

It was an unpleasant meal altogether. Mrs. Thornton had prepared for her husband his "favorite dish": than which no action could more annoy a man of whim. In the middle of it all in burst Sam, ceremony dropped: he flung the handkerchief angrily on the table and stumped out.

But John and Emily knew: and thoroughly agreed with Sam as to the cause of the storm. Stealing was bad enough anyway, but on a Sunday!

Meanwhile, the lightning kept up its play. The thunder made talking arduous, but no one was anyhow in a mood to chatter. Only thunder was heard, and the hammering of the rain. But suddenly, close under the window, there burst out the most appalling inhuman shriek of terror.

"Tabby!" cried John, and they all rushed to the window.

But Tabby had already flashed into the house: and behind him was a whole club of wild cats in hot pursuit. John momentarily opened the dining-room door and puss slipped in, disheveled and panting. Not even then did the brutes desist: what insane fury led these jungle creatures to pursue him into the very house is unimaginable; but there they were, in the passage, caterwauling in concert: and as if at their incantation the thunder awoke anew, and the lightning nullified the meager table lamp. It was such a din as you could not speak through. Tabby, his fur on end, pranced up and down the room, his eyes blazing, talking and sometimes exclaiming in a tone of voice the children had never heard him use before and which made their blood run cold. He seemed like one inspired in the presence of Death, he had gone utterly Delphic: and without in the passage Hell's pandemonium reigned terrifically.

The check could only be a short one. Outside the door stood the big filter, and above the door the fanlight was long since broken. Something black and yelling flashed through the fanlight, landing clean in the middle of the supper table, scattering the forks and spoons and upsetting the lamp. And another and another—but already Tabby was through the window and streaking again for the bush. The whole dozen of those wild cats leapt one after the other from the top of the filter clean through the fanlight onto the supper table, and away from there only too hot in his tracks: in a moment the whole devil-hunt and its hopeless quarry had vanished into the night.

They were gone. The lightning behind the creepers in the jungle lit them up like giant cobwebs: but of Tabby and his pursuers there was nothing to be seen.

John burst into tears, the first time for several years, and flung himself on his mother: Emily stood transfixed at the window, her eyes glued in horror on what she could not, in fact, see: and all of a sudden was sick.

"God, what an evening!" groaned Mr. Bas-Thornton, groping in the darkness for what might be left of their supper.

Shortly after that Sam's hut burst into flames. They saw, from the dining-room, the old negro stagger dramatically out into the darkness. He was throwing stones at the sky. In a lull they heard him cry: "I gib it back, didn't I? I gib de nasty t'ing back?"

Then there was another blinding flash, and Sam fell where he stood. Mr. Thornton pulled the children roughly back and said something like "I'll go and see. Keep them from the window."

Then he closed and barred the shutters, and was gone.

John and the little ones kept up a continuous sobbing. Emily wished some one would light a lamp, she wanted to read. Anything, so as not to think about poor Tabby.

I suppose the wind must have begun to rise some while before this, but now, by the time Mr. Thornton had managed to carry old Sam's body into the house, it was more than a gale. The old man, stiff in the joints as he might have been in life, had gone as limp as a worm. Emily and John, who had slipped unbeknownst into the passage, were thrilled beyond measure at the way he dangled: they could hardly tear themselves away, and be back in the dining-room, before they should be discovered.