Accessibility links
A Neighborhood Enterprise For The 21st Century Years ago, at-home service was common. From New York to California there are now repair people who will pull up in their vans, and, in just a few minutes, fix your mp3 player, or your iPhone.

Demetri Leontaris stands by the van that advertises — and houses - his business. Margot Adler/NPR hide caption

Generations ago, bottles of milk were delivered to your door and knife sharpeners called out their services in city neighborhoods. In most places those things are part of the past, but the 21st century has its own version of such neighborhood enterprises: from New York to California there are now repair people who will pull up in their vans, and, in just a few minutes, fix your mp3 player, or your iPhone; they might even get you a new LCD screen for your laptop. 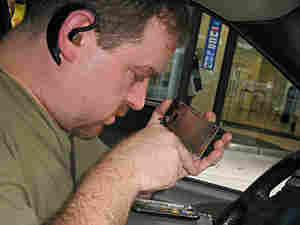 Demetri Leontaris sometimes calls himself the "iPod Doctor" and the license plate on his van that says exactly that. But the first thing you notice is how many people come up to his van and ask him for a business card. Leontaris repairs cell phones, laptops and digital music players, and he says his business got started by chance. He loved the iPod when it came out; he bought a broken one, but he found Apple's repair prices too steep. So he bought another broken iPod for the parts, took them both apart, and fixed one of them. Before he knew it, he "kept on finding people with broken iPods, who wanted to get them fixed." In fact he says that most people are amazed. They had no idea they could get their Blackberries, or iPods fixed.

A Fix For Every Electronic Woe

Whether your mp3 player has a cracked screen, or you mistakenly put your jeans in the laundry with your iPod in the jeans pocket, Leontaris generally has a fix. He sees ten to fifteen clients a day and has two technicians working for him. He picks up his phone which rests on his knee in the van. "Hi Eddie," he says, "I am here I am at 86th and Third right by the Banana Republic; it's across the street from the Papaya king, can't miss me." Eddie Gonzales is his next client. He brings two broken iPods and hands them through the van window.

Leontaris sits behind the wheel in his black van; his seat belt is buckled. He has a tiny silver tool kit, the size of a lunch box that sits on his lap and also acts as a work table. One of the iPods needs a new battery, which has to be sodered in the shop. The click wheel is broken on the other one, a relatively easy fix. "There's a rubber piece behind the button that slipped down, out of place, so we are going to put it back in place now," Leontaris says. He takes out the tiny screws with a miniature screwdriver, and within five minutes the job is done.

Gonzales found the iPod doctor on the internet. He read a few nice reviews and was sold.

Leontaris says his business goes in cycles. Right before school goes back in session, he gets lots of calls from students who want their laptops fixed. Winter break and spring break are also hot times. The worst time is right before Christmas because people are waiting to see what they will get. "I have had people tell me on the phone," he says, "let me see if I get a new one for Christmas and I will call you back next week."

But although the business has its ups and downs, Leontaris says business has doubled since the downturn in the economy.

Demetri Leontaris calls up his next client who meets him only a few blocks away. Her name is Shante King and she is 23 years old, and she has an iPhone that is totally cracked. She admits with a laugh that she sat on her bag and crushed the phone. He takes out a new LED screen. Again, he does the whole operation in the car; within about ten minutes, the iPhone looks like new. Cost: Ninety-nine dollars for parts and service.

He says that people really like to have stuff fixed; they don't like to waste. "I am giving people back their music, their videos and sometimes even their sanity," he says.