Accessibility links
War On Terror, Katrina Intersect In 'Zeitoun' Abdulrahman Zeitoun was arrested just after Hurricane Katrina hit New Orleans. The Syrian immigrant had lived in the city for more than 20 years. Author Dave Eggers says Zeitoun found himself in "a perfect intersection" between a natural disaster and the war on terrorism.

Abdulrahman Zeitoun was arrested just after Hurricane Katrina hit New Orleans. The Syrian immigrant had lived in the city for more than 20 years. Author Dave Eggers says Zeitoun's story is "a perfect intersection between the war on terror and the worst disaster in American history."

Eggers' new book, Zeitoun, describes a post-catastrophic New Orleans where the rule of law gives way to suspicion and fear.

After mistaking Zeitoun and three other men for looters, members of the National Guard took Zeitoun, a muslim, to "Camp Greyhound" — a series of cages set up outside a Greyhound bus station. As a guest of Homeland Security, Zeitoun remained in detention for weeks.

Zeitoun had been traveling the flooded streets of New Orleans, checking on his business properties and helping victims when he was arrested.

Zeitoun's captors taunted him, calling him al-Qaida and Taliban. His wife Kathy and their children weren't notified of his location. When he was finally released, he was charged with possession of stolen property — a charge that was eventually dropped.

Zeitoun and his family have since returned to New Orleans to help rebuild the city, but the memories of his detention still haunt them.

Zeitoun sometimes finds his "head turns upside down," he says, when he thinks of what happened to him. Kathy is also prone to anxiety attacks. Telling their story to Eggers, she says, has been an essential part of the healing process.

Read an excerpt of Zeitoun 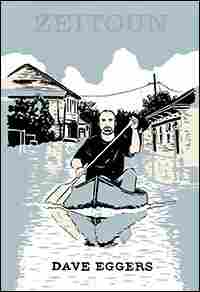 On moonless nights the men and boys of Jableh, a dusty fishing town on the coast of Syria, would gather their lanterns and set out in their quiet est boats. Five or six small craft, two or three fishermen in each. A mile out, they would arrange the boats in a circle on the black sea, drop their nets, and, holding their lanterns over the water, they would approximate the moon.

The fish, sardines, would begin gathering soon after, a slow mass of silver rising from below. The fish were attracted to plankton, and the plankton were attracted to the light. They would begin to circle, a chain linked loosely, and over the next hour their numbers would grow. The black gaps between silver links would close until the fishermen could see, below, a solid mass of silver spinning.

Abdulrahman Zeitoun was only thirteen when he began fishing for sardines this way, a method called lampara, borrowed from the Italians. He had waited years to join the men and teenagers on the night boats, and he'd spent those years asking questions. Why only on moonless nights? Because, his brother Ahmad said, on moon-filled nights the plankton would be visible everywhere, spread out all over the sea, and the sardines could see and eat the glowing organisms with ease. But without a moon the men could make their own, and could bring the sardines to the surface in stunning concentrations. You have to see it, Ahmad told his little brother. You've never seen anything like this.

And when Abdulrahman first witnessed the sardines circling in the black he could not believe the sight, the beauty of the undulating sil- ver orb below the white and gold lantern light. He said nothing, and the other fishermen were careful to be quiet, too, paddling without motors, lest they scare away the catch. They would whisper over the sea, telling jokes and talking about women and girls as they watched the fish rise and spin beneath them. A few hours later, once the sardines were ready, tens of thousands of them glistening in the refracted light, the fishermen would cinch the net and haul them in.

They would motor back to the shore and bring the sardines to the fish broker in the market before dawn. He would pay the men and boys, and would then sell the fish all over western Syria — Lattakia, Baniyas, Damascus. The fishermen would split the money, with Abdulrahman and Ahmad bringing their share home. Their father had passed away the year before and their mother was of fragile health and mind, so all funds they earned fishing went toward the welfare of the house they shared with ten siblings.

Abdulrahman and Ahmad didn't care much about the money, though. They would have done it for free.

Thirty-four years later and thousands of miles west, Abdulrahman Zeitoun was in bed on a Friday morning, slowly leaving the moonless Jableh night, a tattered memory of it caught in a morning dream. He was in his home in New Orleans and beside him he could hear his wife Kathy breathing, her exhalations not unlike the shushing of water against the hull of a wooden boat. Otherwise the house was silent. He knew it was near six o'clock, and the peace would not last. The morn- ing light usually woke the kids once it reached their second-story windows. One of the four would open his or her eyes, and from there the movements were brisk, the house quickly growing loud. With one child awake, it was impossible to keep the other three in bed.

Kathy woke to a thump upstairs, coming from one of the kids' rooms. She listened closely, praying silently for rest. Each morning there was a delicate period, between six and six-thirty, when there was a chance, however remote, that they could steal another ten or fifteen min- utes of sleep. But now there was another thump, and the dog barked, and another thump followed. What was happening in this house? Kathy looked to her husband. He was staring at the ceiling. The day had roared to life.

The phone began ringing, today as always, before their feet hit the floor. Kathy and Zeitoun — most people called him by his last name because they couldn't pronounce his first — ran a company, Zeitoun A. Painting Contractor LLC, and every day their crews, their clients, every- one with a phone and their number, seemed to think that once the clock struck six-thirty, it was appropriate to call. And they called. Usually there were so many calls at the stroke of six-thirty that the overlap would send half of them straight to voicemail.

Kathy took the first one, from a client across town, while Zeitoun shuffled into the shower. Fridays were always busy, but this one prom- ised madness, given the rough weather on the way. There had been rumblings all week about a tropical storm crossing the Florida Keys, a chance it might head north. Though this kind of possibility presented itself every August and didn't raise eyebrows for most, Kathy and Zeitoun's more cautious clients and friends often made preparations. Throughout the morning the callers would want to know if Zeitoun could board up their windows and doors, if he would be clearing his equipment off their property before the winds came. Workers would want to know if they'd be expected to come in that day or the next.

All proceeds from the sale of Zeitoun go to a foundation to rebuild New Orleans.