Accessibility links
Why Do Doubts About Obama's Birthplace Persist? Despite ample evidence that President Obama was born in Hawaii, the so-called birthers movement won't end. One GOP congressman has even introduced a bill requiring candidates in the 2012 presidential race to provide a birth certificate.

Why Do Doubts About Obama's Birthplace Persist?

Why Do Doubts About Obama's Birthplace Persist? 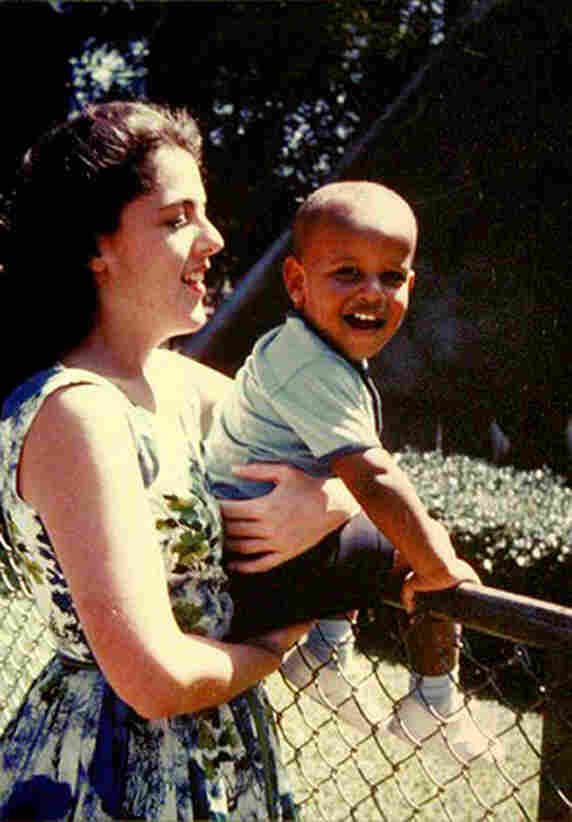 This photo provided by President Obama's campaign shows Obama with his mother, Ann Dunham, in an undated photo from the 1960s. Dunham met Obama's father, Barack Obama Sr., from Kenya, when both were students at the University of Hawaii at Manoa; they married in 1960. Obama Presidential Campaign/AP hide caption 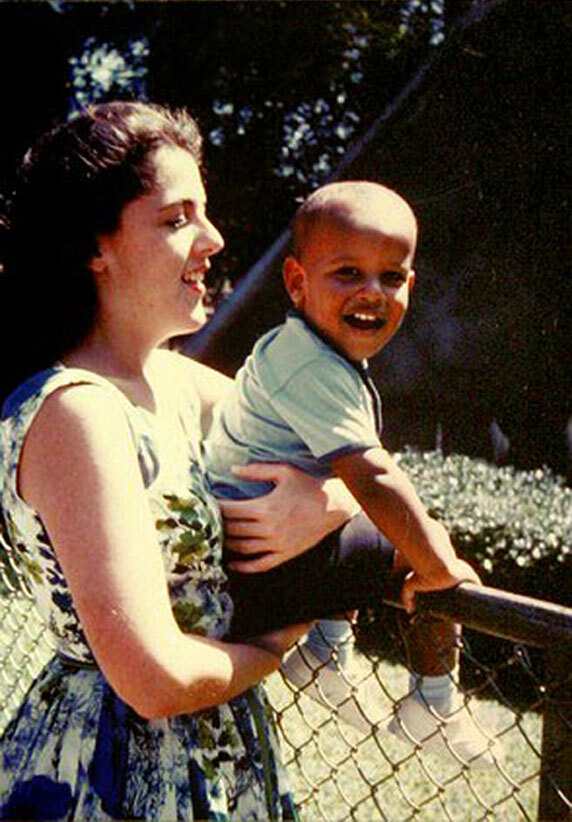 This photo provided by President Obama's campaign shows Obama with his mother, Ann Dunham, in an undated photo from the 1960s. Dunham met Obama's father, Barack Obama Sr., from Kenya, when both were students at the University of Hawaii at Manoa; they married in 1960.

Barack Obama was still a long-shot presidential candidate when he posted copies of his Hawaii-issued birth certificate online to satisfy fringe conspiracists who claimed he wasn't born in the United States.

Public service "fact check" Web sites responding to persistent right-wing agitators confirmed nearly a year ago that the certificate is authentic; they turned up a 1961 item in The Honolulu Advertiser announcing the Aug. 4 birth of a son to "Mr. and Mrs. Barack H. Obama of Kalanianaole Hwy."

And though it could hamstring show host Lou Dobbs, CNN's very own Obama-birthplace skeptic, the network's President Jon Klein — after a "reinvestigation of the fable" — proclaimed the so-called birthers story dead.

Evidence, in fact, has been proved to feed conspiracies, rather than kill them. Just ask former President Bill Clinton and Secretary of State Hillary Clinton: They found that three official investigations confirming that top aide Vince Foster committed suicide failed to tamp down theories that Foster was murdered — and that the first couple just maybe had a hand in it.

"For people who tend to gravitate to these views, there is simply no evidence that will satisfy them, because they believe that all of the institutions that supply a report are part of the conspiracy," says Michael Barkun, author of A Culture of Conspiracy.

Indeed, in a nod to the birthers — and with an eye on the 2012 national race, when Obama will most likely run for re-election — Republican Rep. Bill Posey of Florida and nine GOP co-sponsors have submitted a bill that would require presidential candidates to provide a birth certificate. 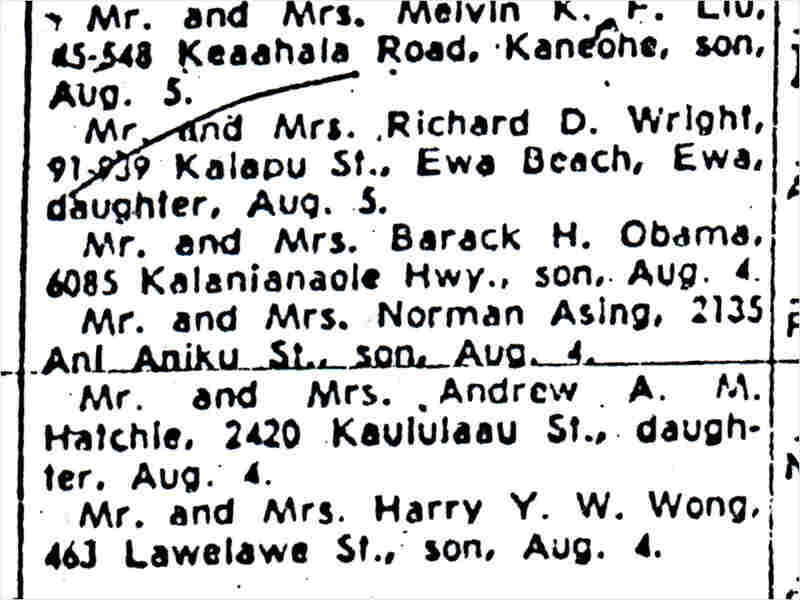 Keeping the story alive, and trying to invalidate the first African-American president (one with a Kenyan-born father) — well, that's the point, says Jerrold Post, director of the political psychology program at George Washington University's Elliott School of International Affairs.

"This whole us-versus-them psychology is central to politics, and hate-mongering leaders will exploit this to the fare-thee-well," Post says. 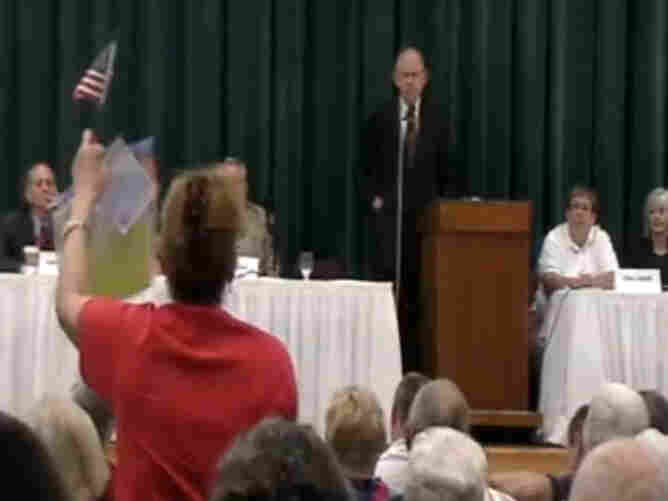 History provides a suitcase full of cases that show evidence can't kill a conspiracy theory, especially one rooted in politics and identity, no matter how outlandish.

From the founding of the country, there were conspiracy theorists who believed that world events were being controlled by the secret "Illuminati" society, a stubborn theory reinvigorated in recent years by author Dan Brown's books, including The Da Vinci Code.

Similar puppet-master conspiracy theories have arisen around The Bilderberg Group and the Trilateral Commission, international consortiums of business and political leaders.

There are fringe groups that still assert the moon landing was a hoax, that no plane crashed into the Pentagon on Sept. 11, 2001, and that President George W. Bush had advance notice of the terrorist attacks on New York City and Washington.

But the birthers have been born into a new society, technologically speaking.

Paranoia is the most political of mental illnesses. You need to have enemies.

"Their conspiracy theory is garden variety in the sense that it's a simple idea that can be readily disproven," says Barkun, a Syracuse University professor. "The difference, I think, lies in the fact that it has emerged at a time when the communications environment permits it to be disseminated extremely rapidly to large numbers of people by the Internet, YouTube, and cable television," he says.

Aside from Dobbs' show, the birthers movement has also found an audience on YouTube, thanks to a video of a screaming woman confronting Delaware Rep. Mike Castle, who is considering a run for the Senate, at a home state forum for constituents.

More than 710,000 YouTube visitors have watched the unidentified woman hold aloft a plastic bag that she says contains her birth certificate, while she demands to know why "you people are ignoring his birth certificate."

"He is not an American citizen," she screams. "He is a citizen of Kenya. I want my country back."

Castle responds: "If you're referring to the president there, he is a citizen of the United States." Castle is booed.

What most people would view as truly bizarre, conspiracy theorists find energizing.

It would be easy to dismiss the screaming woman and other birther adherents as mentally unhinged. Some on the left have taken pains to note that James Von Brunn, the suspect in the June murder of a Holocaust Museum guard, ascribed to the birther conspiracy.

"If one were to say, hypothetically, that they had some medical problem, that would get us off the hook very easily," Barkun says.

However, political psychologist Post does not discount the role that paranoia plays in the world of conspiracy theories.

"The quality of paranoia is not strained," he says, paraphrasing Shakespeare's Portia. "It rains from the gentle heavens."

"Paranoia is the most political of mental illnesses," Post says. "You need to have enemies."

There is no single explanation as to why psychologically normal people attach themselves to disproved conspiracies. Some may find comfort in contemplating a cabal: It provides a sense that they know the truth about how the world is organized — and others don't, experts say.

The birthers may also be driven by Obama's mixed race, his international upbringing, and the economic uncertainty that has settled over the nation.

"The story that these folks tell is based on the idea that Obama is an illegitimate president," says Mark Fenster, author of Conspiracy Theories: Secrecy and Power in the American Culture.

"Any evidence of legitimacy would spoil the narrative, and that would end the pleasure of spinning out the narrative," says Fenster, an associate dean at the University of Florida's Levin College of Law.

End the narrative, and the spotlight would recede — a development that no doubt would be welcomed by mainstream Republicans, now being unwittingly drawn into the daffy narrative.

"With midterm elections coming up, and Obama losing some momentum, this would be a perfect opportunity for the Republicans to move to the middle, or [for the GOP to] rebrand itself as the party of competence," Fenster says.

"To the extent they become obsessed with marginal, complicated issues like birth certificates, it will be more difficult for them to run strong — especially in 2012," he says.

But Posey this week said he has no intention of withdrawing his birth certificate bill — "why would he?" his spokesman said. When asked to comment on the purpose of his legislation, Posey responded with the following statement:

"There have been questions raised in the past about candidates meeting the Constitutional requirements for the Office of President. My bill simply requires that future candidates for president file with the Federal Elections Commission the necessary documentation that shows a candidate has met the three requirements for the Office of President. It simply implements the Constitution through legislation where there are no current standards in law."

Republicans are bracing for birther confrontations back home, and liberal Democrats have been making the most of the situation.

A Huffington Post writer with a microphone and camera chased House members around the Capitol Monday, demanding to know whether they believed Obama is a natural-born citizen.

The House voted unanimously Monday night to approve a resolution that not only celebrated the 50th anniversary of Hawaii's statehood but also included this no-nonsense clause: "Whereas the 44th President of the United States, Barack Obama, was born in Hawaii on August 4, 1961." Posey voted in favor of the resolution.

Questions about the birthers arose during White House spokesman Robert Gibbs' meeting with the press Monday.

"I almost hate to indulge in such an august setting as the White House," Gibbs said, "the made-up, fictional nonsense" of whether or not the president was born in this country.

It's been proven "ad nauseam," he said, that the president is a natural-born citizen. Gibbs noted that for $15, anyone can set up an Internet address and "say whatever you want."

The White House has been pretty savvy, Fenster says, by standing back and suggesting that they're the "sane adults in the room, while the Republicans are out there looking for birth certificates."