Accessibility links
Beachcombing For Bodies In Loomis' Provincetown Author Jon Loomis says Provincetown, Mass., is the perfect setting for his series of crime novels; the funky beach town is so crazy in the summer that it's impossible to create a character who is over the top. 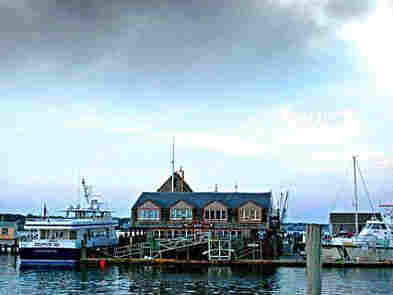 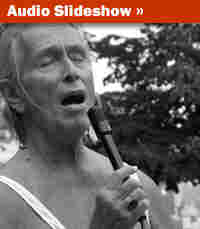 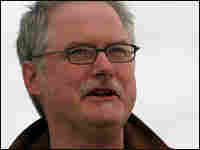 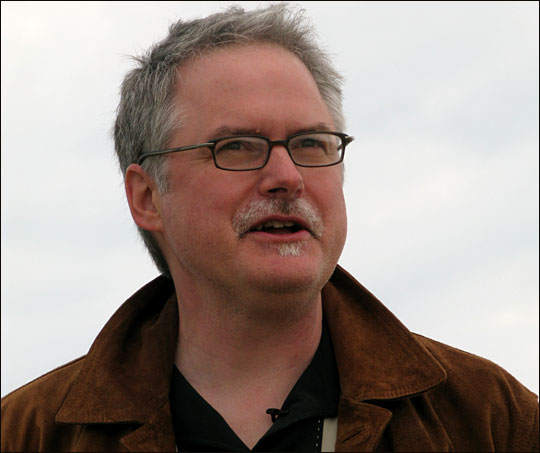 Author Jon Loomis says that Provincetown's collection of quirky locals and tourists makes it the perfect setting for his novels, Mating Season and High Season. 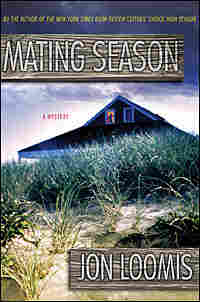 Detective Frank Coffin stood in the sun-streaked living room that had, until sometime the day before, belonged to Kenji Sole. It was a very nice living room indeed: spacious and airy, furnished in an eclectic mix of antiques and Eames-era modern, with several excellent abstract paintings hung on the white walls. Coffin recognized a door-sized Rothko in violet and umber, and what might have been an early de Kooning in black and white. Tall windows ran along the living room's south side overlooking Provincetown Harbor, which sparked in the bright morning sunlight. A massive stone fireplace dominated the opposite wall. The floor, made of wide oak planks, was mostly covered by an enormous Persian rug, patterned in watery blues and greens, which would have been quite beautiful if Kenji Sole's dead body had not been lying on it in the middle of a large and complicated bloodstain.

"Looks like a stabbing," said the policeman standing next to Coffin. His big belly strained against his uniform shirt. He was Coffin's cousin Tony Santos.

Coffin looked at him, then back at the eight-inch chef's knife protruding from Kenji Sole's chest. "You think?" he said.

Sergeant Lola Winters tapped Tony on the shoulder. "Maybe you'd better go outside and keep a lid on traffic," she said.

"I don't see any traffic," Tony said, looking out the north window at the steep, narrow road leading up to Mayflower Heights from Route 6A.

"Then it'll be easy," Coffin said.

Coffin held up a finger. "Crime scene. No cigarette butts."

"Right, no worries," Tony said, trotting down the open staircase.

Coffin rubbed his temples. He felt dizzy; a high-pitched whine sang faintly in his left ear. Kenji Sole had been a beautiful young woman. Asian or part Asian, she had almond-shaped eyes, an oval face, a strong nose that hinted at some European genetics. She had long, shag-cut hair dyed honey blond. It was hard to say how old she was: early thirties, maybe. Slender and small-breasted, she'd kept her pubic hair trimmed to a neat, dark strip. She was nude except for a sheer baby-doll nightgown and an ankle bracelet made of tiny shells, which glowed pale in the sunlight against her skin. Coffin looked away, feeling queasy, then looked again. She had been stabbed at least five times and was covered in drying blood.

Coffin sat on the back steps. He felt better; the buzzing sound in his head had subsided, and his peripheral vision seemed almost normal. Lola fanned him slowly with her uniform hat.

"I'm okay now," Coffin said. "You can stop with the fanning."

A car passed below them on 6A, heading toward Provincetown. A pair of grackles waddled across the narrow lawn.

"I'm fine," Coffin said. "Let's check out the rest of the house. Then we'll go talk to the cleaning ladies."

The house was a big seventies modern, two stories, newly remodeled. There was a detached three-car garage with an upstairs carriage house.

The kitchen was well designed and almost pathologically neat. Sparkling crystal wine goblets hung, globes down, from an overhead rack; the six-burner Wolf range was spotless, as though it had never been used. There were gleaming black granite countertops and cherry cabinets so perfectly finished they seemed to glow from within. A sliding glass door opened onto a broad deck that faced southeast, toward Truro. The built-in stainless steel refrigerator was big enough to hang a body in. The thought gave Coffin a quick shiver. He resisted the urge to open the refrigerator door. There was an antique ship's clock on the wall. Coffin glanced at his watch: The clock was nine minutes fast.

"Shun," Lola said. "Japanese. The fancy set." She pointed to an empty slot in the block. "Our killer found his weapon here, instead of bringing his own."

Lola cocked an eyebrow. "What is this, a quiz?"

"You could plan to kill someone and still improvise the weapon," Lola said. "You go to their house intending to strangle them and then decide you like the look of the chain saw out in the garage, or the fireplace poker."

The kitchen's southeast wall was made almost entirely of glass. Coffin stood for a moment looking at the small waves slopping into the curve of lion-colored beach, out past the treetops and the North Truro tourist motels. "I wonder what's upstairs," Coffin said.

"Holy crap," Lola said, standing next to Coffin in the master bedroom.

"It's like a bomb went off. I wonder what they were looking for." Clothes and jewelry lay scattered everywhere. Most of the books had been pulled from the floor-to-ceiling shelves. The closet had been turned inside out, the mattress slashed, the dresser drawers dumped on the floor. Two small paintings had been torn from the wall and flung across the room. One lay facedown; the other was a black-and-white abstract that might have been a portrait of a nude woman. One print still hung on the wall: a dune-and sunset picture with an idealized lighthouse in the middle distance.

It seemed oddly out of place among all the abstract-expressionist and color-field pieces — some of which, Coffin thought, were probably worth a lot of money.

He opened the door to the bathroom. The walls and floor were green marble. The shower and the Jacuzzi were enormous and outfitted with gold fixtures. "Jesus," Coffin said, his voice echoing softly off the marble walls. "You could throw a party in here. It's bigger than my living room."

There were three smaller bedrooms and two additional baths. All were as neat as the kitchen, thoroughly dusted, tucked, and straightened — tasteful and impersonal.

The study had been tossed as thoroughly as the master bedroom. The drawers of the carved antique desk had been yanked out and dumped onto the floor. Pens, pencils, legal pads, CDs, paper clips, and Post-it Notes were everywhere. The Aeron chair lay on its side. There was a printer on a wooden stand, and a computer keyboard had been flung into the corner.

"I hope this isn't going to be about technology," Coffin said. "I hate technology."

"I'm guessing it's about sex," Lola said. She scratched her belly. She had a long scar that ran from below her right breast to her left hipbone; sometimes it itched. "They only searched her personal space. Not the guest rooms, not the kitchen or the living room. Weird."

"Like they knew where to look," Coffin said. "Or got scared off. Or found whatever it was and left."

The bedrooms all opened onto a wraparound deck, suspended over a steep bluff that dropped sixty feet straight down to the edge of the old highway. The trees below had been trimmed so that the view of the harbor and Cape Cod Bay were unobstructed. Coffin stood on the deck for a long moment and watched a red sailboat noodling around on the water. The sun glinted; the sailboat fluoresced. Coffin wanted a cigarette, but his girlfriend, Jamie, had thrown away his last pack and ordered him to quit again.

"I wonder what's keeping Mancini and the boys?" Lola said, standing in the sliding glass door. Mancini was the Cape and Islands district attorney; he and his team of state police detectives were on their way from Barnstable, driving up Route 6 in Mancini's big Lexus.

Coffin looked at his watch. It was almost 8:45. "They'll be here any minute," he said. "We'd better have a talk with the cleaning ladies."

In the past few years there had been an enormous influx of Eastern Europeans — mostly girls in their late teens and early twenties — into Provincetown's summer labor force. They came with student visas and worked mostly illegally, waiting tables or cleaning toilets or running cash registers at the A&P. No job was too menial, no living conditions too squalid. Coffin had ridden along on more than one nuisance call to the older North Truro motels that now served as cheap living spaces for seasonal workers and found as many as twelve Eastern Europeans living in a room, sleeping in shifts, three to a bed. They came from poor countries, mostly: Serbia, Bulgaria, Croatia. They needed money to pay for school, and the rest they sent back home to their families, at least until they got caught up in the American consumer frenzy and decided to keep it for themselves. Some of them, unsurprisingly, fell into drug use or prostitution, though there wasn't much demand for female prostitutes in Provincetown.

Kenji Sole's cleaning ladies were young Eastern European women who worked for a service called Maid to Order. Their car, a ten-year-old Honda Civic with a trunk full of vacuums and cleaning supplies, was parked in the drive between the house and the garage. Both girls were very pretty: a tanned, big-breasted blonde named Minka and a slim brunette named Zelenka. They were sitting on the steps to the carriage house and smoking. Coffin didn't bother checking their IDs.

"So you got here at what time?" Coffin asked them.

"A little after eight," Minka said, her hand shaking as she took a drag from her cigarette. "We went in kitchen door and right away start to work. Zelenka saw her first."

"The door was unlocked?" Lola said.

Minka shrugged. "Is P'town," she said. "Who locks their door?"

The brunette, Zelenka, nodded. "It was normal," she said. Her eyes were bright blue and almond-shaped, her hair cut short. "She always leaves money on the counter — cash, two hundred dollars. Sometimes she comes downstairs for coffee, but mostly we don't see her."

Coffin nodded. Their accents made his heart leap in his chest. "If you didn't see her, where would she be? Out?"

Minka shrugged. "I don't know. Out, sure. Not in the house, or we would see her."

"Is big house," Minka said. "We clean everything."

"Yes." Zelenka's hair bobbed a little when she nodded her head. "I am going into living room to vacuum, and she is there. So much blood! I feel very frightened when I see her."

"Did you touch her? Or touch anything in the living room?"

Zelenka shook her head vigorously. "No. I don't touch nothing."

"She screams very loud," Minka said. " 'What is going on?' I say. She runs outside, screaming, screaming. So I am afraid. I go outside, too. She says Miss Kenji is dead."

"You knew she was dead?" Coffin asked.

"Yes," Zelenka said, taking a last hit from her cigarette, then lighting a new one from the butt. "I see dead people before, in my country. Many times. She is dead."

"Minka calls our boss on her cell phone. Boss calls police." She pointed to the carriage house. "Also, the man who lives there comes outside to help us. He is nice man, I think."

"He checks in house, to make sure is safe."

"He makes sure whoever stabs Miss Kenji is gone," Zelenka said. "He is very brave."

"How long was he in there?" Coffin said.