Accessibility links
Tijuana Bicyclists Ride To Make Streets Safe Every Wednesday night, the streets in Tijuana, Mexico, are filled with hundreds of bicyclists who ride in spite of the city's notorious violence. They want to show that the streets can be safe and that Tijuana is a family-friendly place.

The streets of Tijuana, Mexico, can be deadly. Last year, more than 800 people died there — many at the hands of drug traffickers. But there's another side to life in Tijuana. 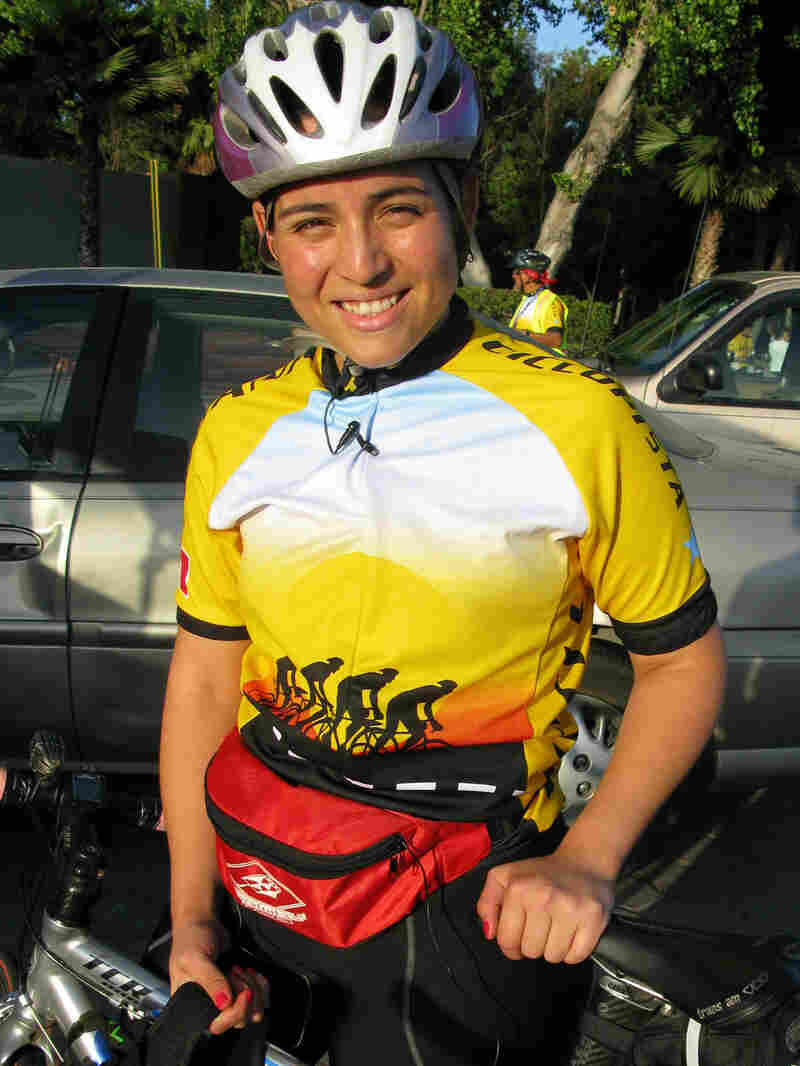 Saida Perez, 27, recently moved across the border to San Diego, but she still comes back every week for the ride. Carrie Kahn/NPR hide caption 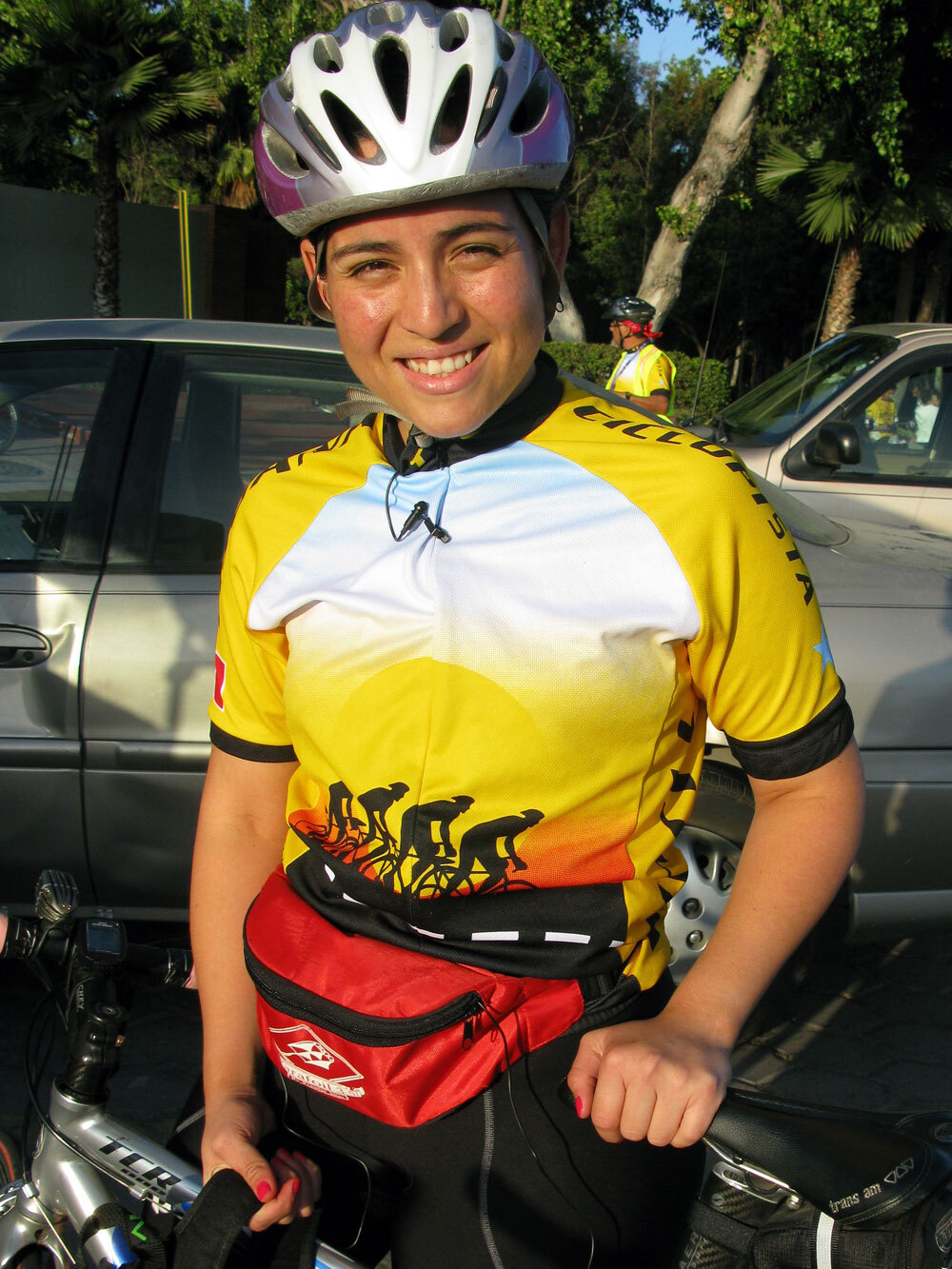 Saida Perez, 27, recently moved across the border to San Diego, but she still comes back every week for the ride. 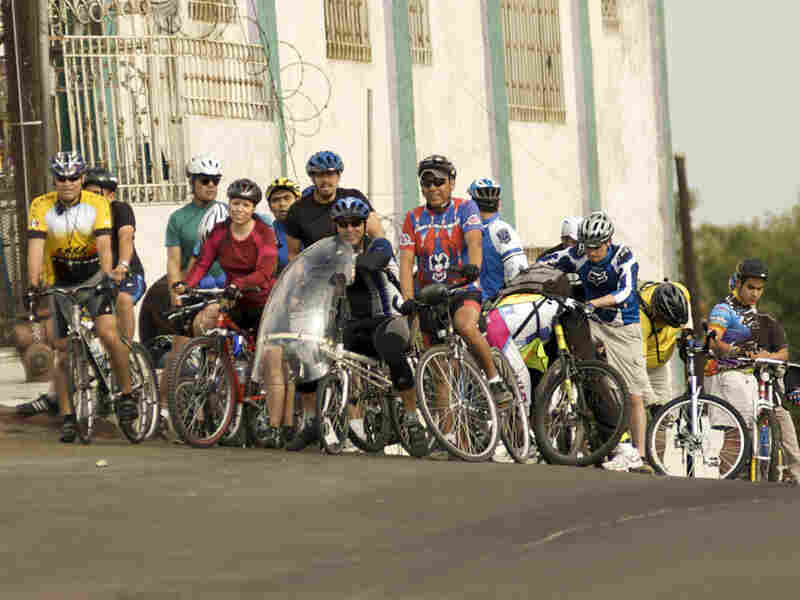 Every Wednesday, hundreds of bicyclists participate in "Tijuana Cicloton" — an effort by residents to reclaim their city's dangerous streets. Arturo Viazcan hide caption 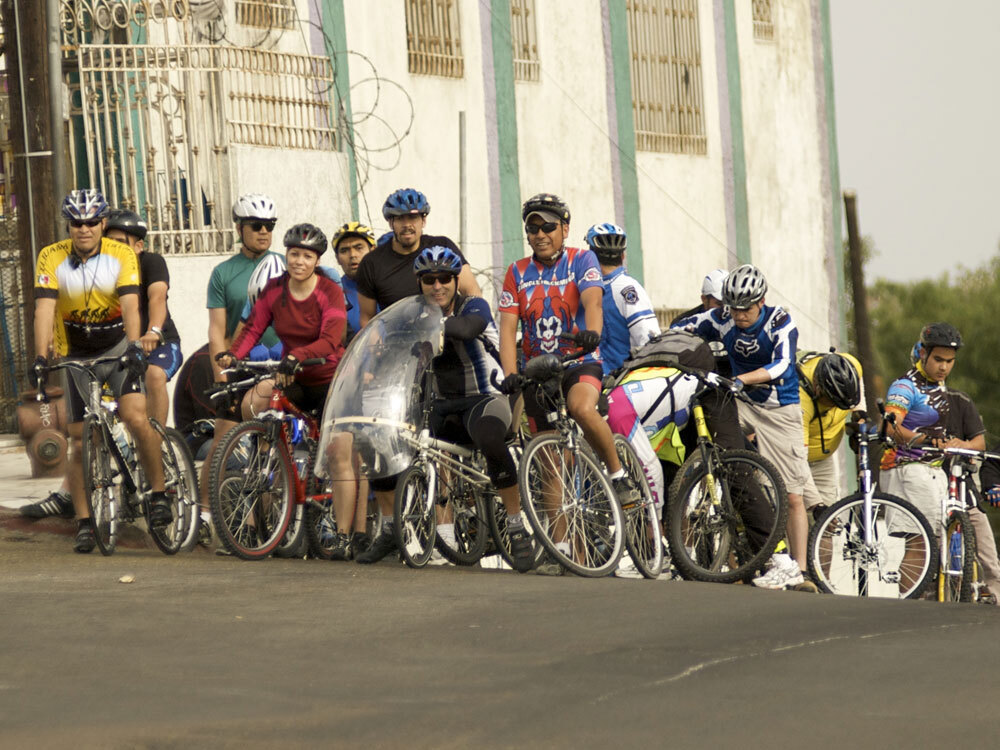 Every Wednesday, hundreds of bicyclists participate in "Tijuana Cicloton" — an effort by residents to reclaim their city's dangerous streets.

Every Wednesday, hundreds of bicyclists, some decked out in custom bike clothes and others in just jeans and T-shirts, gather in front of the Tijuana City Hall.

I've spent a lot of time in Mexico, and this is not like any other event I've ever seen. Not only does it start exactly on time, the organizers are sticklers for safety and follow every rule of the road.

They have monitors all along the route. They stop at every red light, and everyone has to wear a helmet.

I pull up alongside 27-year-old Saida Perez and start riding with her. She recently moved across the border to San Diego, where she's a laboratory biologist. But she still comes back every Wednesday night for the ride.

"It's not that big of a workout, but it's a fun thing to do," she explains.

It's a 14-mile ride. Perez says it takes more than two hours because of all the traffic, and all the stopping and battling with cars.

"There is no culture here about cycling, and it's very important that we learn about it," she says.

It's rare to see a cyclist brave the streets of Tijuana. They have to contend with giant potholes and lots of skinny, mean dogs — not to mention clouds of thick black truck exhaust.

But the biggest road hazard may be the random array of those circular yellow street reflectors that just seem to sprout out of the asphalt.

Perez says they call them bolitas matadoras, or "little killer balls," because they make you fall off your bike.

But in a violent city like Tijuana, hitting a few bumps is not the biggest worry. Perez says she tries not to think about the hundreds of drug killings here. She grew up in Tijuana, and you can tell she loves her city as she points out some personal landmarks.

"I went to school here for high school. I'm very proud of this place. It used to be a recreational center in the '20s. All the gangsters would come here. There was a casino and a very elegant and fancy hotel and salon," she explains.

Up the hill is one of her favorite parts of the ride — the giant bakery.

"When we go through here it smells like cookies. It just smells so good. And when we are coming back, it smells even better because we just want to go eat something," she says.

We also pass the General Hospital where armed drug traffickers once brazenly burst into the emergency room and grabbed an injured colleague. And you can see the gates of the state prison where a riot broke out and dozens of inmates were killed.

As we peddle down an eight-lane highway, a heavily armed federal police convoy rolls by. The men are standing in the back of three pickup trucks. Perez looks tense. She says it's scary to see them around because they have guns and seem ready to shoot. Most of the officers' faces are covered by thick black ski masks.

The light turns green and they're off — and so are the cyclists.

When asked if he's more afraid of the narcos or the cars, Cesar Zuniga, a local dentist, says he's afraid of both. But he says neither will stop him from coming out for the Wednesday night rides.

"This is very peaceful," he says.

It's even more peaceful, the doctor says, when he cranks up his iPod.

The night's tally is taken just past the halfway mark — 375 bikers tonight. The record is 429. The traffic has lightened, and it's starting to get dark. There aren't a lot of street lights along the route, but there are still plenty of people out on the streets. A woman cheers as the bikers pass.

The pace picks up now. Riders pass a flame-throwing juggler and a drummer panhandling at a corner.

Soon, the ride ends back at City Hall. One of the riders congratulates me on making it, and I ask him if now we go eat tacos.

Tijuana may not have bike paths yet, but it does have some of the best tacos in the world.