Accessibility links
'Clunkers' Pile Up On Auto Dealer's 'Death Row' The federal government requires auto dealers to disable a vehicle's engine in order to get a refund from the "cash for clunkers" program. Critics say the engine is the most valuable part of a junked car so destroying them is wasteful. 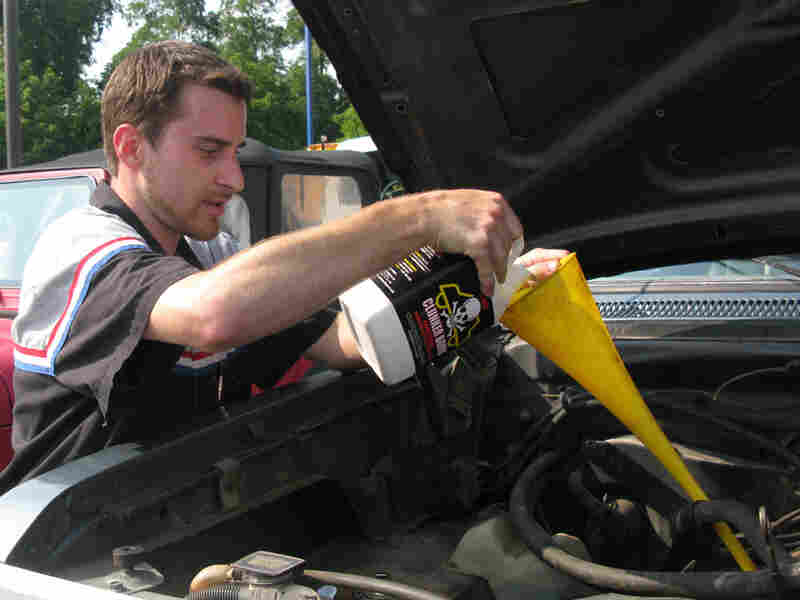 Mechanic Danny Smith "kills" a 1987 Dodge Ram pickup at Criswell Chevrolet in Gaithersburg, Md., by pouring a solution made of sodium silicate into the oil tank. Elizabeth Shogren/NPR hide caption 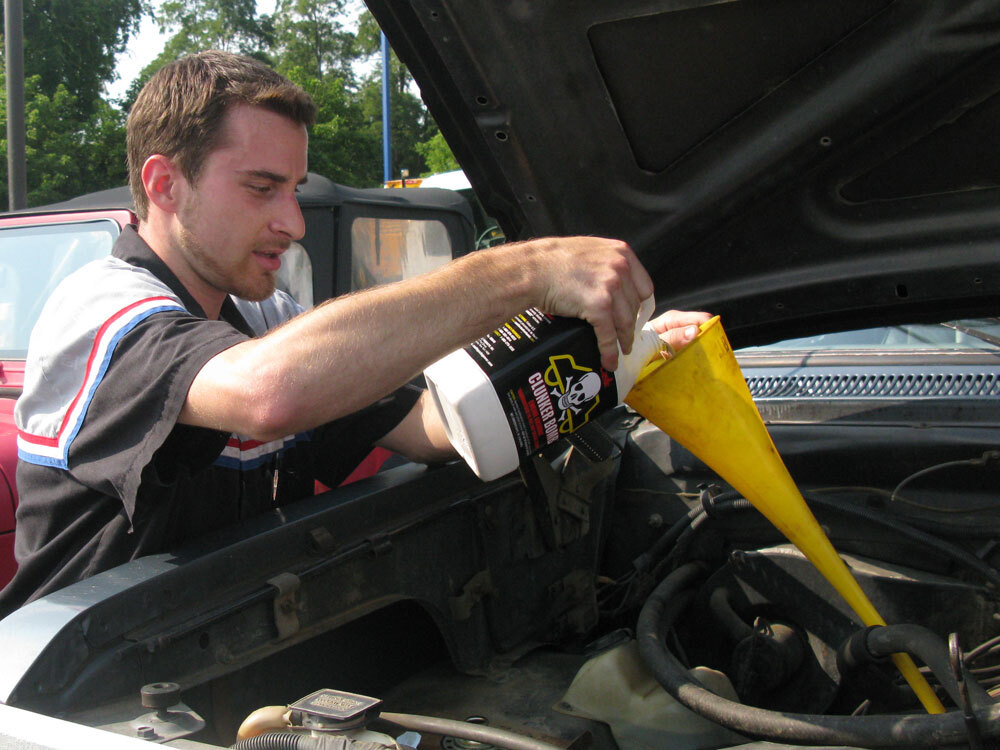 Mechanic Danny Smith "kills" a 1987 Dodge Ram pickup at Criswell Chevrolet in Gaithersburg, Md., by pouring a solution made of sodium silicate into the oil tank.

So far, Americans have swapped more than 150,000 gas guzzlers for more efficient vehicles under the "cash for clunkers" program, and Senate Majority Leader Harry Reid says he expects the Senate to vote this week to add $2 billion to keep the program going until Labor Day.

The federal government requires auto dealers to disable the engines on the clunkers before they junk the cars. According to Danny Smith, a mechanic at Criswell Chevrolet in Gaithersburg, Md., they do that by pouring two quarts of sodium silicate into the oil tank and then running the engine at 2,000 revolutions per minute until the engine locks up and won't start anymore.

Initially, the government refused to give refunds until dealers proved they had disabled the cars, so dealers were rushing to kill their clunkers. When it looked like the program was running out of money, dealers panicked.

"If something were to happen in that deal and you didn't get the government money — you've got a disabled vehicle that's worth less than the worthlessness it was when it came in," says Neil Kopit, Criswell's director of marketing.

On Friday, the government changed the rules to give dealers seven days after they receive refunds to disable the cars.

'Cash For Clunkers': A Closer Look

At Criswell's four dealerships, there are more than 100 old vans, pickups and sedans on what the mechanics and salesmen have started calling "death row."

"[We've become] the morticians of the automobile world," Kopit says.

It's not what his dealerships want to be doing with cars.

"We sell them for a living," he says. "It's like shooting a horse; you don't feel good about it, but sometimes that's what's got to be done."

Kopit may feel bad, but not nearly as bad as Bill Miller, who owns four auto-recycling and parts businesses in Maryland.

Standing in a sea of junked cars, he opens the hood of a 2000 Dodge Caravan. It's marked to show that it's already been disabled.

"This is an engine that's had the solution run through it," he says. "It just shows that that's a perfectly good engine that they ruined."

Miller says the program seems wasteful. "I think we're bribing people to buy new cars," he says. "I think we ought to bribe them to buy used parts."

Miller's angry, and so is the entire auto-recycling industry, because the engine is the most valuable part of most junked cars.

Miller pays $100 to $300 per clunker. He hopes to sell the transmission, headlights, doors and other body parts, and send the tires away to be recycled. After the clunkers are stripped, they're crushed and sold to a scrap processor.

Some recyclers have refused to participate in the clunkers program because they don't think they can make a profit. Miller thinks he can get at least a few hundred dollars from each car and will be heading out to pick up some more.