Accessibility links
The Shaky Economics Of 'Cash For Clunkers' A government program enticing people to trade in old cars for new ones has proved wildly popular, except with economists. They say the benefits of "cash for clunkers" may not outweigh the costs, in terms of finances or the environment. 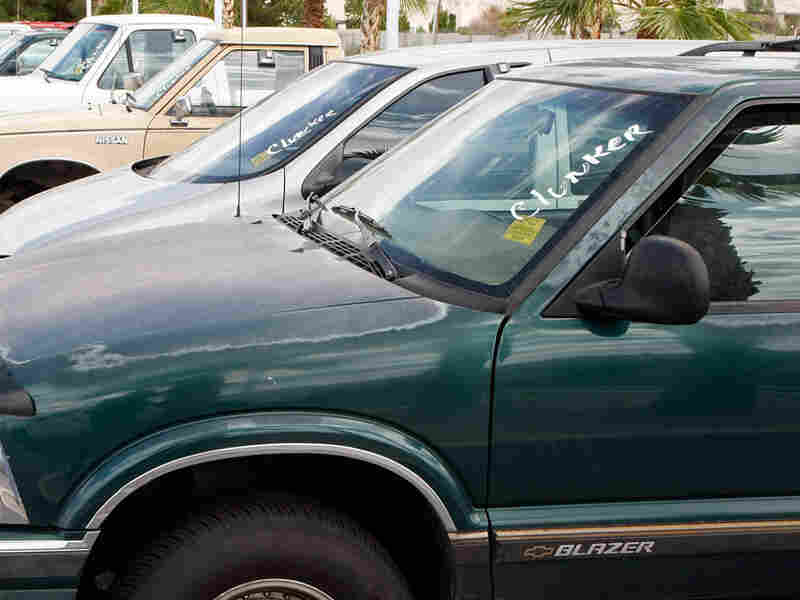 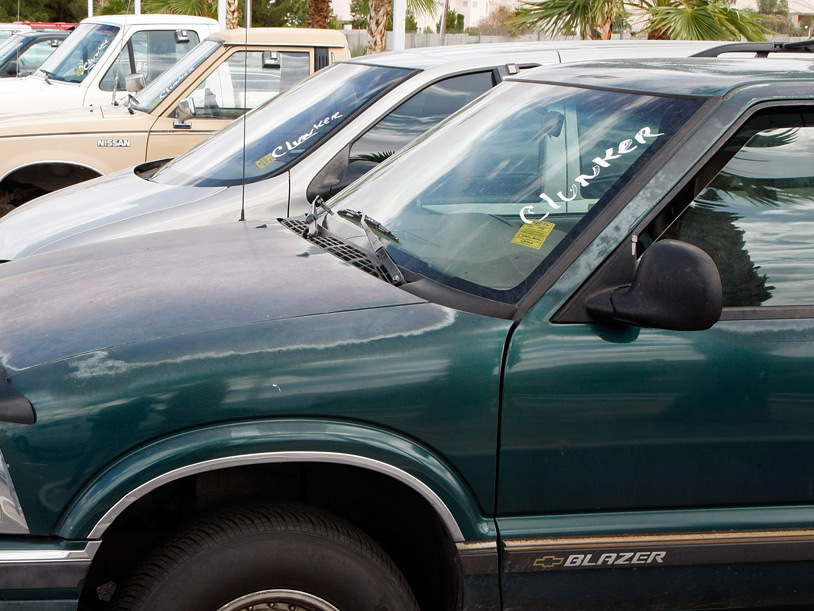 Economists question the value of encouraging drivers to junk cars that run and buy new ones.

Congress seems poised to extend the wildly popular "cash for clunkers" program, tripling the size of its initial $1 billion budget. But ask some economists about the program, and they shake their heads.

Allen Sanderson, an economist at the University of Chicago, says it's important to remember what's behind many auto dealers' crowded showrooms. Out back, he says, you'll likely find a parking lot filled with the cars that have been traded in. Many of those vehicles run fine. And they all are scheduled for execution.

The government trade-in program requires that the engines of the clunkers be killed. More accustomed to fixing cars, mechanics will pour in a solvent called "liquid glass," then run the engine until it seizes.

Meet the Langdons and their new car. . .

From an economic perspective, that's a waste, says Sanderson, who calls the program "silly." The autos required labor and resources to build. Consider a similar program to replace old light bulbs with more efficient ones, he says. Would you smash the old bulbs?

Sanderson admits that there is some environmental benefit to the clunkers program. "The question is at what cost," he says. "For $3 billion, could we do something better for the environment than what we're doing? I think absolutely. It's a very inefficient expenditure."

What about the argument that "cash for clunkers" provides a boost for the auto industry? Rep. Edward Markey (D-MA) recently called the program "electroshock therapy for the economy." Rep. John Campbell (R-CA) declared, "Plants will open up, they will be producing more cars, and people will go back to work."

'Cash For Clunkers': A Closer Look

Jeremy Anwyl, the CEO of the car research site Edmunds.com, isn't so sure. Anwyl says that even without the program, people trade in about 60,000 clunkers a month. While "cash for clunkers" has encouraged more people to trade in their vehicles, Anwyl argues that most of them would have come in sooner or later anyway.

"It encouraged anyone that had a clunker that would have traded in their vehicle over a three- or four-month period to do so over three or four days," he says. "So, at the end of this you have to wonder how many additional sales were actually created."

Anwyl says he feels bad about criticizing the program. "Hey, I'm as happy as anybody to see car sales go up," he says. After looking at the data, he calls it "one of the more over-hyped programs in an era of over-hyping programs."

The U.S. is not the only country trying out the "cash for clunkers" idea. Germany has a much larger program, at $7 billion.

Stefan Schneider, chief international economist at Deutsche Bank Research in Germany, supports his country's effort. He argues that encouraging people to trade in cars now instead of later makes sense, because the economy needs a boost to get it going again. Schneider sees evidence that the $7 billion the government is spending on incentives has boosted spending.

"In the first quarter, private consumption picked up a bit," he says. "If you look at other indicators, retail sales, it's pretty evident that's mainly coming from the car program."

Schneider says there is concern that when the program ends, the bump in car sales will turn into a dip of about the same size. But the hope is that the economy will have recovered a bit, and the fall won't be so painful.

In the grand scheme of the global economy, the American and German programs combined don't count for much. James Galbraith, an economist at the University of Texas, says he's surprised the American "cash for clunkers" initiative has generated so much controversy. It's hard to devise a perfect program he says, and this one is merely "inoffensively inefficient."