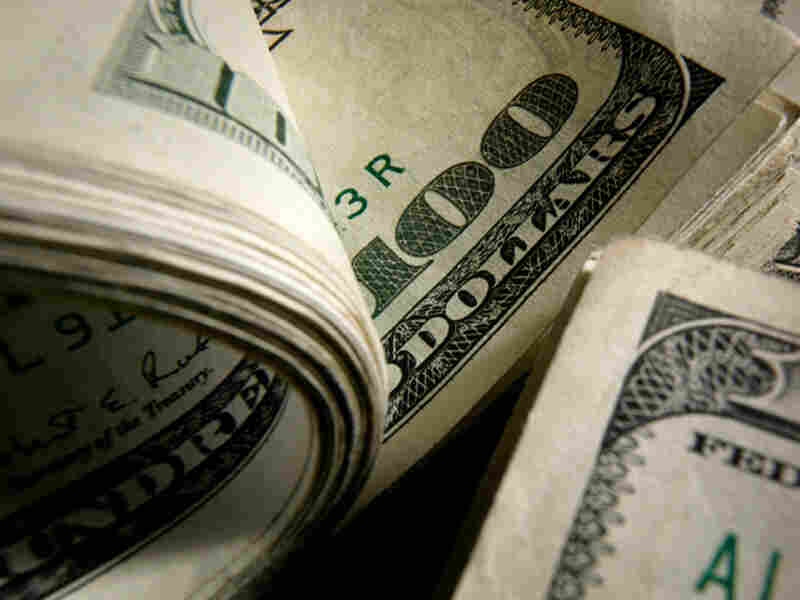 People in an experiment reported feeling stronger for up to 10 minutes after handling money. hide caption

People in an experiment reported feeling stronger for up to 10 minutes after handling money.

If you've ever thought of money as a drug, you may be more right than you know. New research shows that counting money — just handling the bills — can make things less painful.

"It is surprising," says Kathleen Vohs, a professor of marketing at the University of Minnesota's Carlson School of Management who participated in the research. "It still surprises me."

The experiments were conducted by a colleague of Vohs' in China. Students came into the lab and were told they would be participating in a test of finger dexterity. One group was given a pile of Chinese currency to count. Another group was given blank pieces of paper to count.

Why The Unemployment Rate Fell

Economists say it's no mystery.

Then, some of the students were asked to put their fingers in bowls of water heated to 122 degrees Fahrenheit and rate how uncomfortable it felt.

"The subjects who had earlier been counting money and had their hands in the painfully hot water reported that the water didn't feel so hot to them, compared to people who had counted slips of paper," Vohs says.

How hot is 122 degrees Fahrenheit? Not hot enough to do lasting damage, but hotter than the Consumer Product Safety Commission recommends setting your home water heater. I heated some water in the microwave and used a thermometer to make sure I'd hit the mark — I can testify that 122 degrees is uncomfortable. "Like a hot hot tub?" Vohs asked during our interview. Yes. "Good, OK," she said, then confessed, "Boy, you know I never did that."

Money As A Substitute For Love

The experiment and related ones are described in a research paper titled The Symbolic Power of Money, published in the journal Psychological Science. Combined with earlier work, it maps out a curious connection. As far as your brain's concerned, money can act as a substitute for social acceptance, reducing social discomfort and, by extension, physical discomfort and even pain.

Researcher Xinyue Zhou, of the department of psychology at Sun Yat-Sen University in China, puts it in very human terms. "We think money works as a substitute for another pain buffer — love."

Past research has shown that a social relationship can make things hurt less. "If you dip your hand in hot water, if someone is standing there beside you, then you feel less pain," Zhou says. "That was a classic experiment."

Money as a substitute for social acceptance and love? Zhou laughs and admits that it's kind of sad. "All substitutes are sad."

Vohs found the results of the money-handling experiment especially surprising because the effects last so long. Sometimes a full 10 minutes had elapsed between the time students handled the money and the instant they put their fingers in the water.

The researchers had them fill out surveys as they waited. The responses offered some clues as to what was going on in the brain. The students were asked a litany of questions: Did they feel happier after counting the money, or sadder? What stood out, Vohs says, was a feeling of strength. "When subjects had been reminded of money, 10 minutes later they said inexplicably they just felt stronger," Vohs says.

The Power Of 'Priming'

The experiment could prove groundbreaking. "It's a substantial finding," says Nicholas Epley, a professor of behavioral science at the University of Chicago's Booth School of Business. The research "has the potential to be something of a discovery, which we don't always have all that often in psychology."

Epley says the long-lasting connection between being reminded of money and feeling less pain appears to be an elaborate example of something psychologists call priming, in which thinking about one thing can subconsciously trigger a related response.

Economists have studied money for ages — how prices, for instance, can efficiently direct the flow of resources. But meanwhile, in our brains, money has become a curious force, in this case behaving a bit like aspirin.