Accessibility links
New Yorkers Get Taste Of Big Gay Ice Cream Truck Even if you're not in the mood for a vanilla cone, you can't miss Doug Quint's ice cream truck. Quint's Big Gay Ice Cream Truck — which has that name emblazoned on the side along with a big, rainbow-colored soft-serve cone logo — has been turning heads all summer. 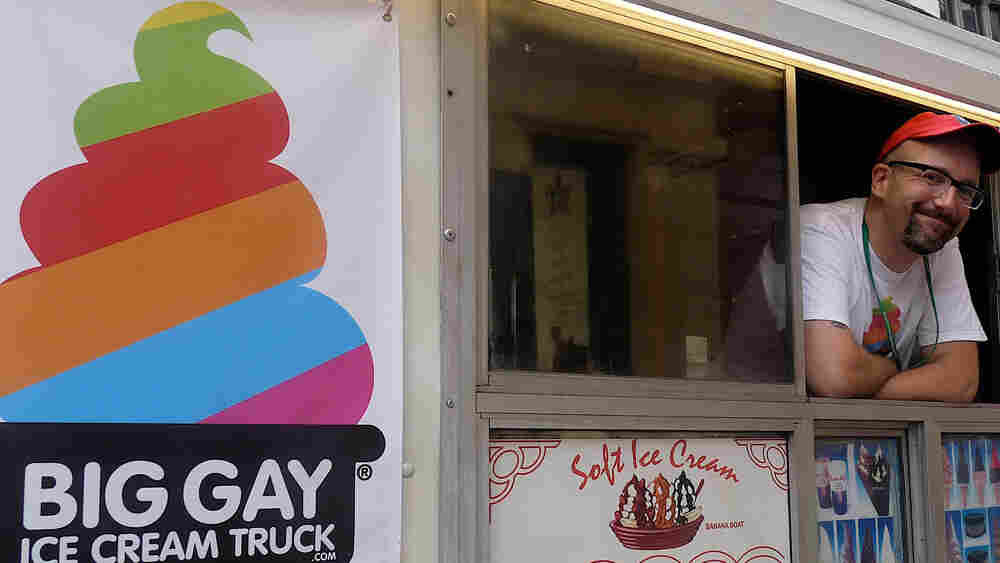 Even if you're not in the mood for a vanilla cone, you can't miss Doug Quint's ice cream truck on the streets of New York City.

Quint owns and operates the Big Gay Ice Cream Truck. And with that name emblazoned on the truck — along with a big, rainbow-colored soft-serve cone logo — Quint is bound to turn heads.

What exactly makes it the Big Gay Ice Cream Truck? Quint gets that question a lot.

Quint, who is a classically trained bassoonist, has only been in the ice cream business for a few months. The ice cream truck is just a summer gig while most orchestras are on break.

"It kind of came about because the idea of a middle-aged gay guy driving an ice cream truck seemed pretty humorous and a little bit suspect to me. I love the idea of what people might be saying, so I thought, 'Whatever they might be saying, let's grab it and amplify it times a hundred and label the truck that way,' " Quint says. "There's gonna be no doubt. It's the Big Gay Ice Cream Truck."

As for Quint's menu, he says it's sort of "metrosexual," with toppings like ground wasabi peas, caramelized bacon, Trix cereal and Nutella.

But if you're looking for something more traditional and more in line with the truck's name, you can always order rainbow sprinkles.