Accessibility links
Claudia Acuna: Newport Jazz Festival 2009 She grew up in Chile enamored with jazz, but not knowing what it was called. Now that she's a jazz singer in New York, she's embraced her native traditions more than ever. 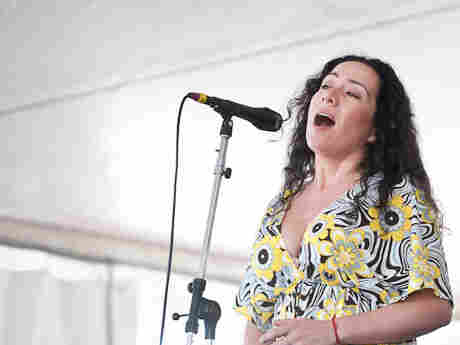 Claudia Acuna grew up in Chile a singer of many stripes, and was especially transfixed by the improvisation of musicians like Erroll Garner and Thelonious Monk. But it was only when an older couple told her that she had it in her to become a jazz singer that she discovered what this music was called — and soon after, packed up for the club scene in New York.

An early encounter with Dizzy Gillespie's Afro-Cuban music persuaded Acuna that she could find original common ground between the Latin music of her youth and the modern jazz idiom. She's been whittling away at that concept for well over a decade, singing more and more in her native Spanish as her career progresses. Her newest album, this year's En Este Momento, includes three songs by Chilean activist and poet Victor Jara, among other songs from across Central and South America. We're likely to hear much of her modern, pan-Latin jazz live from Newport's Marsalis Music stage on Saturday.