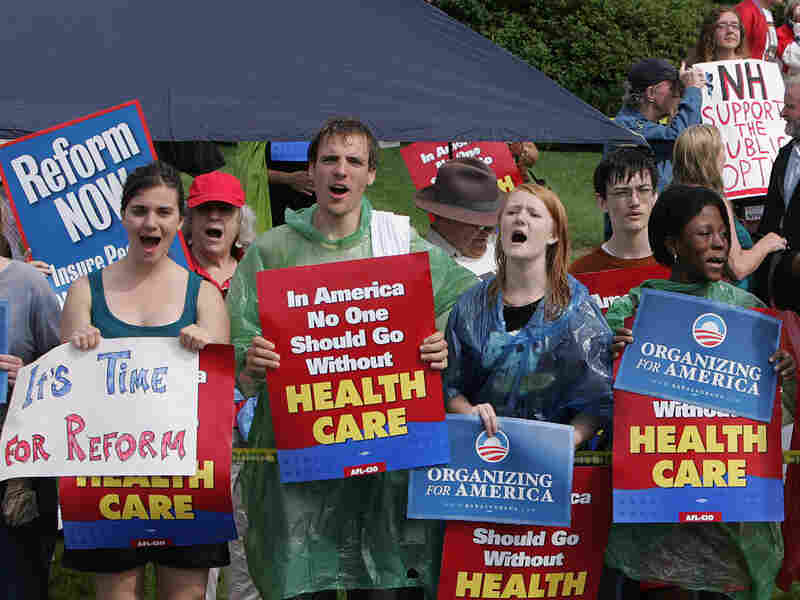 Supporters of President Obama chant Tuesday outside the high school in Portsmouth, N.H., where the president will speak about his health care plan. Jim Cole/AP hide caption 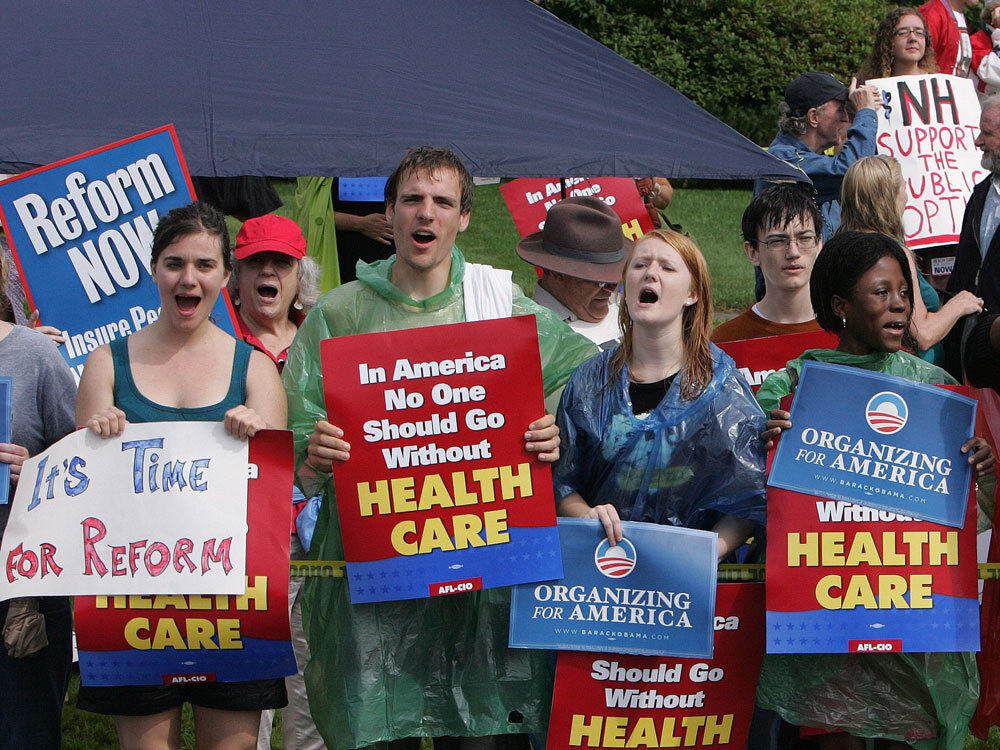 Supporters of President Obama chant Tuesday outside the high school in Portsmouth, N.H., where the president will speak about his health care plan.

Pressing ahead with efforts at a health care overhaul, President Obama told a town-hall style meeting in New Hampshire Tuesday that special interest groups are misrepresenting the facts to scare Americans and kill proposed legislation.

Saying claims that the overhaul would create "death panels" to ration health care to the elderly were "scare tactics," Obama urged the 1,800 participants at Portsmouth High School to support initiatives that would protect Americans from having their insurance coverage denied if they have a pre-existing condition or become seriously ill.

"Right now insurance companies are rationing care," he said. "They are basically telling you what's covered and what's not."

Obama also took aim at insurance companies, saying high fees are bankrupting families and companies while denying coverage to those who need it. He said 14,000 Americans lose their health insurance each day, and premiums are going up three times faster than wages.

Tying the rising health care costs to the economy in general, Obama said the cost of health care is continuing to rise and is adding to the national deficit.

"I need your help if you want a health care system that works for the American people as well as it does for the insurance companies," he told a crowd that frequently broke into cheers and applause.

Repeating the message he has delivered repeatedly over the last few weeks, Obama reassured Americans that they could keep their doctors and insurance plans, if they like them. But he said the overhaul would give them additional protections by keeping insurance companies from denying coverage for pre-existing conditions or dropping coverage for the seriously ill.

Obama said the plan would not cover all of the 46 million Americans who are uninsured. He said the plans being worked on my lawmakers would cover 36-37 million uninsured Americans.

Despite protests outside the school, the mood inside was upbeat. Although some of the participants disagreed with the plan, none expressed the anger that has made headlines at similar meetings held by administration officials.

Another major component of the plan is that it would cover routine checkups and preventative care — including mammograms and colonoscopies.

Demonstrators started to arrive early for the event, forcing police to call in reinforcements to help with security. City Attorney Robert Sullivan said about 1,000 people showed up, with supporters and opponents in almost equal proportions.

The local newspaper showed photographs of protesters holding signs — a typical one read "Sick of Obama" — as they lined up along the road Obama's motorcade took en route to the school.

"It was a colorful exercise in democracy," Sullivan said.

Barbara Taylor, 65, arrived at 7:30 a.m. and waited in the rain for the 1 p.m. event to begin. "I came because I'm scared to death," she said, holding a rain-soaked sign that read "Hands Off Our Health Care."

Inside, much of Obama's message was directed at seniors, who have been the targets of claims that the new system would cut Medicare and set up "death panels" to decide when care for the elderly was too expensive.

Obama promised his plan would not cut Medicare or "pull the plug on Grandma because we decided it's too expensive to let her live anymore." He said proposals for the overhaul authorize Medicare to pay for end-of-life counseling that includes information on living wills and hospice care.

He also reminded seniors opposed to a "government-run system" that Medicare is operated by the government — and he emphasized projections that Medicare will be operating in the red in eight to 10 years.

"If I was a senior citizen, the thing I'd be worried about right now is (if) Medicare starts running out of money because we haven't done anything to make sure that we're getting a good bang for our buck when it comes to health care," he told the crowd.

Republicans say the heated debate is a sign of widespread public dissatisfaction with Obama's ideas. But with some of the anxieties spilling into angry disruptions and even threats, Democrats have accused Republicans of orchestrating the events to sabotage legislation.

Obama also plans to address the public at meetings in Colorado and Montana in the coming days.