Accessibility links
Can U.S. Help End Rape As A Weapon In Congo's War? Secretary of State Hillary Clinton visited eastern Congo and denounced the use of rape as a weapon of war. She said the U.S. is offering Congo $17 million to combat sexual violence. But to address the problem, analysts say the U.S. must do more to improve Congo's army.

Can U.S. Help End Rape As A Weapon In Congo's War?

Can U.S. Help End Rape As A Weapon In Congo's War? 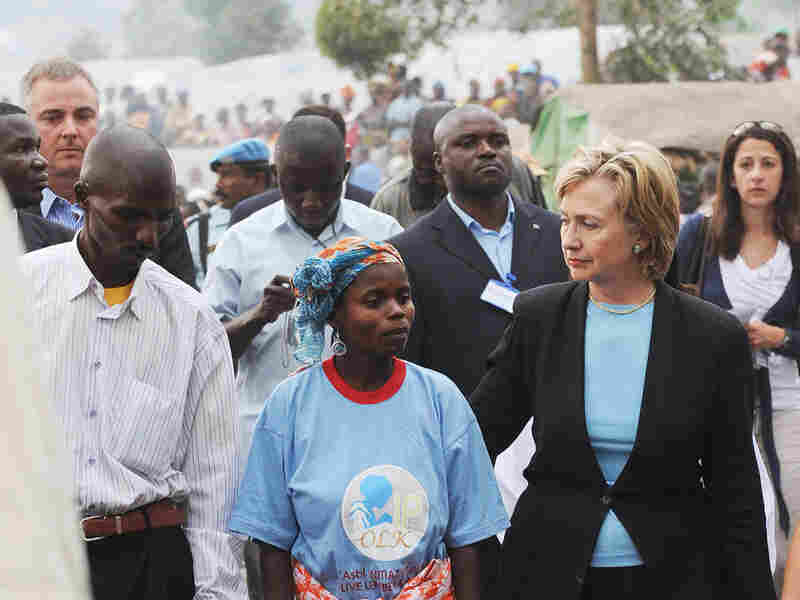 Secretary of State Hillary Clinton speaks to a refugee at a camp near Goma, in eastern Congo. Clinton denounced the used of sexual violence as a weapon in the region's ongoing war. Roberto Schmidt/AFP/Getty Images hide caption 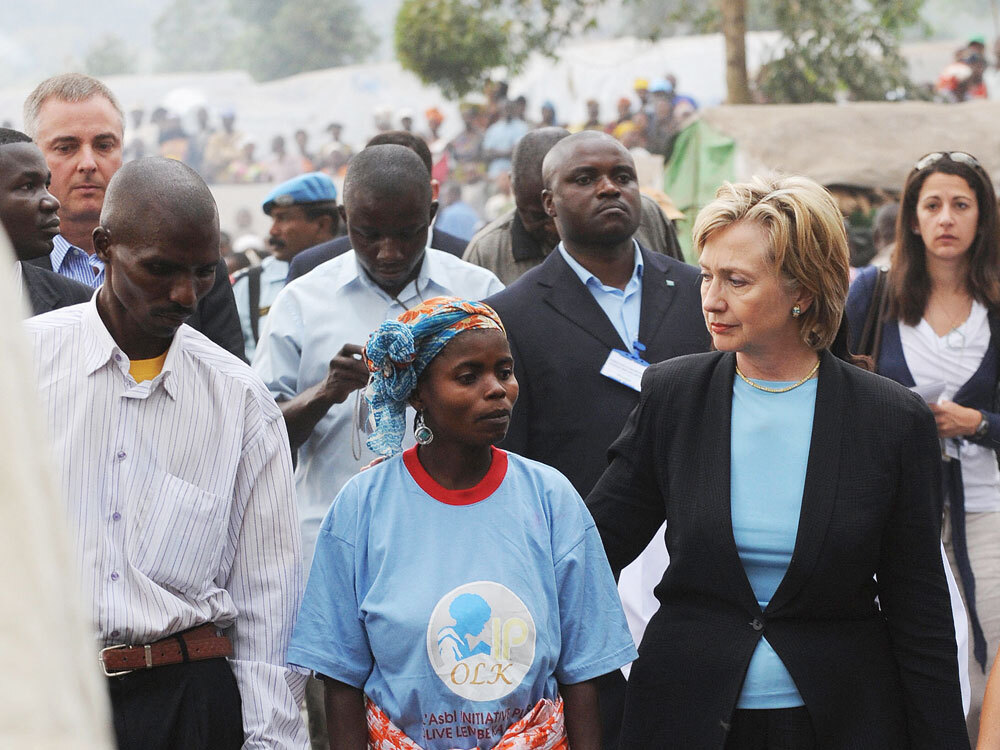 Secretary of State Hillary Clinton speaks to a refugee at a camp near Goma, in eastern Congo. Clinton denounced the used of sexual violence as a weapon in the region's ongoing war.

The systematic use of sexual violence as a weapon in eastern Congo is "one of mankind's greatest atrocities," Secretary of State Hillary Clinton said Tuesday in a visit to a Congolese refugee camp to draw world attention to the problem.

But analysts say the U.S. must do more than treat the symptoms of a deep-rooted conflict that has taken more than 5 million lives in the central African nation in the past 13 years.

They say the U.S. should help train and equip the Congolese army, an ill-paid and undisciplined force that has been among the armed groups accused of sexual violence.

Clinton met with Congolese President Joseph Kabila, then traveled to a vast camp outside the city of Goma, where about 18,000 displaced people have sought refuge from insurgents and other armed groups.

She said the United States is offering Congo $17 million to fight sexual violence, including about $10 million to train doctors to treat victims of sexual attacks.

The United Nations has recorded at least 200,000 cases of sexual violence against girls and women in the region since 1996.

Rape As A War Strategy

Colin Thomas-Jensen, a policy adviser to the Enough Project, which seeks to end violence in various parts of Africa, including Congo and Sudan, says he hopes Clinton's visit will draw world attention to the conflict — and the use of sexual violence as a weapon.

Thomas-Jensen says that rape in eastern Congo is more than just crime committed by individual soldiers, it is a policy ordered by commanders on all sides of the conflict. "It's ultimately a tool of control and subjugation, and it's effective," he says.

"In some instances, it's used as a means to forcibly displace communities. If you want to get people to move quickly, you impose a systematic campaign of rape against the women of the village," Thomas-Jensen says.

Jendayi Frazer, a former assistant secretary of state for African affairs during the Bush administration, says Kabila has been asking for years for U.S. training of his forces.

"The rebels are going to have to be confronted militarily and defeated by a well-trained Congolese force," Frazer adds. "The best thing you could do is train and professionalize that military."

The rebel group, the FDLR, is a militia formed of Rwandan Hutu tribesmen, some of whom were among the Hutu extremists who carried out the 1994 Rwandan genocide. They were briefly allied with Kabila and the Congolese government, but later refused to disband or to return to Rwanda.

"Ultimately, the problem in eastern Congo is that you have FDLR insurgents who will never come forward to a negotiated peace process," says Frazer, now a professor at Carnegie Mellon University.

In addition to sexual violence, Clinton addressed the trade in so-called "conflict minerals," such as tantalum, tungsten and tin, which are used in making components for electronic goods such as mobile phones.

Armed groups in the region are able to finance their activities by selling the minerals under their control, or by exacting payoffs for minerals that pass through their territory.

"The international community must start looking at steps we can take try to prevent the mineral wealth from the DRC ending up in the hands of those who fund the violence," Clinton said.

Clinton's visit to Goma, aboard a United Nations plane, was the first by a U.S. secretary of state to the city that has been at the center of the long-running war.

According to the Associated Press, some of Clinton's top aides opposed the stop in Goma, citing concerns for her safety in one of Africa's most volatile war zones.

"It shows what a high priority this is for her," Frazer says. "It's always very difficult to get clearance for a trip like this."