Accessibility links
Prewar Berlin Inspires Crime Novelist's Dark Side Set in the 1920s and 1930s — mostly in the section of the city that later became East Berlin — Philip Kerr's crime novels feature a climate of extreme violence and debauchery, full of rogues, cheats and liars. 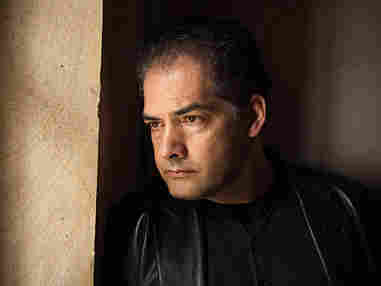 Philip Kerr is the author of more than 20 books, including, most recently, A Quiet Flame. His sixth novel featuring Bernie Gunther, If The Dead Rise Not, is due out in the U.S. next year. hide caption

Today, East Berlin's Alexanderplatz is a sprawling mass of concrete featuring acres of chain stores, neon signs, billboards advertising toothpaste and an endless stream of cars. Amidst it all, a big statue of Karl Marx casts a disappointed eye over what remains of his legacy.

It's hard to believe this drab expanse of East German architecture was once the physical and emotional heart of the city.

Kerr should know: his novels, set in the 1920s and 1930s, follow fictional detective Bernie Gunther as he works the homicide beat and witnesses the rise and fall of both the Weimar Republic and the Third Reich.

Gunther's city is a mix of extremes: People are flocking to fascism or communism. Berlin is trying to emerge from the shell-shock of defeat in the first World War, hyperinflation and later the stock market crash of 1929. It's also a city whiplashed by rapid modernization, where the attempted orderliness of Weimar republicanism runs smack into the excesses and debauchery of Berlin's dirty nightlife. 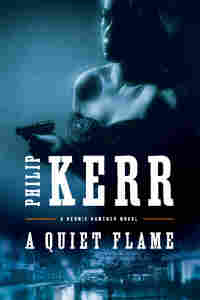 "Berlin in the 1920s was the most liberal city in Europe — I mean anything went," Kerr says with the raise of an eyebrow. "Sex, drugs, cabaret, open nudity — you name it. Whatever you wanted you could get here. And for gay men, I imagine, you must have thought you'd died and gone to heaven. There were flamboyantly gay clubs across the city."

Kerr and I take to what's left of Gunther's streets on foot. We head to Linienstrasse, which today is part of the gentrified, Mercedes-lined gallery district where people in carefully ruffled attire sip cappuccinos and try to look artfully bored. The white-walled sterility of the streets betrays nothing of what the area once was.

We arrive at an address that used to be home to the Blue Stocking, a notorious Weimar haunt where some of Berlin's estimated 100,000 prostitutes would accommodate just about any kink, perversion, or taste. The Blue Stocking was known for hookers called "gravel."

"Gravel were prostitutes who were disabled," Kerr explains. "They either had one leg, or they were disfigured in some way or had one arm or possibly no legs at all."

The buoyant market for gravel in the 1920s was a result of high numbers of men who had returned from the war without limbs, and felt more comfortable with prostitutes with similar disabilities. Today the infamous club address houses a physiotherapy studio.

A Survivalist With A Moral Code

In Kerr's novels, detective Gunther watches as the city he loves for its edgy openness slowly becomes oppressive and is taken over by jack-booted thugs. Gunther believes in democracy and the Weimar republic, yet he's not passionately political — he just a professional who wants to do his job. But when dead communists and Jews begin turning up on Berlin's streets, it becomes impossible for Gunther to ignore that it's the fascist Brown Shirts who are doing most of the throat cutting, shooting and strangling.

The fascination for me writing about crime in Berlin was the idea that there was this much bigger crime taking place in the background, a fantastically epochal moment in history which is just going on.

Next to what's left of the Berlin Wall, at an outdoor exhibit called "The Topography of Terror," Kerr and I take in the red-brick outlines of basement cells. It's all that's left of the Gestapo's main headquarters and prison, the place where anyone the Nazis hated — communists, Jews, political dissidents, gays, social democrats and Roma (Gypsies) — were interrogated, tortured and often killed.

"Really what terrifies me most is that nearly all of it was done by lawyers," says Kerr with a shudder. "These people were intelligent, urbane, articulate. They knew perfectly well what they were doing."

And if you survived Gestapo interrogation and weren't shipped off to a concentration camp, they took you into the garden at Gestapo headquarters here and shot you — usually at 11 a.m. sharp. It was said that people who lived in the area could set their clocks by the sound of the gunfire.

For his part, Gunther opposes the Nazis, but doesn't always stand up to them. He is, as Kerr puts it, a survivalist. But his moral code sometimes gets in the way. He works his beat with the shadow of terror always hovering over him.

Kerr says he deliberately chose to set his novels during Berlin's most tumultuous era because "it is certainly, for my money, the most important historical event of the millennium, certainly since the Reformation anyway. ... It's only 50, 60, 70 years [ago] — which is nothing in historical terms, nothing at all."

Kerr was trained as a lawyer but quickly gave up the profession his parents wanted him to pursue and followed his passion for writing. He has published more than 20 novels so far. His sixth novel featuring Bernie Gunther, If The Dead Rise Not, is due out in the US next year.

He says his work has stayed vibrant by staying away from the cookie-cutter formulas that often tarnish the mystery and crime genres.

"It's parochial stuff. How many murders can you have in Oxford, for Pete's sake?" asks Kerr. "The fascination for me writing about crime in Berlin was the idea that there was this much bigger crime taking place in the background, a fantastically epochal moment in history which is just going on. ... That just sort of makes the whole thing have a greater resonance."

This piece was produced with production help from Esme Nicholson.

The boat was the SS Giovanni, which seemed only appropriate given the fact that at least three of its passengers, including myself, had been in the SS. It was a medium-sized boat with two funnels, a view of the sea, a well-stocked bar, and an Italian restaurant. This was fine if you liked Italian food, but after four weeks at sea at eight knots, all the way from Genoa, I didn't like it and I wasn't sad to get off. Either I'm not much of a sailor or there was something else wrong with me other than the company I was keeping these days.

We steamed into the port of Buenos Aires along the gray River Plate, and this gave me and my two fellow travelers a chance to reflect upon the proud history of our invincible German navy. Somewhere at the bottom of the river, near Montevideo, lay the wreck of the Graf Spee, a pocket battleship that had been invincibly scuttled by its commander in December 1939, to prevent it from falling into the hands of the British. As far as I knew, this was as near as the war ever came to Argentina.

In the North Basin we docked alongside the customs house. A modern city of tall concrete buildings lay spread out to the west of us, beyond the miles of rail track and the warehouses and the stockyards where Buenos Aires got started — as a place where cattle from the Argentine pampas arrived by train and were slaughtered on an industrial scale. So far, so German. But then the carcasses were frozen and shipped all over the world. Exports of Argentine beef had made the country rich and transformed Buenos Aires into the third-largest city in the Americas, after New York and Chicago.

The three million population called themselves portenos-- people of the port — which sounds pleasantly romantic. My two friends and I called ourselves refugees, which sounds better than fugitives. But that's what we were. Rightly or wrongly, there was a kind of justice awaiting all of us back in Europe, and our Red Cross passports concealed our true identities. I was no more Dr. Carlos Hausner than Adolf Eichmann was Ricardo Klement, or Herbert Kuhlmann was Pedro Geller. This was fine with the Argentines. They didn't care who we were or what we'd done during the war. Even so, on that cool and damp winter morning in July 1950, it seemed there were still certain official proprieties to be observed.

An immigration clerk and a customs officer came aboard the ship, and as each passenger presented documents, they asked questions. If these two didn't care who we were or what we'd done, they did a good job giving us the opposite impression. The mahogany-faced immigration clerk regarded Eichmann's flimsy-looking passport and then Eichmann himself as if both had arrived from the center of a cholera epidemic. This wasn't so far from the truth. Europe was only just recovering from an illness called Nazism that had killed more than fifty million people.

Eichmann's meat cleaver of a face twitched nervously. "Technician," he said, and mopped his brow with a handkerchief. It wasn't hot, but Eichmann seemed to feel a different kind of heat from that felt by anyone else I ever met.

Meanwhile, the customs official, who smelled like a cigar factory, turned to me. His nostrils flared as if he could smell the money I was carrying in my bag, and then he lifted his cracked lip off his bamboo teeth in what passed for a smile in that line of work. I had about thirty thousand Austrian schillings in that bag, which was a lot of money in Austria, but not so much money when it was converted into real money. I didn't expect him to know that. In my experience, customs of?cials can do almost anything they want except be generous or forgiving when they catch sight of large quantities of currency.

"Would you mind showing me?"

I heaved the bag onto a trestle table and was just about to unbuckle it when a man hurried up the ship's gangway, shouting something in Spanish and then, in German, "It's all right. I'm sorry I'm late. There's no need for all this formality. There's been a misunderstanding. Your papers are quite in order. I know because I prepared them myself."

He said something else in Spanish about the three of us being important visitors from Germany, and immediately the attitude of the two officials changed. Both men came to attention. The immigration clerk facing Eichmann handed him back his passport, clicked his heels, and then gave Europe's most wanted man the Hitler salute with a loud "Heil Hitler" that everyone on deck must have heard.

Eichmann turned several shades of red and, like a giant tortoise, shrank a little into the collar of his coat, as if he wished he might disappear. Kuhlmann and I laughed out loud, enjoying Eichmann's embarrassment and discomfort as he snatched back his passport and stormed down the gangway and onto the quay. We were still laughing as we joined Eichmann in the back of a big black American car with a sign, VIANORD, displayed in the windshield.

"I don't think that was in the least bit funny," said Eichmann.

Reprinted from A Quiet Flame by Philip Kerr by arrangement with Marian Wood/Putnam, a member of Penguin Group (USA), Inc., Copyright (c) 2009 by Phillip Kerr. 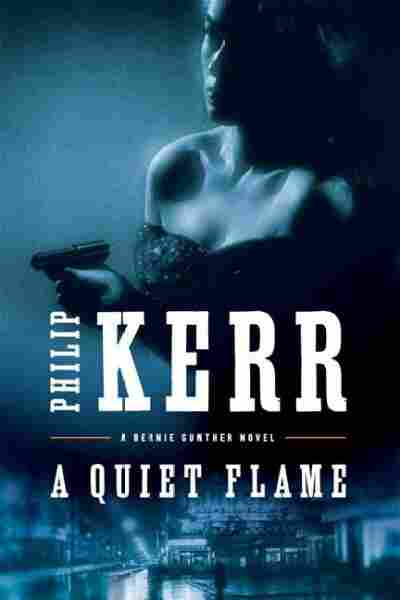