Archie Marries Veronica! Not a Dream! Not an Imaginary Story! Oh. Wait.

Archie Marries Veronica! Not a Dream! Not an Imaginary Story! Oh. Wait. 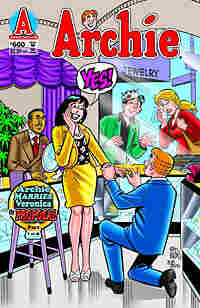 Stand down, people; return to your homes. Stand down, CNN. Stand down, Associated Press. Stand down, guy who sold your 1942 issue of Archie #1 in a ginned-up protest over the snubbing of Betty. (That $37K you just made? Cold comfort, I know.)

Stand down, internet forum commenters expressing either alarm ("Veronica? WTF????") or arrant creepiness ("BOTH B AND V ARE HOT ARCHIE SHOULD GET EM BOTH IN THE SACK AT THE SAME TIME LOL.") You, especially, need to stand down. Just ... way, way down.

What's got some folks' argyle sweater vests in a bunch is a six-issue storyline that kicks off this week, set in the Riverdale of five-years-hence.

In Archie #600, which hits comic shops today but won't be on regular newsstands until next month (snack on that, Piggly Wiggly!), the post-college Archie Andrews pops the question to Veronica Lodge, she of the raven hair, conceited smirk and ample ... coffers. Next month, the wedding. The month after: It's twins!

(From that issue's press release: "Can Archie get through Lamaze class without causing a commotion?" A question for the ages.)

I realize this is going to sound redundant, as we're talking about a comic book that follows the wacky adventures of a kid with tic-tac-toe hair, but listen: It's just an Imaginary Story. They're not really getting married.

A world of pure imagination: What Ifs, Elseworlds, and Superman and Batman as surburban dads, after the jump.

Let no one begrudge Archie a good old-fashioned publicity stunt now and again. As we've discussed, the guy's been around. He's a survivor, and has every right to indulge in the kind of transparent PR hustling that is DC and Marvel's stock in trade.

So even though the resulting mainstream media coverage means comic geeks like me will have to spend some time on the phone having THOSE conversations with non-comics-reading friends ("No, yeah, I know what it said in the paper, but everyone only thinks Batman's dead. He's actually stuck in a cave in the prehistoric past. ...Yes, 'seriously'!") I say: go on with your bad ginger self, Archie Andrews.

And really, the coverage could have been a lot more hyperbolic. Most outlets picked up on the fact that this is a six-issue mini-series "event" and that Riverdale will revert to the status quo once it's over. And although some news items bought in all too readily to the "fans are outraged!" hype, most were more sanguine.

Here's my favorite AP headline, for example, and you really have to admire its steely, clear-eyed restraint: "Archie-Veronica Wedding Storyline Irks Some." Hee.

Canon Fodder: The Imaginary Story
Now, your classic Imaginary Story happens when writers briefly break with a character's established continuity (which is called "canon" by comics fans, and "mythos" by really pretentious comics fans.) If you've ever seen a sitcom or soap opera, you know what we're talking about here: dream sequences, flash-forwards, tales-within-tales. The Superman comics of the '50s and '60s were lousy with Imaginary Stories, many of which involved the pearls-and-pillbox-hat-era Lois imagining/writing/tropical-fever-dreaming herself a future as Superman's wife.

The early '50s also saw a couple of Imaginary Stories in which Batman retired from the game, married Batwoman, and begat li'l Bruce, Jr. Meanwhile Dick Grayson became Batman - well, "Batman II," anyway. Unmistakably so: In an odd sartorial move, Dick sported a costume identical to Bruce's, save for the very fashion-forward huge yellow Roman numeral II below the bat-insignia. And Bruce Jr? Yep - slap a giant "II" on the Robin suit and they were good to go.

A Levittown of Solitude
All superheroes have origins, but none of them have endings. That's where the Imaginary Story came in - it offered writers a chance to simulate the closure that the demands of ongoing narrative forever denied them. Here's an ending, these stories said, but it's not the ending - next month everything goes back to normal.

Which is likely why so many of those Silver Age Imaginary Stories focused on the death of Batman or Superman. Others revolved around an altogether different, more Oedipal kind of ending - exploring their role as fathers. Thus we got several glimpses of Batman and Superman as the ultimate suburban dads, a pair of Ward Cleavers in circus tights.

Before long, Imaginary Stories were so thick on the ground that the public came to expect them. Covers had to resort to defensively asserting the veracity of their contents with the soon-to-be-famous phrase: "Not a Dream! Not a Hoax! Not an Imaginary Story!"

Perhaps the most notable, and certainly the weirdest, tale of Batman and Superman as paterfamiliases came in the 1970s. The Saga of the Super-Sons posited Batman and Superman's offspring as a pair of right-on, swingin' teens bummed out by the generation gap, who didn't groove on the whole super-hero jazz, you dig? If you're feelin' like you wanna get hip to it, you can feed your head here.

What If?
Marvel's What If? title, which has seen several incarnations, is entirely devoted to the Imaginary Story. These done-in-one explorations of what might have happened if key moments in Marvel history had turned out differently exist solely to scratch the the fanboy's - and fangirl's - most fanatical itch.

Originally devoted to such readily graspable, big-picture questions as, "What if Spider-Man Joined the Fantastic Four?", the series subsequently became fascinated by increasingly arcane, AP-level head-scratchers like, say, "What if War Machine Had Not Destroyed the Living Laser?" Which ... uh, what?

The Best of All Possible Elseworlds
For several years, DC's Elseworlds imprint covered similar ground. Instead of exploring alternate timelines, these books tended to reiterate classic DC characters in different milieux. Superman lands in Soviet Russia instead of the US. Batman hunts Jack the Ripper in Victorian London. The Justice League rides tall in the saddle in the Old West. The ability to play so fast and loose with characters whose stories were otherwise so narrowly defined made for some intriguing tales.

So this whole Archie-marries-Veronica meshugas is a publicity stunt, yes. But it's something more - only the latest chapter in a proud, ongoing comic book tradition.

Besides, the smart money says that the last three books in this six-issue mini-series will flip the script, and posit a future in which Archie asks Betty for her hand while Veronica fumes.

Dollars to donuts that'll send Ronnie into Reggie's arms, where - let's face it - a savvy operator like her has always belonged. They'll go off to start a securities firm that Ponzi-schemes the hell out of all those Riverdale chumps, and live a long, good life off of Miss Grundy's retirement savings.