Accessibility links
La. Family Finishes Rebuilding, But Struggles Go On Four years after Hurricane Katrina, Louisiana residents Donald and Colleen Bordelon say things are looking better. The construction on their house is finally complete. But their struggles aren't over — and there are some things they'll never get back. 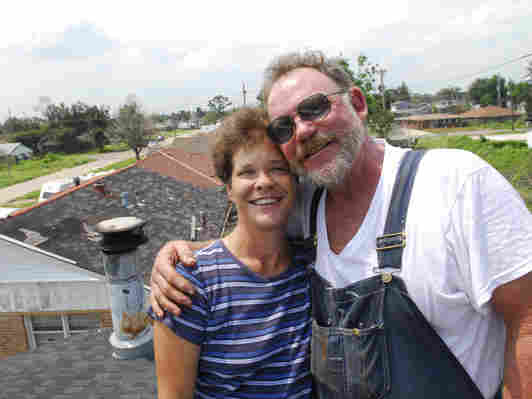 Colleen and Donald Bordelon on the roof of their home in August 2006. Cheryl Gerber for NPR hide caption

The construction on their house in St. Bernard Parish, just outside of New Orleans' Lower Ninth Ward, is finally finished. They have new neighbors, a new street and a new sidewalk.

And when they need to, they take matters into their own hands.

"I'm still cutting my neighbor's grass next door and the lot across the street," Donald Bordelon tells NPR's Steve Inskeep, who first spoke with the couple in the weeks after the 2005 storm.

Donald says grass on abandoned properties can grow as high as 6 feet tall. "I just hate living next door to something like that."

But four years out, the Bordelons are still struggling. They lost nearly everything in Katrina. The closest grocery store is across town, the hospital hasn't been rebuilt, and they're still getting used to all the new businesses.

"But like everything else, you adapt," Colleen says. "What can you do? Scream?"

Donald, who spent the past four years working on their home, says it's his garage and tools that he really misses. "I ain't got 1/16th of what I had before," he says. "It'd cost you a fortune to replace everything, you know?"

And because he grew up in the house, that means he lost some of his parents' things, too.

"A lifetime to my daddy. The stuff he collected," he says. "Stuff you'll never get back again."

Still, Colleen admits she and Donald sometimes have a hard time remembering what's been lost.

And then they make do with what they still have.

Four Years With The Bordelons