In a career spanning more than four decades, Cree Indian singer-songwriter Buffy Sainte-Marie has recorded numerous albums and written Oscar-winning songs. In the 1960s folk revival, she was a folk icon among Bob Dylan and Joan Baez. On her first album in 13 years, Running for the Drum, she expands on the inventive mix of Native American rhythms, electronica and folk music she began many years ago. 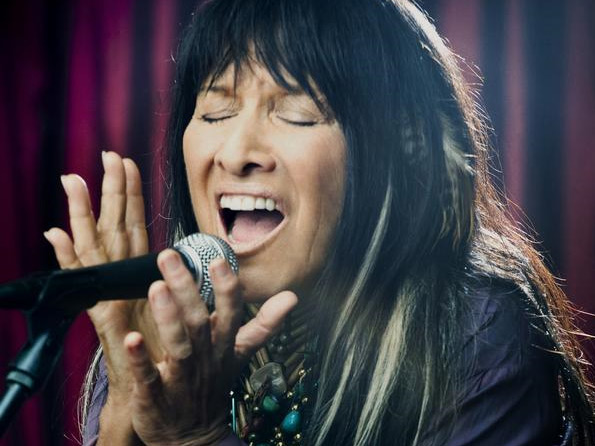 Sainte-Marie In The Studio 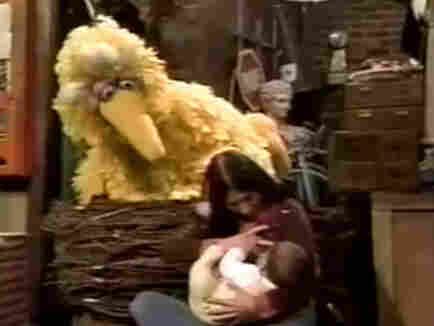 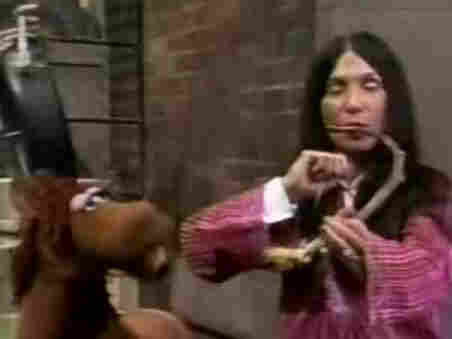 The second track of the new album, "Cho Cho Fire," is a driving rock song featuring a 30-year-old field recording.

"The Black Lodge Singers were at a powwow maybe 30 years ago," Sainte-Marie tells host Scott Simon. "My nephew went to the meeting in Saskatchewan and recorded a snippet of them when they were kids. And they have gone on to become one of the most beloved powwow groups in the world. I took a snippet of this 30-year-old cassette, and I embedded it into a new song I was writing called 'Cho Cho Fire.' "

Sainte-Marie was one of the first songwriters to take advantage of emerging music technology in the late '60s. On her 1969 album Illuminations, nearly all the electronically processed sounds came from Sainte-Marie's voice or guitar.

"I really had a head start on digital technology, because I entered it by the way of music," Sainte-Marie says.

On Tour To Get Away

In between albums, Sainte-Marie keeps herself busy. For the past 13 years, most of Sainte-Marie's time has been occupied by The Cradleboard Teaching Project, which provides updated curricula for educators about Native Americans.

Apart from her music career, Sainte-Marie was once a regular on Sesame Street, where she taught children about sibling rivalry, Native American people and practices, and breast-feeding.

In 2002, John Herrington was the first Native American to fly in space, and NASA invited Sainte-Marie to be a part of the launch. She says she was thinking about the rural places in the Western Hemisphere where "you can still see the stars and the trees and the animals." That inspired her to sing and eventually record "America the Beautiful" for Running for the Drum.

A Song For A Dollar

Sainte-Marie is a big proponent of music on the Internet. While she doesn't consider herself a techie, she says she uses programs for art, songwriting and swapping music.

Case in point: Sainte-Marie gave away the publishing rights to her famous tune "Universal Soldier" for one dollar.

The story goes that The Highwaymen came into The Gaslight in Greenwich Village in New York and heard "Universal Soldier." They came up to her and said they wanted to record the song. When asked who the publisher was, Sainte-Marie responded, "What's that?"

Within minutes, someone had made up a contract on a napkin to buy the publishing rights for one dollar. Ten years later, Sainte-Marie bought it back for $25,000.