Accessibility links
Music Written For Monkeys Strikes A Chord Monkeys don't normally like human music. They prefer silence. But when researchers composed songs reminiscent of monkey vocalizations, the monkeys responded. This raises the philosophical question of what music really is and may bring us closer to writing ditties that appeal exclusively to other species. 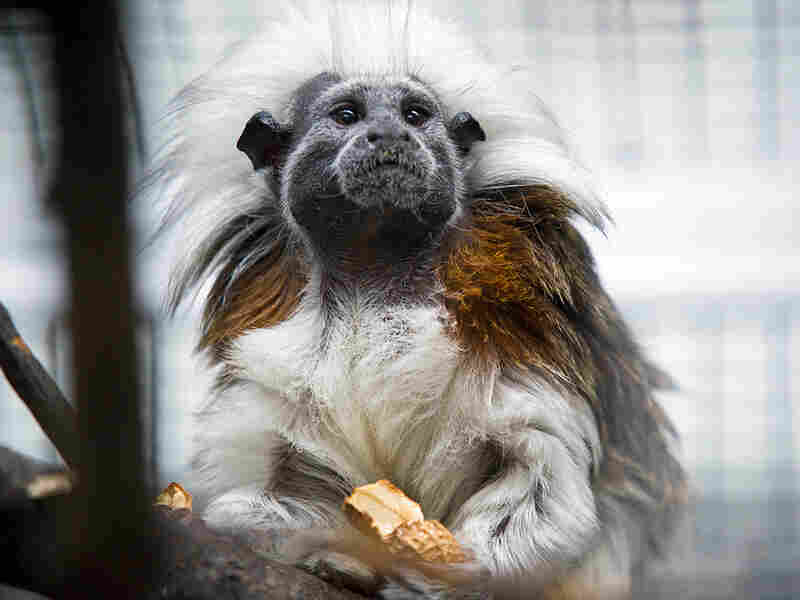 In the study, cotton-top tamarins grew calmer after they heard music compositions based on their own calm, friendly calls, and became more agitated when exposed to music that contained elements of their own threatening or fearful calls. Bryce Richter/University of Wisconsin-Madison hide caption 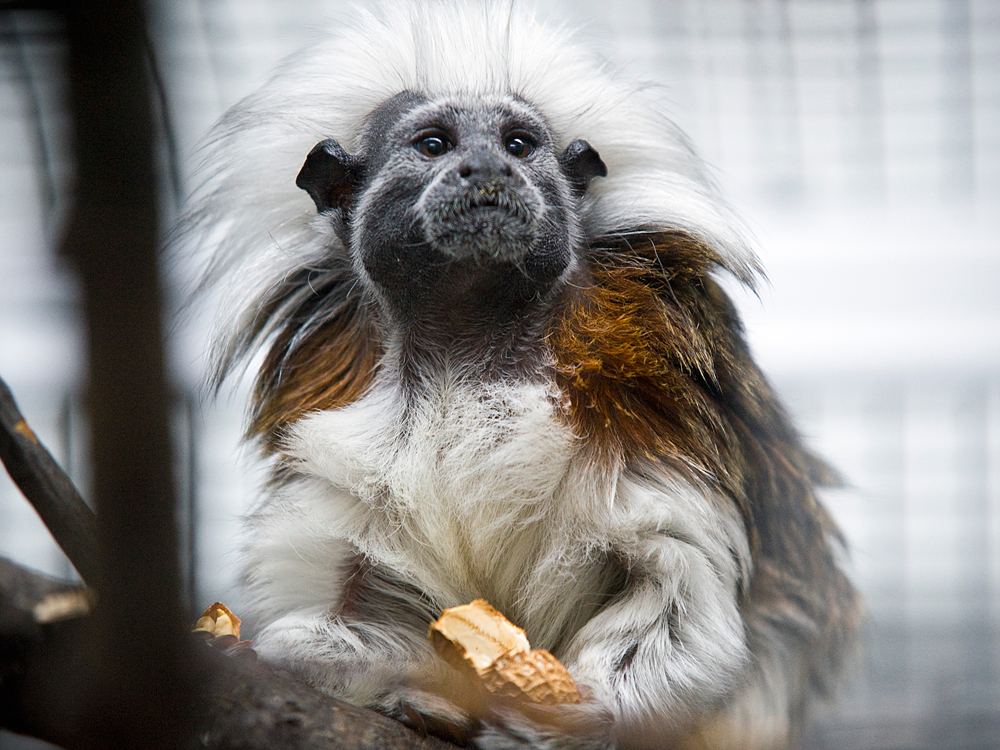 In the study, cotton-top tamarins grew calmer after they heard music compositions based on their own calm, friendly calls, and became more agitated when exposed to music that contained elements of their own threatening or fearful calls.

Music has great power to alter our emotions — making us happy or sad, agitated or calm. Psychologists have tried in vain to figure out why that happens. Now, a composer says he's has a clue. And he got it by writing music not for humans, but for monkeys.

David Teie plays cello with the National Symphony Orchestra and even on occasion with the heavy metal band Metallica. He's also a composer.

Teie has been developing a theory to explain why music plays on human emotions. His theory is that music relates to the most primitive sounds we make and respond to, like laughter, heartbeats, or a mother's cooing.

"When I thought I had all the pieces put into place, I figured any good theory is testable, so one of the ways to test it would be to see if I could write music that would be affective for species other than human," he says.

He wrote to Chuck Snowdon, a psychology professor who managed a colony of monkeys called cotton-top tamarins at the University of Wisconsin. Snowdon was happy to cooperate and sent Teie recordings he'd made in the lab.

One recording was of a monkey that felt threatened by a veterinarian. "He's very upset," Snowdon explains. "He's coming out to the front of the cage to attack or to show aggressiveness."

He also sent a screechy sound that, believe it or not, monkeys make when they're feeling mellow.

With those samples and a few others as a starting point, Teie composed music for monkeys.

"Basically I took those elements and patterned them the way we do normally with music," he says. "You repeat them, take them up a [musical] third — you know, using the same kind of compositional techniques we use in human music."

He played the compositions on his cello and then electronically boosted them up three octaves, to a pitch that matched the monkeys' voices. Monkeys don't respond at all to music written for humans, but they did respond when they heard this composition.

Snowdon says people may not be calmed by this relatively fast tempo of one of the pieces, but the monkeys in his lab certainly were.

"This is a rhythm that approaches the resting heart rate of a tamarin and had this calming effect on them even though the pum-pum-pum in the background was maybe a bit faster than we would expect as humans for this music."

Compare that with the music Teie wrote to try and agitate the monkeys, a la Metallica.

"Monkeys reacted to this by increasing their movement," Snowdon says. "They moved faster through their environment. And they also showed increase in a whole variety of behaviors we have associated with anxiety."

Exploring The Nature Of Music

Snowdon and Teie report these findings in the journal Biology Letters. They argue these aren't simply sounds that imitate monkey voices — they are actually music. Teie says they are written on a staff, played on a musical instrument, and have rhythm and tonal structure.

But is it really music?

"I wouldn't say so, to be honest," says Josh McDermott, who studies music and the brain at New York University. "There's always this issue of how to define 'music.'"

And in this case, McDermott says, it's impossible to say whether the monkeys are reacting to the musical elements that Teie has added to the recordings or simply to the sounds that mimic monkey voices.

And that's the nub of the issue. Teie is, after all, trying to understand the nature of music — what makes it tug at his heartstrings. It's a question so powerful, Teie says, at first he was afraid to even ask it.

"The paradox is that I distinctly remember thinking once that when they figure out why Puccini makes me cry, I hope I die the day before the news gets out. But the great news about this exploration into music is it's actually more magical and wonderful once you realize how it works."

In fact, Teie is now hoping to use his insights to compose music that will appeal to other species — and to trigger even deeper emotional reactions in us.