Accessibility links
The Amazon Road: Paving Paradise For Progress? When completed, the Interoceanic Highway will stretch from Brazil's Atlantic coast to Peru's Pacific ports. It is creating economic opportunities for locals. But conservationists worry about the risks to the Amazon rainforest and its unrivaled biodiversity.

High in the Andean mountains, in the tiny community of Munapata, it's easy to miss a marker for one of the largest infrastructure projects in Peru's history.

Traveling Along The Amazon Road

At the corner of an inauspicious turnoff onto a narrow road lined by a few simple houses sits a signpost reading: "Welcome to the Interoceanic Highway South. Sao Paolo, Brazil 4601 kilometers."

The sign marks the beginning of a stretch of road that, when completed, will provide the final link to a highway that will stretch from Brazil's Atlantic coast to Peru's Pacific ports.

The project recalls the 19th-century American notion of Manifest Destiny — the idea that U.S. expansion across North America was ordained, pre-determined and inescapable, says Bruce Babbitt, former secretary of the interior during the Clinton administration. 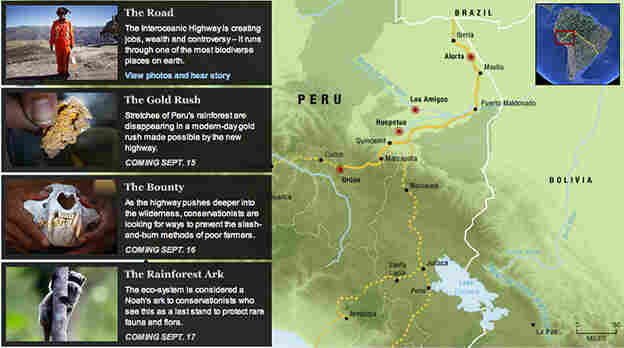 Stories From The Amazon Road

"Manifest Destiny said we will cross the continent on the way to China because we cannot be a complete nation until we straddle two oceans and face out into the Pacific," he says.

Babbitt was part of a small group of conservationists and journalists who recently took a fact-finding trip down the Peruvian portion of the highway.

The road will bring goods, work and other opportunities to those living in Peru's remote Andean communities. But it also is fueling concern among conservationists anxious over the potential impact on Peru's Amazon rainforest, one of the most biodiverse places in the world.

Babbitt says the highway construction is being promoted and partly financed by Brazil — the regional economic superpower — "to finally reach the dream of three centuries, which is that even if there is not a Brazilian flag, at least there will be a Brazilian economy on the shores of the Pacific."

The highway is part of a massive infrastructure pact between Brazil and Peru. Along with the road and two others that are now being paved linking the two countries, Brazil has agreed to finance five massive dams in Peru. They will be used almost exclusively to satisfy Brazil's growing energy needs.

Conservationists are concerned about how these projects will affect the Peruvian Amazon, says Babbitt, now chairman of the World Wildlife Fund in the U.S. 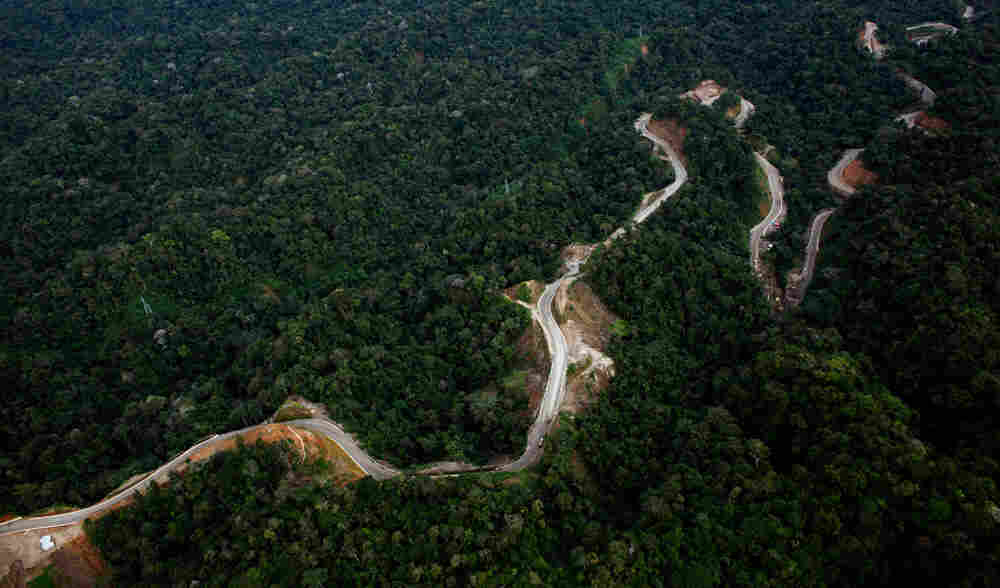 When completed, the Interoceanic Highway will link Brazil's Atlantic coast to Peru's Pacific ports. The road will bring goods, work and other opportunities to residents of Peru's remote Andean communities. But the potential impact on Peru's biodiverse Amazon rainforest is fueling concern. John Poole/NPR hide caption 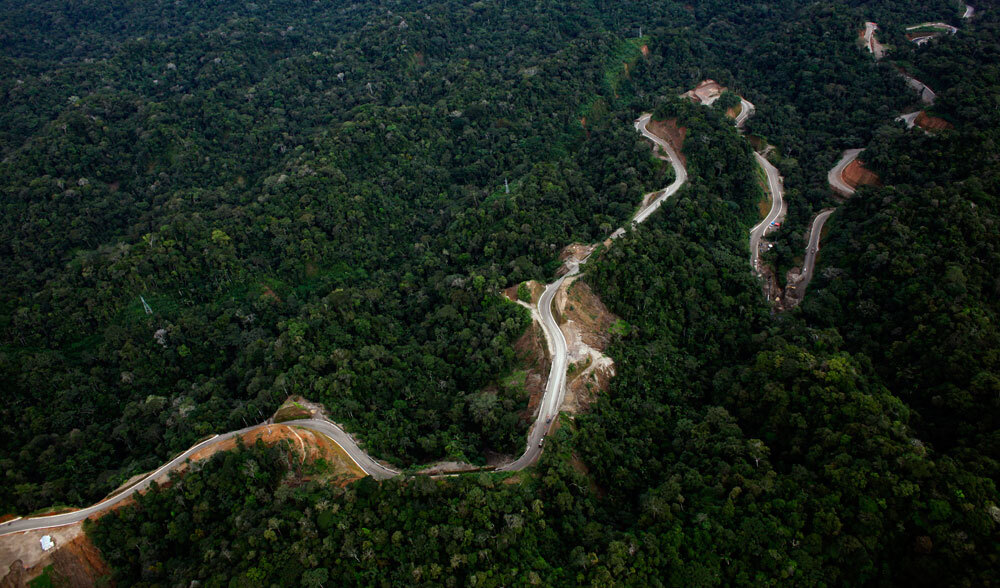 When completed, the Interoceanic Highway will link Brazil's Atlantic coast to Peru's Pacific ports. The road will bring goods, work and other opportunities to residents of Peru's remote Andean communities. But the potential impact on Peru's biodiverse Amazon rainforest is fueling concern.

Peru's Amazon is the "greatest source of untrammeled wilderness and biodiversity and extraordinary geological and cultural tectonic reality in this whole planet," Babbitt says.

He adds that what happened to Brazil's Amazon in recent decades is a cautionary tale.

Brazil built its trans-Amazonian highway in the 1970s. The goal was to integrate the remote and poor Amazon region with the rest of the country. An unintentional consequence: It opened up large tracts of pristine jungle to exploitation by farmers, ranchers and loggers, leading to almost unchecked deforestation.

Already, the Interoceanic Highway has made it easier for the expansion of illegal gold mining. Gold prices are at record levels, and the possibility of striking it rich has drawn hundreds of impoverished Peruvians into the jungle lowlands in search of a livelihood panning for alluvial gold — the type of tiny deposits found in the soil of riverbeds.

In Munapata, the highway project is welcomed by locals who believe the road is carrying benefits to the town.

Shopkeeper Justina Yupanqui says the road means prosperity. She opened her small store over the summer and primarily sells drinks and snacks to passing drivers.

Further east along the highway, the Interoceanic cuts through the dramatic, breathtaking scenery of the Andes Mountains, with its snowcapped peaks and deep ravines powdered with clouds.

It's important to have this road for the development of our country and this region. It's an important route that will open up trade between Brazil and Peru.

Most of the road work in this area is completed. As the road winds its way down the slopes, the dazzling scale of the engineering project becomes visible.

A string of massive camps housing thousands of workers line the highway. The men and women living here work in day and night shifts using heavy machinery and backbreaking labor to carve the road into the brutal rock face of the Andes.

The company that is overseeing all this is Odebrecht, an enormous Brazilian engineering and construction firm.

"They are, in a sense, a partner to the Brazilian government, and at least in this area they are the lead partner in the geopolitical vision in Brazil's march to the Pacific. They are really the spearhead," Babbitt says.

Paulino Ccapcha works for Odebrecht overseeing one of the work crews. He says he has worked on many road projects, and that wherever roads go, prosperity follows for the communities who live along it.

"It's important to have this road for the development of our country and this region," he says. "It's an important route that will open up trade between Brazil and Peru."

But some along the road worry about the undesirable changes that the Interoceanic Highway already has brought. 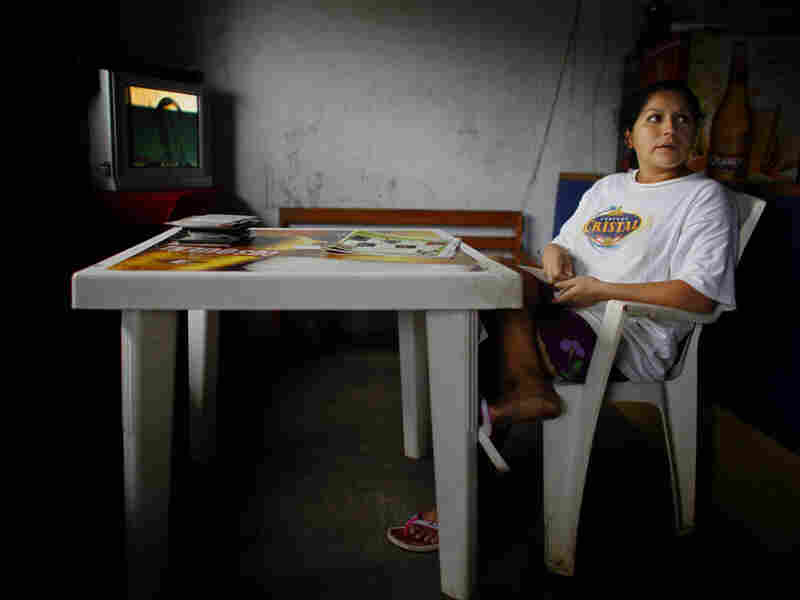 Rocio Ramirez runs a beer warehouse in Quincemil, Peru. Even though the highway is good for business, Ramirez says she is not looking forward to the completion of the highway. The road brings trouble in the form of rowdy men and prostitution, she says. John Poole/NPR hide caption 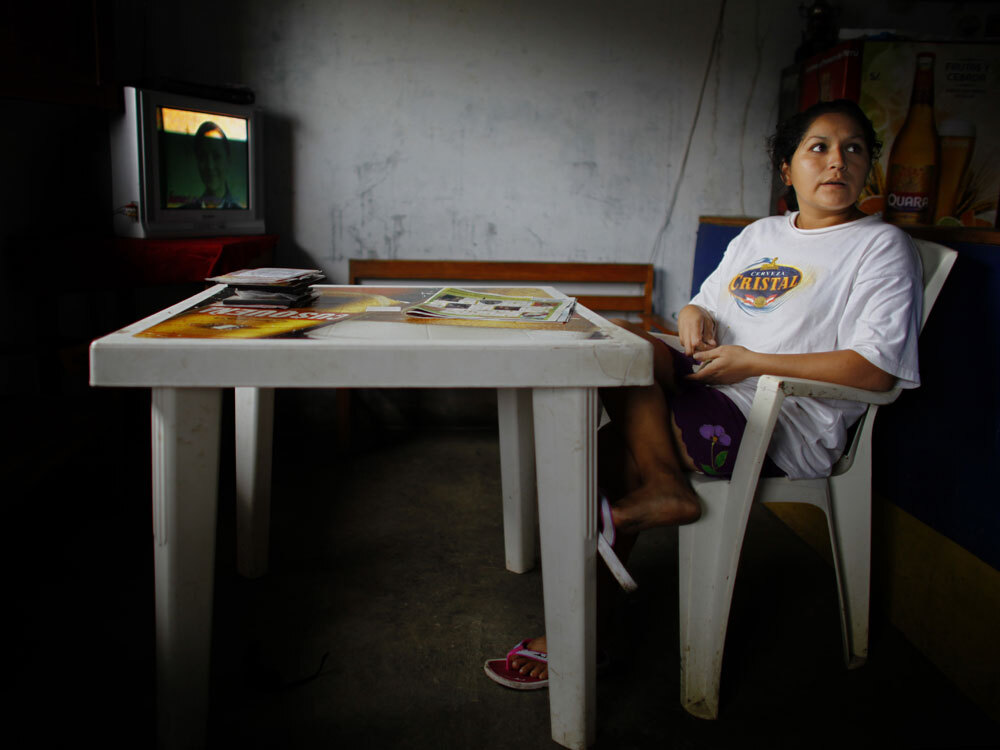 Rocio Ramirez runs a beer warehouse in Quincemil, Peru. Even though the highway is good for business, Ramirez says she is not looking forward to the completion of the highway. The road brings trouble in the form of rowdy men and prostitution, she says.

In her beer warehouse in the town of Quincemil, Rocio Ramirez sits in a plastic chair watching the water sluice down the dirt road. Her slight, 23-year-old frame is folded in shorts and an oversized white T-shirt.

In Quincemil, on the lower slopes of the Andes, on the edge of the Amazon, it seems to rain all the time. Local wags say the town was named after the 15,000 millimeters — about 600 inches — of precipitation it purportedly received one year.

Not much has gone on in the town for most of its isolated existence, until now, Ramirez says.

"The price of everything has gone up. It's because there are lots of new men living nearby and working on the road. I am very worried. With all these unknown people that have arrived, there has been violence, men who are drunk, prostitution," she says.

Ramirez says her business has been good with all the new nightclubs that have opened.

"But I don't like what is happening here. We've seen a lot of young girls who've gotten pregnant, and we hear that there are a lot of sexual diseases being passed around," she says.

In an office across the street, biologist Pedro Sentero worries about what the influx will mean for the area's environment.

On the one hand, he says the road might promote eco-tourism. It will be easier for people to reach the town from Cuzco, which is home to one of Latin America's most popular tourist sites, the ruins of Machu Picchu, a pre-Columbian Incan site about 8,000 feet above sea level.

But in recent years, Peruvians from the highlands have migrated to the more fertile lowlands, Sentero says. They cut down trees and clear land for farming, or work in the gold mines. He fears the road will only speed up that process.

"The problem is that Peru has some very good laws on the protection of flora and fauna, but the issue is those laws are not enforced," he says. "The government is in charge of making sure those laws are observed, but it does nothing, practically speaking."

The problem is that Peru has some very good laws on the protection of flora and fauna, but the issue is those laws are not enforced. The government is in charge of making sure those laws are observed, but it does nothing, practically speaking.

Brazil nut harvesting is encouraged as a sustainable way to exploit the rainforest without harming it. But some growers say it doesn't produce enough money to make a good living. The highway is bringing more people eager to clear-cut the land for logging or to plant crops.

"People have been working here harvesting Brazil nuts for the last century. It's a resource that produces income for probably half the population of this region. And we are killing it off," says conservationist Enrique Ortiz.

Many environmentalists speak of this region as a living ark — a place rich in flora and fauna to be preserved as population growth and climate change threaten the globe.

Normally, governments grant oil concessions and mining concessions. In Peru, a conservation concession functions the same way — the stewards of the area are in a long-term contractual partnership with the national government. But the purpose, instead of the extraction of natural resources, is environmental conservation.

Adrian Forsyth, president of the Amazon Conservation Association, runs the Los Amigos Biological Station, a concession created in 2001 as a preserve for the area's abundance of plants, insects and animals. Among the list: 1,005 species of birds, 13 types of monkeys, 120 species of bats.

"To a biologist, this has to count as one of the most important places on the planet," Forsyth says. "We have this enormous concentration of biodiversity where the Andes runs up against the Amazon."

Babbitt says he believes that what happens to Peru's Amazon region is vital.

"If we destroy the biological heritage of the Andes and the Amazon basin, we are impoverishing Peruvians, Brazilians and, indeed, the entire world," he says.

In the audio portion of Part 1 of the interactive graphic 'Stories From the Amazon Road,' we referred to Sao Paulo as Brazil's capital. In fact, Brasilia is the capital of Brazil. The audio has been corrected.