Accessibility links
What Happened To The Push To Reform Wall Street? After last year's crash, there were loud calls to revamp financial rules to prevent another disaster. But the energy for a regulatory overhaul appears to have dissipated, even though the economy remains troubled.

What Happened To The Push To Reform Wall Street?

What Happened To The Push To Reform Wall Street? 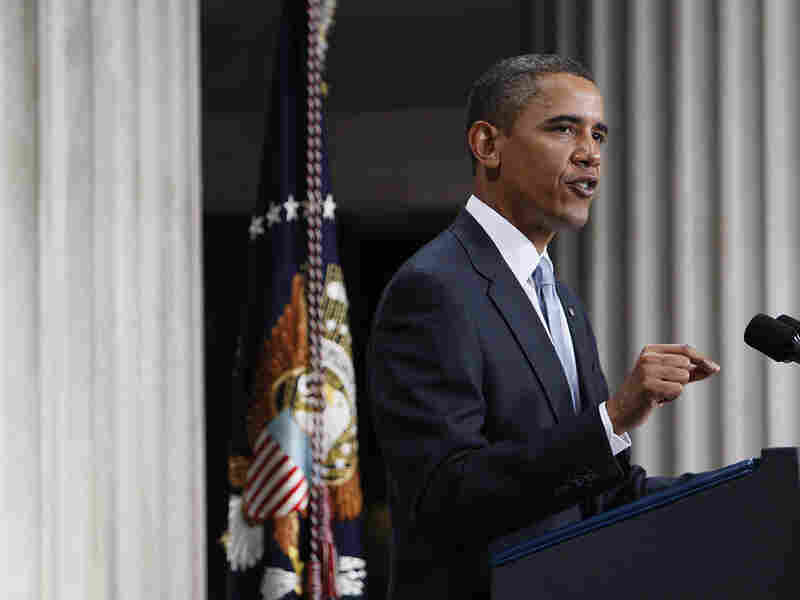 President Obama speaks about the financial crisis Monday, on the anniversary of the Lehman Brothers collapse, at Federal Hall on Wall Street. Charles Dharapak/AP hide caption 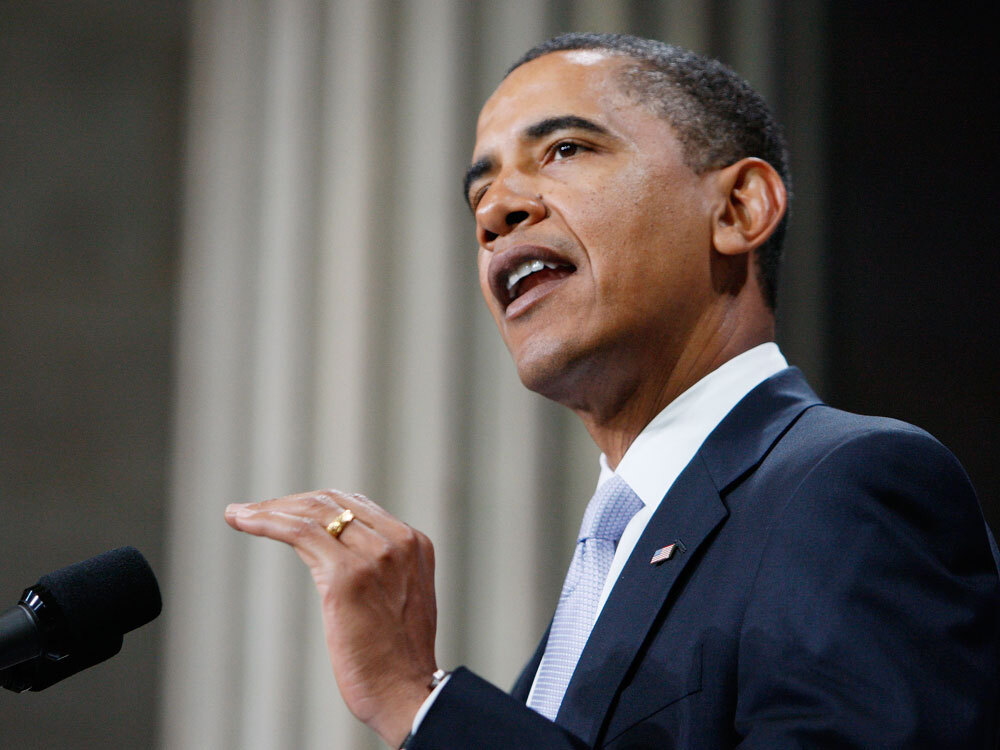 President Obama speaks about the financial crisis Monday, on the anniversary of the Lehman Brothers collapse, at Federal Hall on Wall Street.

In an address delivered from the heart of Wall Street, the president warned against a return to "the days of reckless behavior and unchecked excess that was at the heart of this crisis, where too many were motivated only by the appetite for quick kills and bloated bonuses.

"Those on Wall Street cannot resume taking risks without regard for consequences, and expect that next time, American taxpayers will be there to break their fall."

He laid out a sweeping set of reforms, including a new agency charged with protecting consumers in financial transactions and stronger government authority to protect against the risk of large financial firms collapsing.

But Obama's speech comes at a very different time from a year ago, when the massive investment firm Lehman Brothers failed, sparking a crisis that led to a near-collapse of the entire financial system. In the immediate wake of the stock market crash and soaring unemployment, there were loud cries for tighter new financial regulations to prevent a repeat of such a painful episode.

Today, the energy behind such a push seems to have dissipated. The economy has not recovered yet, but it's no longer in free fall. The stock market has risen from the depths of earlier this year.

"While this recession is comparable to the 1930s in some respects, the deprivation and poverty is less visible than it was in the '30s," says Geoffrey Hodgson, a research professor in business studies at the University of Hertfordshire in the United Kingdom.

"There's a complacency amongst the public at large and among politicians."

In his speech, Obama acknowledged his concern about growing complacency as the economy starts to recover. And he singled out the financial industry for a warning.

Financial Crisis: One Year And Counting

"Instead of learning the lessons of Lehman and the crisis from which we are still recovering, they are choosing to ignore those lessons," Obama said. "They do so not just at their own peril, but at our nation's."

But even while he criticized the financial industry for returning to business as usual, Obama refrained from demonizing banks or trying to stir populist outrage. Instead, he said he wanted to work with financial institutions to design reforms.

Michael Bernstein, an expert in political and economic history who is currently serving as provost at Tulane University, says Obama's position is very different from that of President Franklin Roosevelt during the Great Depression, when FDR harnessed popular anger against bankers to pass key financial reform laws as part of the New Deal.

Both then and now, it was largely up to the president to rally public sentiment, Bernstein says. "But I don't see Obama out there on the road, saying, 'You have to help me here go after the moneybags.' That's the kind of card Roosevelt played."

Americans are still clearly concerned about the possibility of a repeat of the crash. A recent Associate Press poll found that more than two-thirds of respondents are not confident that the government has taken enough steps to prevent another financial meltdown.

The bank bailouts and the large bonuses and compensation packages paid to executives at large financial firms that required government rescues both generated public outrage. But that anger appears to have waned over time, Bernstein says. And it is likely to diminish further if the economy continues to show signs of improvement.

"As we get a little more distance from the actual collapse and things begin to stabilize, then people think we don't need to take as much drastic action," says Bernstein. "That's a very disappointing reality."

The Challenges Of Mobilizing For Change

Heather Booth hopes that is not the case. She run Americans for Financial Reform, an advocacy group with nearly 200 members, including AARP and the AFL-CIO. As her group works to organize a push for widespread financial reforms, she expects a growing grass-roots call for change.

"We think people have been operating out of not just frustration, but fear," Booth says. "If that fear turns to hope for a real solution, and also, as fear changes to anger towards those who created this, we think there will be mobilization for change."

But mobilizing a mass movement is difficult under any circumstances, and the causes of this economic crisis are particularly complex and ill-understood by the American public.

"There is so little transparency and accountability at the largest banks and Wall Street," Booth says. "And as a result, people can't always see the connections between the disaster they see in their personal financial lives and the institutions that caused it."

Technology has also changed how people organize and express themselves politically, reducing the role of old-fashioned political protests.

"You can e-mail a legislator or you can update your Facebook page to say that you're ticked off — and that's enough for some people," says Mike Wagner, a political scientist at the University of Nebraska. "There's not as much of a need or an opportunity for people to gather together and call for changes to the political system. They can do it in virtual communities, which doesn't require them to show up."

Aside from Obama, the push for a financial overhaul has few visible spokesmen. Politicians in Washington have largely been focused on other issues, particularly the volatile health care debate. And even with Obama's speech on Monday, his administration is likely to remain distracted by health care, two wars and other urgent challenges.

"If political leaders wanted to make it an issue, they could succeed in mobilizing people, but they're not," says Robert Shapiro, a political scientist and expert on public opinion at Columbia University. "For the people to mobilize themselves, it would take either another big drop in the stock market, or if not that, something worse."

Still, even if Americans aren't clamoring for a regulatory overhaul, the rest of the world is, says Fred Block, a professor who specializes in economic and political sociology at the University of California, Davis.

"The Europeans, the Chinese and the Japanese are putting on continuous pressure," Block says. "If this were simply a matter of internal American politics, one would have to be more pessimistic. But the rest of the world has suffered from what we allowed to happen in our financial market."

Is Time On The Side Of An Overhaul?

Congress has also formed a national commission, modeled on the 9/11 Commission, to investigate the causes of the economic crisis and to recommend reforms. Some experts say this could help create a shared narrative of what went wrong and help educate Americans about the possible fixes. The commission's final report is not due until December 2010.

James Galbraith, a professor in government and business relations at the University of Texas, Austin, says that Washington has more time to implement changes than many people realize.

"The system broke, and it didn't recover," he says. "You're not about to go off on another subprime mortgage bender. There's isn't anyone out there who could do it, and housing values wouldn't support it."

While Wall Street may have recovered some of its luster, unemployment remains stubbornly high, and economists says the nascent recovery is unlikely to produce significant numbers of new jobs until next year at the earliest.

Indeed, some of the initial grass-roots pressure for change could regenerate if the economy fails to bounce back.

"There will continue to be a strong impulse in favor of reform, because the economy will have to be restructured to get growth going again," says Block. "It won't have the same visceral town hall meeting quality as the health care debate, but you will see the Obama administration mobilizing its base, and there will be a bubbling up of pressure from below."