Accessibility links
How A Professor Taught Me To Consult My Stomach Fred Stocking, an English professor at Williams College in Williamstown, Mass., left an indelible impression on NPR's Barbara Bradley Hagerty. Stocking, who died two months ago at 94, said three simple words that have influenced her for decades. 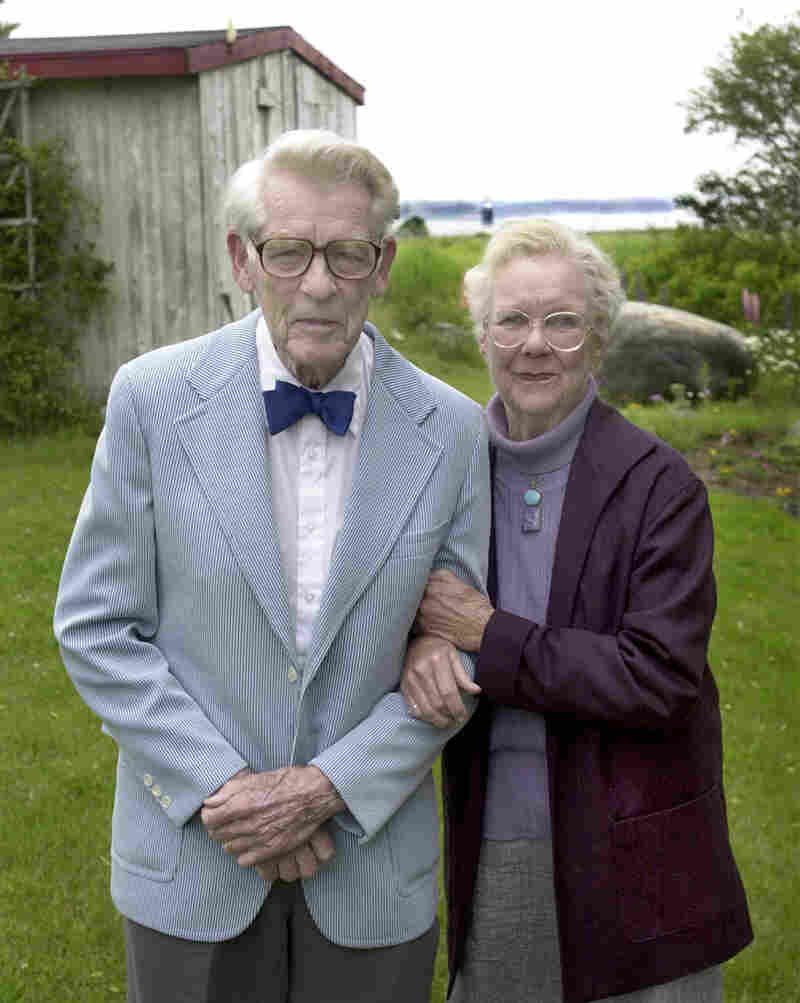 Fred Stocking and his wife, Carol. The professor at Williams College in Williamstown, Mass., who died in July at age 94, left an indelible impression on NPR's Barbara Bradley Hagerty. John Harvey hide caption 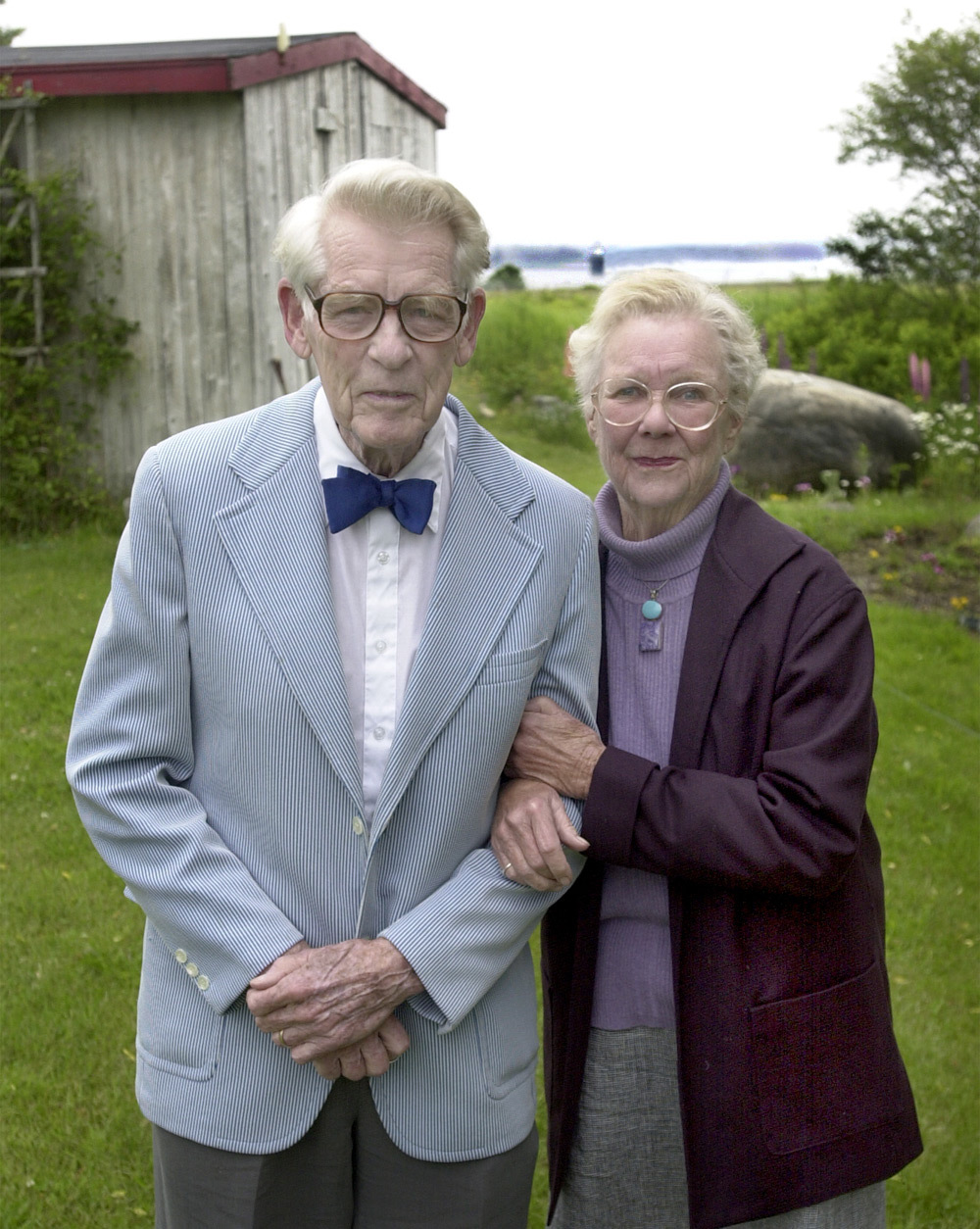 Fred Stocking and his wife, Carol. The professor at Williams College in Williamstown, Mass., who died in July at age 94, left an indelible impression on NPR's Barbara Bradley Hagerty.

I remember sitting in Shakespeare class, basking in my good luck. The wait list was nearly 100 people, but here I was, a new student at Williams College in Williamstown, Mass., watching the legendary Fred Stocking in action. In 1979, Dr. Stocking was a year shy of retirement, an icon to four decades of students in this small college in the Berkshires. He was lean and meticulous, with a bow tie and thick white hair, and he lived Shakespeare — doting on Puck, thundering through Hamlet, and lifting our gaze from the crass pursuit of A's to the beauty of weathered truths.

He encouraged me to make writing my career, and then unwittingly shaped that career. It happened when I asked him a random question: "How do you determine a student's grade?"

"Well," he said, "I add up the grades for the essays, quizzes, the midterm and final. I average them out. Then I consult my stomach."

Consult my stomach. No three words have influenced — or haunted — me more. As a reporter, I try to apply Dr. Stocking's stomach test: Is the story I'm telling not just accurate, but honest? Does it reflect my conscience as well as the facts? I've failed more times than I like, but that standard has marked the north on my compass for the past quarter-century.

I lost touch with Dr. Stocking for 20 years. But eight years ago, Fred — who insisted I call him by his first name — and I began exchanging letters every few months. And so, when I was invited to give a talk for our 25th reunion three years ago, I asked my 91-year-old former professor to introduce me. It was a rainy afternoon; the auditorium was packed. The crowd hushed as Fred Stocking walked tentatively across the stage, clutched the podium, and leaned into the microphone.

"My name is Fred Stocking!" he said, and the place went wild. It was like a schmaltzy Disney movie.

Is This Your Brain On God?

"You were my favorite professor," one said. Another added, "You made me care about ideas."

As for me, Fred's letters became a road map for growing old well. He began painting at 80, taking lessons every Tuesday. At 91, he played Gonzalo in The Tempest at the community theater. When his body began to fail, he watched the process with a sort of bemused detachment. "I've had a lot of horizontal time," he quipped in one letter. At his 94th-birthday party, Fred demonstrated his new motorized stair chair lift by waving like the Queen as he purred up and down the stairs. Later, with far more gusto than any 94-year-old should have possessed — and with uncanny timing — Fred belted out his trademark song from Broadway, "Lulu's Back In Town."

As Fred's body shut down, he leaned all the more on his mind. It was a sort of tit for tat with age. You take away my driver's license; I'll read the new biography of Shakespeare. You dim my vision; I'll listen to books on tape. He was ecstatic when his wife gave him a new translation of War and Peace. He was 92 when I sent him an early draft of my book Fingerprints of God: The Search for the Science of Spirituality. A year later, he sent back a seven-page critique, musing on the limits of scientific inquiry, the flaws of religious doctrine and the nature of death.

Fred approached his own death clinically. I can accept God as an idea, but not as a fact, he wrote. He was even more skeptical of the afterlife.

It's been a privilege knowing you. I'll live on in your memory. It's the best kind of immortality.

In early July, I flew up to Williamstown for what I knew would be my final visit. Fred lay on his bed, as faded as his sheets. We talked about Hamlet and A Midsummer Night's Dream. He said he wasn't sad about dying. I asked him if he thought that his consciousness might survive death. I thought with death around the corner, he might have warmed up to the afterlife. He looked at me keenly, as if to say, "I may have grown old, but I haven't gone soft."

"What's wrong with mystery?" he asked.

Then he cleared his throat. "It's been a privilege knowing you," he said, and I burst into tears. Fred patted my hand. "I'll live on in your memory," he said. "It's the best kind of immortality."

Fred died a few weeks later. As I read through his letters the other day, I came across his favorite poem by e.e. cummings: "If Everything Happens That Can't Be Done." I don't have a clue what it means. But I keep trying to unlock it. Because that's part of Fred's genius. Never stop puzzling over life. Swim in big ideas. And of course, consult your stomach.