Accessibility links
Pooh Faithful Return To The Hundred Acre Wood In the first authorized sequel to A.A. Milne's classic tales of Winnie the Pooh, author David Benedictus treads gently on the sacred woods of the original.

It used to be that all good things would come to an end, but these days, at least in the world of books and movies, there is always "the sequel." And so a new version of one of the most beloved children's classics — A.A. Milne's story of Winnie the Pooh — is being released.

"What I had to do was to imagine myself to be Milne. And the best way to do that was to visit the Ashdown Forest, which was where he lived and was the basis for the Hundred Acre Wood, and to read everything by and about him," says Benedictus. "When I'd read all that, I felt I could become him."

But Benedictus was not entirely alone in making this sequel. Illustrator Mark Burgess re-created the look of the original artwork, which was drawn by E.H. Shepard. And Benedictus also had input from both the trustees of Pooh Properties, and the publishers in the U.S. and in Britain. 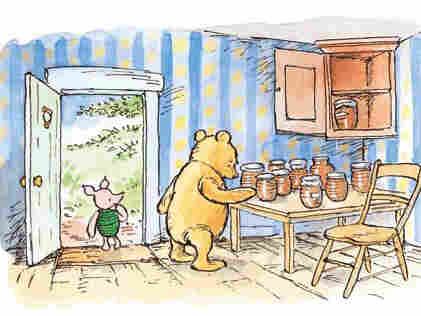 "With something like Milne, I think everyone knows the stories so well that there was quite a lot of pressure from people who wanted to have their finger in the pie," says Burgess. "I had to be very mature and very tolerant, and those are not my usual qualities. I'm a bit of an indiscreet sort of person. ... I think I am ready for the Senate now."

Benedictus says one decision that involved some wrangling was the creation of a new character; he was determined there should be one, though his first concept — a grass snake — was not well-received.

"There were those who thought a grass snake would be too scary for children," explains Benedictus. So instead, the new character became Lottie the Otter, whom the author describes as "a bit of a snob and ... a bit catty, too." 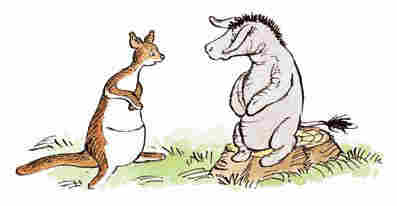 Aside from the addition of Lottie, the trustees and the publishers didn't want the characters to stray too much from the original. And Benedictus says he felt an obligation to be faithful to Milne's creation. But Philip Nel, a professor of children's literature at Kansas State University, says based on what he could glean from the first chapter, they may have played it too safe.

"It's almost like reading someone else's memory of A.A. Milne and E.H. Shepard," says Nel. "It's a pleasant memory, but why wouldn't you read the original? It's not like they've disappeared."

The result, says Nel, is a book that feels like an imitation: "They've got the characters down. Pooh is ruled by [his] tummy. Piglet is timid. Eeyore tends to be sarcastic and depressed." 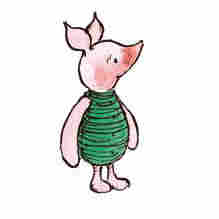 Benedictus says he expects some negative reaction, especially from those who feel no one should tread upon the sacred woods that Milne made famous. But he adds that it was important to him to remain faithful to Milne's world.

"If the worst comes to the worst and everyone thinks I've got it all wrong, I won't have destroyed the originals in any way at all," he says.

And, he adds, after years of working on it, Return to the Hundred Acre Wood feels like his own book, albeit one that he shares with Milne: "I couldn't have written it without Milne having set the scene and creating the characters for me. But, yes, I feel like he's a sort of old uncle sitting in the background either smiling or frowning at my efforts a little bit."

All images are from Return to the Hundred Acre Wood. Text by David Benedictus, illustrations by Mark Burgess. Copyright, 2009 by Trustees of the Pooh Properties. Dutton Juvenile is an imprint of Penguin Young Readers Group. 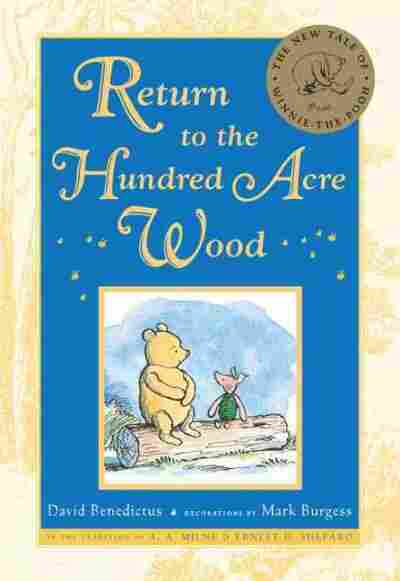 Return to the Hundred Acre Wood

by David Benedictus and Mark Burgess