Accessibility links
USDA Pushes Farmers Markets As Fresh Alternative Just steps away from the Obama family's home is what locals are calling the White House Farmers Market. It's both an experiment and an undisguised statement. The market and a handful of others around the country are part of a pilot project that Agriculture Secretary Tom Vilsack hopes will help people understand where their food comes from, so they can make informed choices. 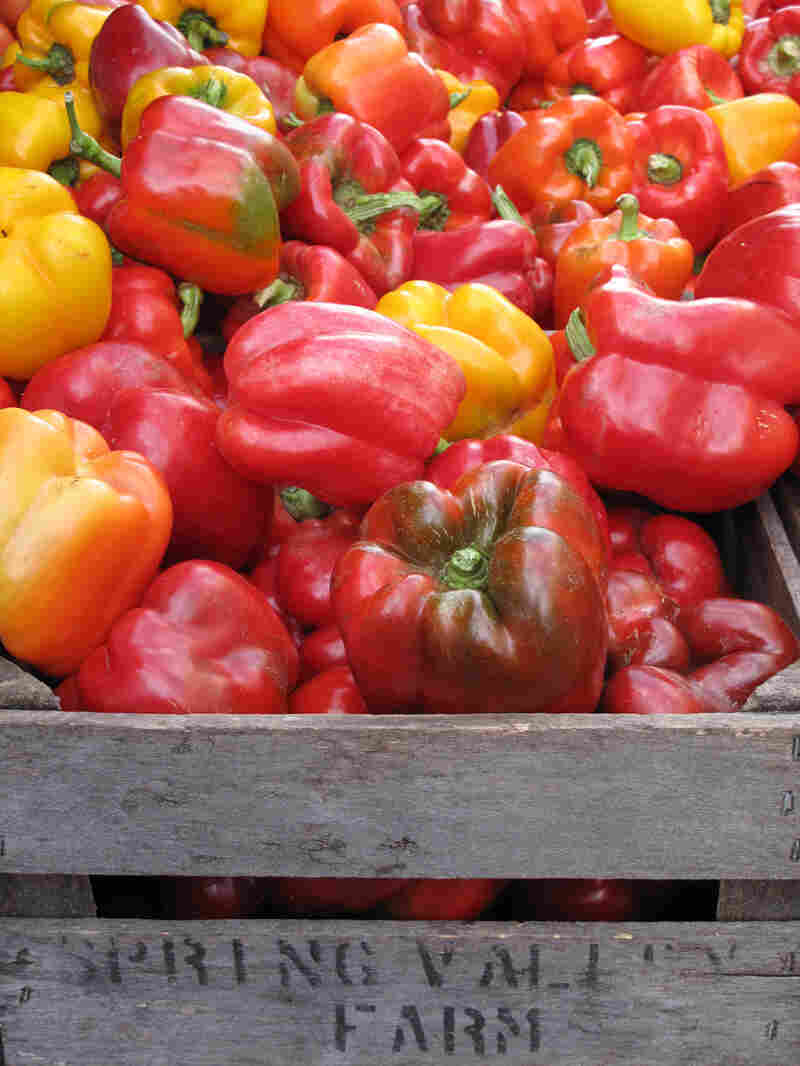 Peppers for sale at what locals are calling the White House Farmers Market, in Washington, D.C. Matt Sennewald/NPR hide caption 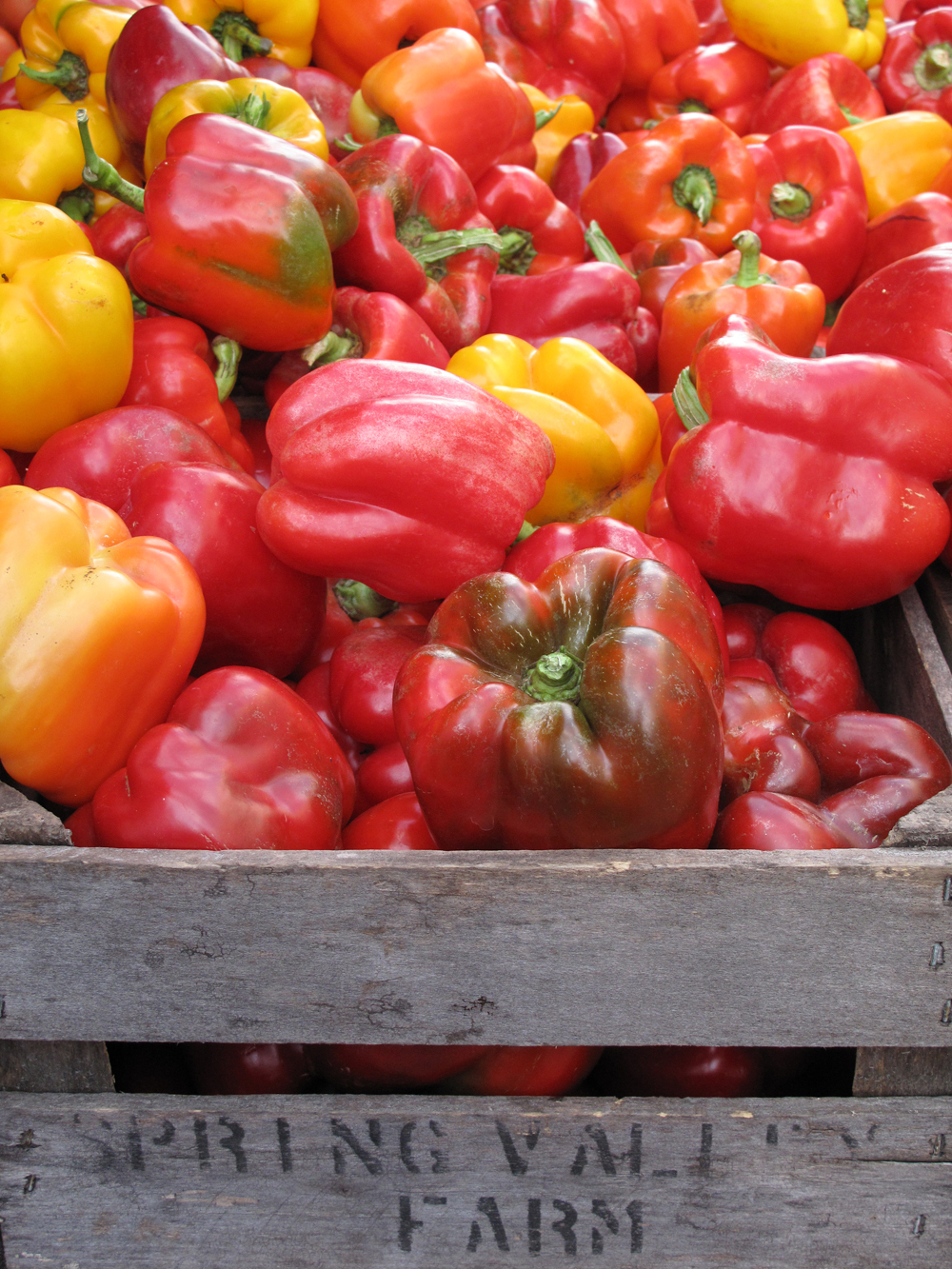 Peppers for sale at what locals are calling the White House Farmers Market, in Washington, D.C.

Just steps away from the Obama family's home is what locals are calling the White House farmers market. It's the first time since Thomas Jefferson was president that fresh produce is being sold in the open air so close to the president's house. Opened last month with a special visit from first lady Michelle Obama, the market is both an experiment and an undisguised statement.

The Obama administration wants Americans to buy more locally grown food. Problem is, the way we grow food today means that local is sometimes more expensive, so farmers markets can be cost-prohibitive for lower income families.

But the White House farmers market and a handful of others around the country are part of a pilot project. This market accepts food stamps — and those stamps are worth twice as much here as they would be elsewhere.

"I have seen women walk by with extremely expensive St. Johns suits, and then all of these great professionals pour out of these federal office buildings," says Mary Ellen Taylor, who sells vegetables from her farm in Purcellville, Va., at the market. "But along with that woman who has that suit, I also have redeemed more WIC coupons here at this market than any other market that I am in."

The New Champion Of Local Food

If the local-food revolution is quietly under way, it has a surprising new booster — the U.S. Department of Agriculture. It's behind the pilot program, which is part of Agriculture Secretary Tom Vilsack's push for small changes in the way food might be grown and distributed in the future.

"In the last five years, we saw 108,000 new farming operations get started with sales of less than $10,000," Vilsack says. "These are very small farms, but they are a very important component of our agriculture.

"There is a real opportunity for us to grow those smaller operations to mid-income-sized operations, and the way to do that is by creating opportunities locally for local production to be consumed locally."

Those are surprising words from a man who has been criticized for being too friendly with big agribusinesses like Monsanto. He was, after all, the governor of Iowa, where some say support for corn subsidies is practically required to win elective office. But Vilsack says the momentum behind local food is building.

"There is, I think, a movement in the country where people are very interested in knowing where their food comes from," he says. "As we focus on health care, and as the health care debate focuses more specifically on prevention and wellness, people are going to be exceedingly interested in fresh food and food that's nutritious."

The program the Agriculture Department has launched is called "Know Your Farmer, Know Your Food." Vilsack hopes it helps people understand where their food comes from so they can make informed choices.

"There's a disconnect between the food that we eat and our awareness of where it comes from," he says. "We think it comes from a grocery store. It doesn't. It comes from family farmers across the country working hard every day."

It's Not Just About Nutrition

Resources from the USDA have boosted the number of farmers markets across the nation by about 13 percent over the last year, Vilsack says. Even so, he adds, the effort to eat nutritiously has to go beyond farmers markets.

"It has to be more institutionalized in the sense that you have a supply chain that is reliable, and that large purchasers — large institutional purchasers — can do the same thing." Like schools, for example. "We are very interested in inserting greater opportunities for people to be able to purchase nutritious fruits and vegetables."

It's hard to imagine the large supermarket chains buying more expensive produce from local farmers when they could buy it cheaper from Mexico or California. Vilsack says the future of local produce might look more like independently owned and operated grocery stores. "Just like any other small business in a small town," he says, "if you have to pay a few pennies more, you know that's OK because that money is staying in the community."

But only a small fraction of the nearly $35 billion 2008 farm bill is going to organic, local and small farmers. Despite Vilsack's ideas of how the nation should be connecting to its food, he says it's not actually the Agriculture Department's job to change how America eats.

"I think individual consumers, individual families will make those decisions," he says. The department's role is to create a better awareness of where food comes from. "We create better opportunities for local producers to be supported by local consumers.