Accessibility links
Americans Win Nobel For Research On Aging The 2009 Nobel Prize in Physiology or Medicine has been awarded to Americans Elizabeth Blackburn, Carol Greider and Jack Szostak, who made key discoveries about how living cells age. 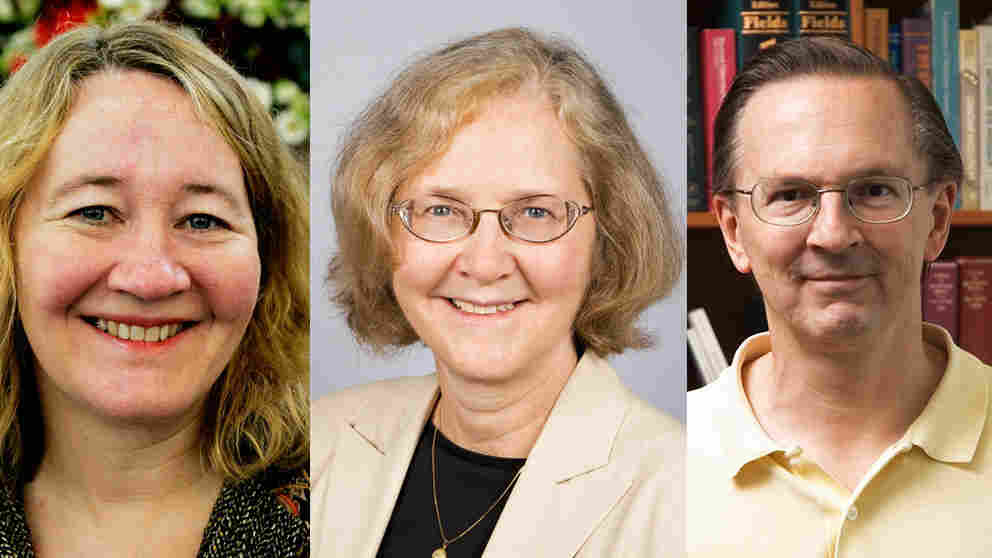 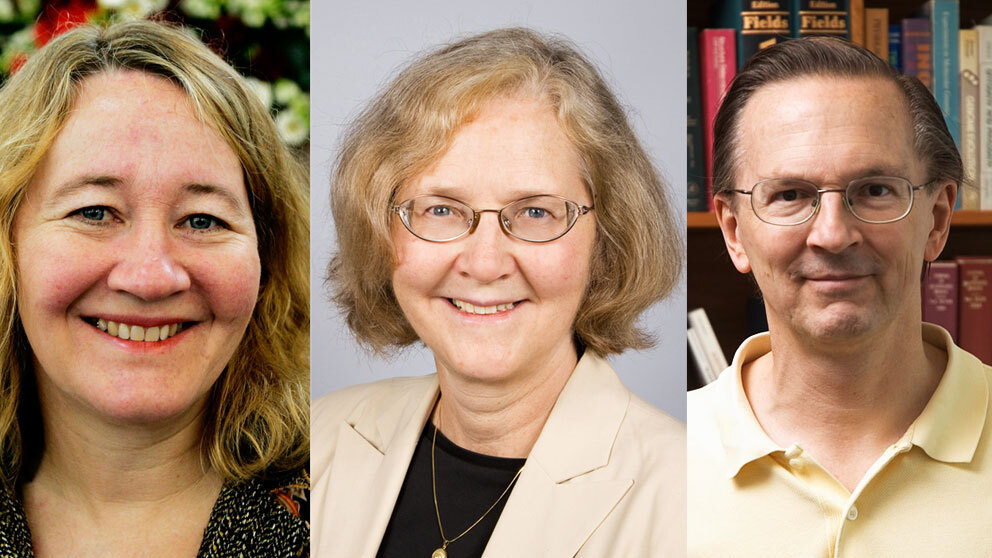 The winners of the Nobel Prize for Medicine 2009 (from left): Carol Greider, Elizabeth Blackburn and Jack W. Szostack

Three American scientists who made key discoveries about how living cells age have received the 2009 Nobel Prize in Physiology or Medicine.

The winners are Elizabeth Blackburn of the University of California, San Francisco; Carol Greider of Johns Hopkins University in Baltimore; and Jack Szostak of Massachusetts General Hospital in Boston.

The scientists all study telomeres — structures that act like caps on the ends of chromosomes and protect them when cells divide. Chromosomes are the long strands of DNA that contain a living creature's genetic code. 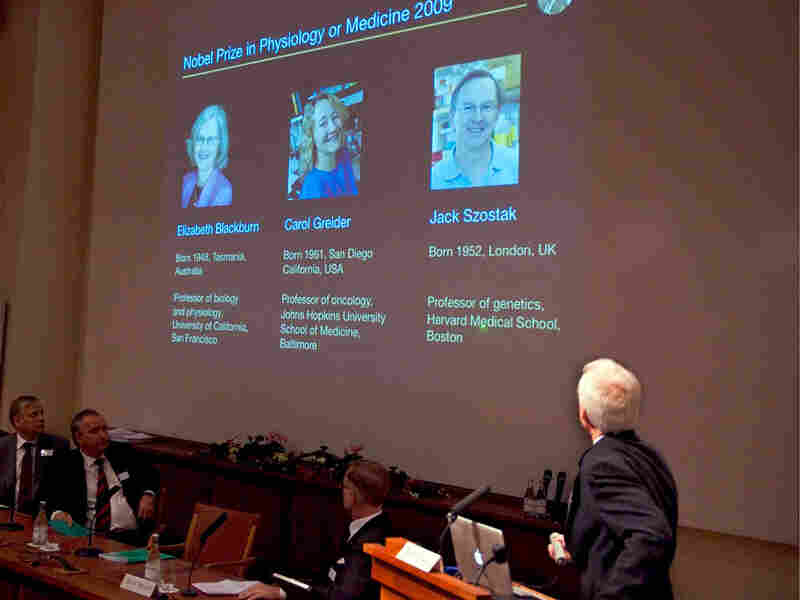 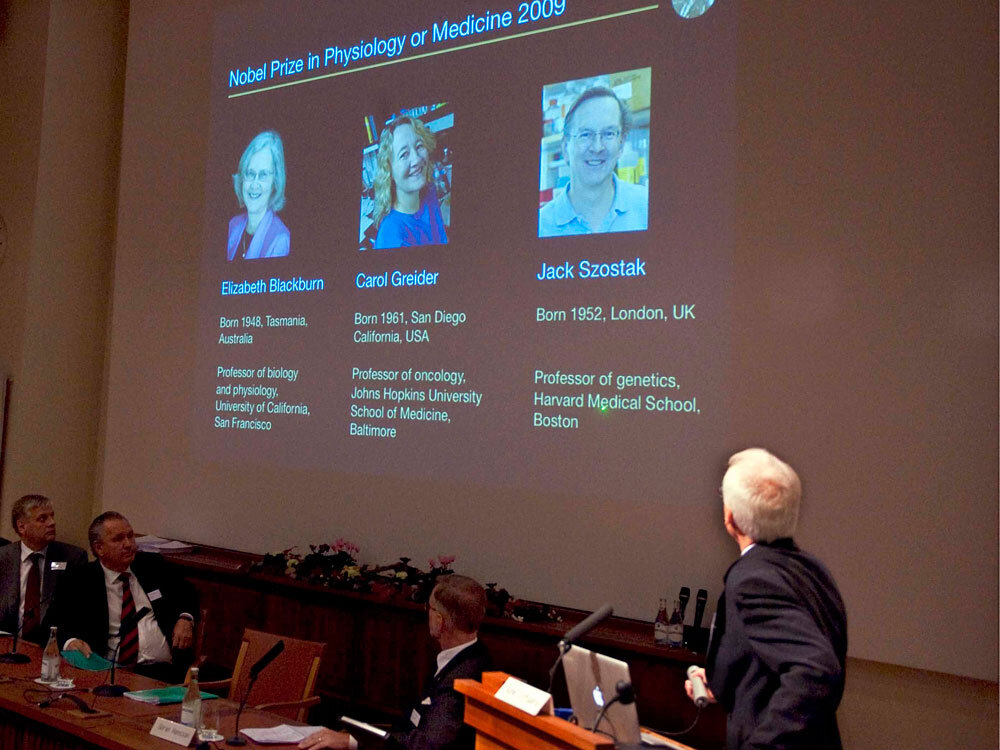 Rune Toftgard (right) presents portraits of the Nobel Prize winners for Medicine 2009 at the Nobel Forum of the Karolinska Institute in Stockholm.

Their work, together and apart, figured out how telomeres delay the aging of cells, that they are caused by the enzyme telomerase, and that they exist in all species, including humans.

These discoveries are now being used to study how behavior, such as diet or smoking, can determine the levels of telomerase in an individual and therefore influence the aging of his cells. The subject is also being looked at in terms of cancer therapy, as restricting telomeres can hinder the cell division that occurs so rapidly in cancerous tumors.

Each winner will receive one-third of the prize of about $1.4 million.

Blackburn discovered the molecular nature of telomeres, and her research lab now focuses on many different aspects of how telomeres work, including the relationship between accelerated telomere shortening and stress.

Blackburn is the first Australian woman to win Nobel Prize and only the ninth woman to win the prize for physiology or medicine in the past century.

She has outlined a mind/body connection to disease through an enzyme that plays a key role in how cells function and age. Blackburn is studying how diet, exercise and decreasing stress may reduce the risk of disease and even reverse damage due to coronary artery disease.

In a 2006 study, her group found that low levels of telomerase, the enzyme that helps keeps telomeres intact, were associated with smoking, high blood pressure, high blood sugar and pre-diabetes. Her lab is now looking at whether interventions such as a very low-calorie diet or stopping smoking may help repair the damage caused by stress.

In 2004, Blackburn was the focus of controversy over her support of "therapeutic cloning," which uses embryos to develop new treatments from stem cells. Then-President George W. Bush declined to reappoint Blackburn to his bioethics council, a political move in the eyes of many scientists and ethicists.

Blackburn, who grew up in Tasmania, was named one of Time magazine's "100 Most Influential People in the World" in 2007.

From her earliest years she was fascinated by small creatures, and that fascination led to her interest in molecular biology. She joined the UCSF faculty in 1990 and lives in San Francisco.

Greider co-discovered telomerase in 1984 while working as a graduate student with Blackburn at the University of California, Berkeley.

"What intrigues basic scientists like me is that anytime we do a series of experiments, there are going to be three or four new questions that come up when you think you've answered one. Our approach shows that while you can do research that tries to answer specific questions about a disease, you can also just follow your nose," she said after receiving an award for her work in 2006.

Greider's father was a physicist at the University of California, Davis, and she credits him with influencing her to pursue a career in academic science.

While working at McMaster University in 1990, Greider realized that telomere length is related to cellular aging and found that telomerase is activated in cancer cells. That allows the cells to continue to grow and divide. Her work with mice and human cells has confirmed that inhibiting telomerase can limit cancer cells and tumor production.

He was born in England but grew up in Canada. Szostak was fascinated with learning more about how cells work, which led to discoveries that telomeres in human cells play crucial roles in both cancer and aging.

Szostak's early work with genetics led to key discoveries about telomeres. His interest in telomeres was piqued when he heard of Blackburn's work in 1980. The two then performed an experiment that proved that telomere DNA is present in most plants and animals as a fundamental mechanism.

Szostak is also credited with creating the first yeast artificial chromosome, which led scientists to map the location of genes in mammals and develop techniques for manipulating genes, according to the Howard Hughes Medical Institute, where he also holds the title of HHMI investigator.

In recent years, Szostak's research has focused on understanding how complex chemicals come together to form simple organisms that can reproduce and evolve. According to Massachusetts General Hospital, the Szostak lab is using the principle of molecular evolution as a tool for drug discovery to treat different types of cancer.

Learn More About Each Of The Prize-Winners Here