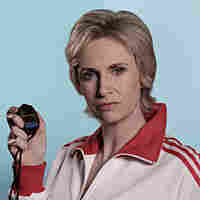 You probably know Jane Lynch, who plays the brilliantly evil cheerleading coach Sue Sylvester on the so-happy-it-hurts Fox show Glee. She's also appeared in many (many, many) other projects: Best In Show, The 40-Year-Old Virgin, Julie & Julia, A Mighty Wind ... we could go on and on. We really could.

She came in to NPR West for a conversation with All Things Considered co-host Melissa Block, and we were so excited to hear she'd be around that we asked if she wouldn't mind answering what we're calling Five Unlikely Questions.

Who would win in a knock-down cage match between a cheerleading squad and a show choir? And what fate should befall the losers afterward?

The cheerleaders would squash the show choir by stomping on their windpipes.This would result in a bunch of shallow-breathing singers who would soon form vocal nodes. The Glee Club would be hobbled.

Given Glee's structure, and your hopes to eventually get to sing on the show, we have to ask: What's the best song to use as the soundtrack in a plot to destroy your enemies?

"Rose's Turn" from Gypsy. Key phrases: "Thanks a lot and out with the garbage, they take bows and you're battin' zero." And "Mama's gotta let go!!!"

If all the characters you've played were running for president against each other, which one would you vote for?

I would probably vote for Laurie Bohner of A Mighty Wind. Pornography and good old-fashioned American folk-singin' would walk hand in hand. And then I'd have to leave the country.

In the last year, you've starred on series called Glee and Party Down. What's behind your sudden interest in relentlessly upbeat titles?

We're in a recession, people. "Lighten up" is what that's saying.

Your Internet Movie Database entry shows about 70 credits in the last five years. That's roughly one new credit every three to four weeks. Do you have a clone?

Yes. Glenn Close does roughly three-fifths of my work.

Bonus round: You told Melissa Block that you're happy to "be home" on the Glee set, to have a long-term gig and a trailer to settle into, complete with a pillow and a candle you brought in yourself. Which leads us to wonder: What would Sue Sylvester say about your decorating taste? And who would she hire to pretty up that trailer?

Sue would have Jack LaLanne design a mini-gym around a 75-pound medicine ball. No candles or pillows please -- too damn sissy.