Accessibility links
Narcocorridos: Ballads Of The Mexican Cartels The news of Mexico's bloody cartel war is reflected in a controversial folk-music genre called narcocorridos, or drug ballads. They're like journalism put to song — telling stories of drug lords, arrests, shootouts, daring operations and betrayals. But, like the cartel war itself, writing corridos about drug traffickers can be risky business. 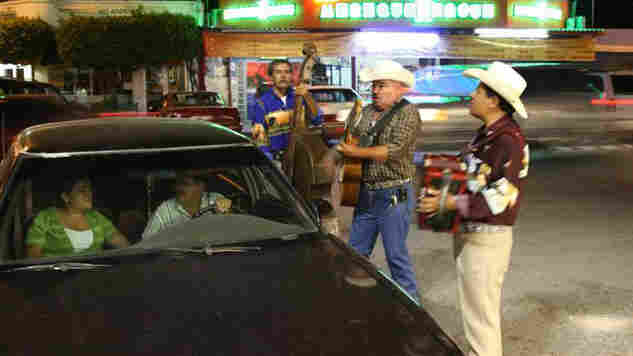 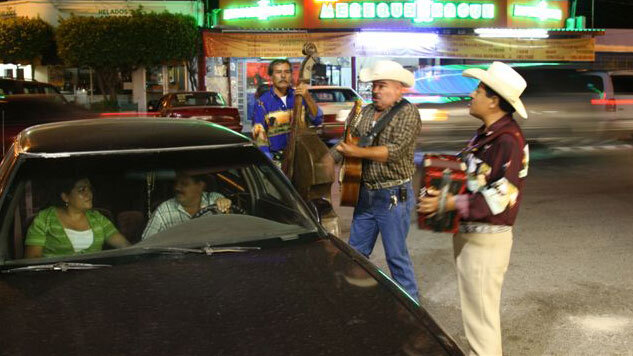 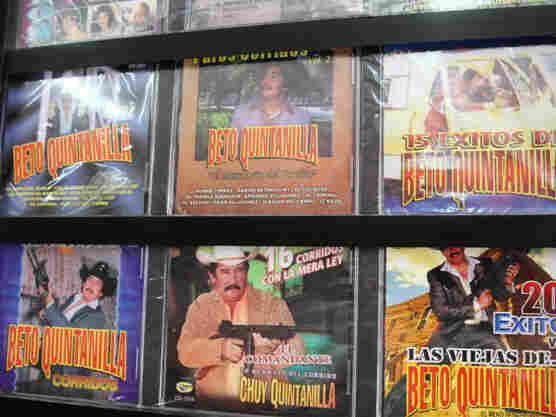 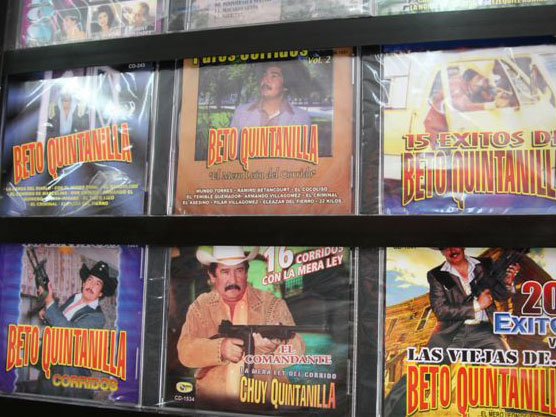 CDs featuring narcocorridos are popular sellers at this record store in Reynosa, Mexico.

The news of Mexico's bloody cartel war is reflected in a controversial folk-music genre called narcocorridos, or drug ballads. They're like journalism put to song — telling stories of drug lords, arrests, shootouts, daring operations and betrayals.

It's a slow night on Calle del Taco in the border town of Reynosa, Mexico. Lovers sit in their vehicles eating tacos and sipping bottles of cold beer while the trios warm up: musicians with scarred instruments, wearing cowboy shirts buttoned tight across paunches and open at the top, machismo-style.

"In San Jose, Costa Rica, they took him prisoner, now the whole world knows how the ballad begins of Rafael Caro Quintero," the musicians croon in harmony. They're singing an older narcocorrido about the 1985 arrest of a Mexican druglord who is also under indictment in the U.S. for the torture and murder of DEA agent Enrique "Kiki" Camarena in Mexico.

The composer of "The Ballad of Caro Quintero" is one of Mexico's most prolific corridistas: Reynaldo "El Gallero" Martinez — a 71-year-old fighting-cock breeder with a pencil mustache and a gambler's grin. He's with us tonight, listening approvingly to this rendition of one of his most famous corridos.

"The kids of Reynosa and Matamoros and many parts of Mexico learn the words to a corrido before they learn the National Anthem," Martinez says.

Everything is well under control, be aware senores, Now that Mr. Tony Tormenta is in charge

All the big shots get together to choose the best man, But if it's necessary they also know how to use their weapons

He may be overstating it, but it's undeniable that the popularity of narcocorridos has tracked the spiraling cartel violence in Mexico. More than 13,500 people have been killed in drug-related violence since President Felipe Calderon took office in 2006.

Standing nearby, guitarist Agustin Llamas says that if they don't sing narcocorridos out here on the Calle del Taco, they won't make any money.

"The people say, 'Sing me a corrido about narcos with bullets and marijuana,' " Llamas says. "They don't want a bolero. They want a narcocorrido. That's how it is here on the border."

Corridos have chronicled life and death in Mexico since the time of the Mexican Revolution. Narcocorridos first came into vogue in the 1970s, then exploded in the 1990s. The more the cartels make news, it seems, the more songs there are about them.

To make his point, Reynaldo Martinez took us to a music store on a busy downtown street in Reynosa. The manager pointed out her best-selling CDs.

On the covers are musicians in cowboy attire gripping AK-47s — mimicking the traffickers they sing about. Afterwards, Martinez tries to explain Mexicans' enduring fascination with stories about smugglers. He compares the popularity of the narcocorridos with that of bullfights.

"They always want to see the bull gore the matador," Martinez says. "We always want the weak one to win. And that's how we see the narco-traffickers."

But now that drug mafias like the Sinaloans, La Familia and the Zetas have grown more powerful than the police or even the army, they're not the underdogs anymore.

The romanticizing of traffickers and the glorification of the drug trade has irritated the Mexican government to the point that narcocorridos are banned from the Mexican airwaves. They're considered a bad influence on young people.

And so a curious flip-flop has occurred.

The program Killer Corridos airs each afternoon on Radio Papalote in Edinburg, Texas, about 20 miles north of the Rio Grande. It's one of the stations along the U.S. side of the border that broadcasts prohibited corridos deep into Mexico. It's the flip side of the famous border blasters that thrived in Mexican border towns from the 1930s through the '80s. High-powered transmitters broadcast preachers, hucksters and rock 'n' roll into the American heartland.

Disc jockey Jose Jaime Zavala says it's dicey playing certain types of corridos — for example, those that mention the name of a cartel or a particular trafficker. A rival cartel might take offense.

"There's one called Suicide Bodyguards that tells of the Zetas," Zavala says. "This is very dangerous to play on the radio, because you don't know if someone is going to hear it, and there will be reprisals. The station owner told me to try to avoid strong corridos, and so as a disc jockey I try to avoid them."

Though narcocorridos have created hits for dozens of bands throughout Mexico, they create something of an occupational hazard.

More than a dozen Mexican musicians were murdered between 2006 and 2008; motives are shadowy, but it's suspected that some were killed for what they sang. One was a 25-year-old banda star from Sinaloa named Valentin Elizalde. He was machine-gunned in his car as he left a concert in Reynosa three years ago; people suspect that one of his songs somehow offended the Gulf Cartel, which controls this territory.

The murder of Elizalde sent a chill through the narcocorrido music business. Martin Gamboa, an up-and-coming singer who lives in Matamoros, says musicians have to be careful these days.

"Many times, you can't put certain words in a corrido," he says. "What you have to do is use nuance, so that you don't offend anybody." Gamboa pauses. "And if any of my corridos has offended anyone, I ask their pardon."

If you do put the name of a powerful drug lord in your song, you'd better be somebody like Chuy Quintanilla. He's a blustery, 58-year-old songster from Reynosa whose brother is the late narcocorrido superstar Beto Quintanilla. Perhaps Chuy's musical bravado has something to do with the fact that he used to be a federal judicial police commander, a position in Mexico that is ascribed godlike powers. In the current climate of caution, Chuy belts out corridos other artists wouldn't whisper.

For instance, his "Corrido of Tony Tormenta" tells the story of Antonio "Tony Tormenta" Cardenas — the current chief of the murderous Gulf Cartel. Yet Chuy doesn't like calling them narcocorridos.

"Let's do away with the term, narcocorrido; it's vulgar," he says. "A narco is a person who's guilty of a crime that you or I can't ascertain. Only a judge can say. No, Chuy Quintanilla writes corridos about current events."

Time will tell. Tony Tormenta is currently on Mexico's most wanted list and under indictment by the DEA. 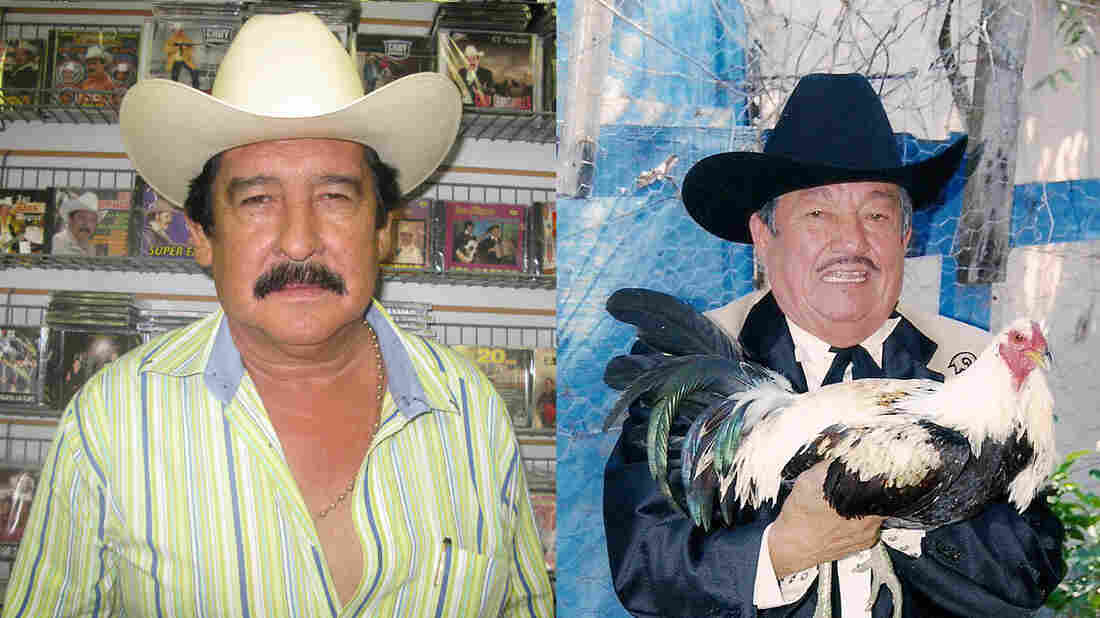 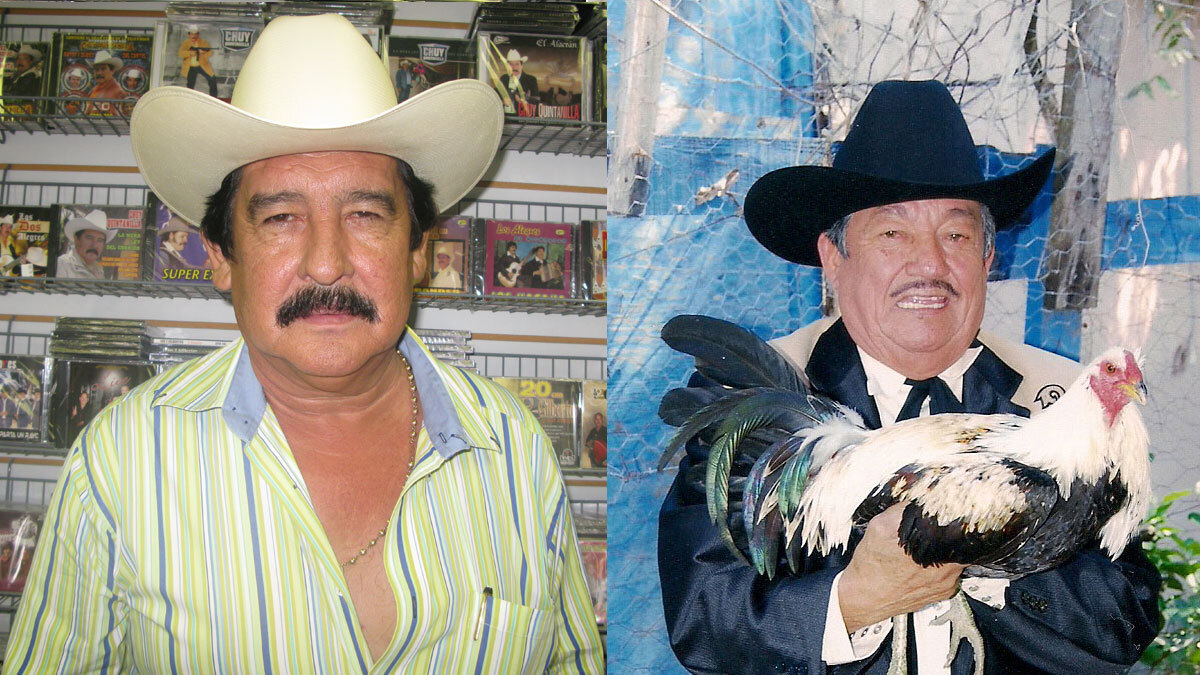 Left: Chuy Quintanilla, a former federal police commander and current narcocorrido singer, stands in a record store in McAllen, Texas. Right: Reynaldo "The Roosterman" Martinez, one of Mexico's most prolific corrido composers, has 270 ballads to his name.

Advisory: The subject matter of the videos discussed in this piece may not be suitable for all ages.

In recent years, YouTube has become the bulletin board and billboard for Mexican drug cartels seeking to threaten rivals, brag of their exploits and recruit new members. Just type "zetas," "sinaloa cartel," or "la familia michoacana" into the YouTube search window to see how these drug mafias have adeptly appropriated social media.

Often to the accompaniment of a narcocorrido, pictures flash on the screen of murdered rivals, hooded policemen, shiny smuggling vehicles, bales of marijuana, and stacks of cash. But the videos can also be gruesome, showing real-time executions with pistols or decapitations by ligatures. Under YouTube's Inappropriate Content guidelines, users can flag violent or graphic material and YouTube monitors usually remove the objectionable images within minutes. But the pictures often reappear soon afterward.

The use of the Internet by Mexican narcotics cartels is directly modeled on how jihadist terrorists use anti-western Web sites. "They'll do videos of them executing a guy, something like you see in al-Qaida," said Roberto Garcia, a veteran police detective in Laredo, Texas. Savvy narcotics investigators have learned to keep up with the drug cartels on YouTube just as the FBI uses the Internet to track the activities of terrorist groups.

"This is an amazing source of information for us," Garcia says. "It keeps us up to date, verifies stuff we already know, and gives information on murder suspects we're looking for that have already been executed."

Sitting at his supervisor's desk in police headquarters, Garcia took me on a tour through the dark world of YouTube cartel videos. He clicked on a video titled "Matando Zetas," (Killing Zetas).

"Here are four shirtless guys who've been beaten," the detective says, looking at the image of four husky, hand-cuffed and terrified men kneeling on the floor, surrounded by hooded men with assault rifles. "It looks like somebody taped Hefty trash bags on the wall to prevent blood from spilling all over the place. They're being questioned. They've been tortured. They're making 'em explain who they are, who they work for. They say they work for Zetas."

The video appears to have been posted by someone who sympathizes with the Sinaloa Cartel, which at various times and in various places has been at war with Los Zetas, a criminal organization that operates in the Mexican border state of Tamaulipas.

"It's to put terror on rival gang members, to say, 'This is what happens if we catch you,'" he adds.

Garcia clicks on another video, this one of a large recruitment banner draped boldly across a public highway overpass in Ciudad Juarez. Garcia squints to read the wording.

"Grupo Zetas wants you, military or ex-military. We'll offer you good pay, food and attention to your family." Then a squad of Mexican soldiers can be seen cutting the banner down.

But can the videos be completely trusted?

"YouTube can be useful a tool for gathering intelligence about what's going on with the cartels, who's been killed, who's on a hit list," says Stephen Meiners, until recently a Latin American analyst for Stratfor, a global intelligence company based in Austin. "The problem is the videos are full of propaganda." he adds, "They can also be a forum for disinformation. They know the DEA and Mexican federal police are looking at You Tube, too." >br />