Accessibility links
Silenced By Violence, Texas Club Nurtured Misfit Music When you think of San Antonio, you might be inclined to "Remember the Alamo." But there's a lesser-known city landmark, a cinderblock building that was once Taco Land, the loudly beating heart of San Antonio's underground music scene. 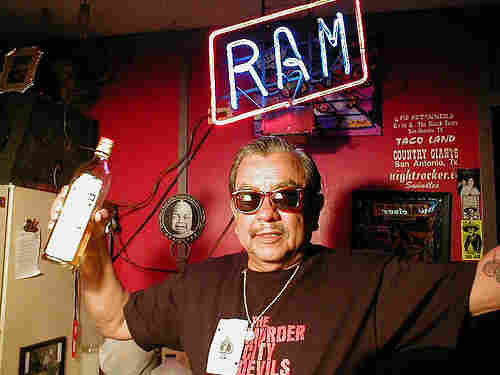 Taco Land owner Ramiro Ayala, or "Ram," as everybody called him, opened the door to anyone who wanted to play. Courtesy Erik Sanden hide caption 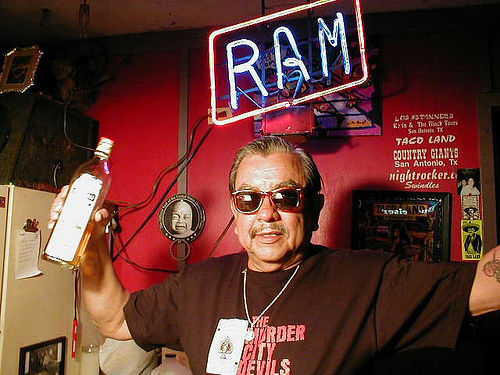 Taco Land owner Ramiro Ayala, or "Ram," as everybody called him, opened the door to anyone who wanted to play.

When you think of San Antonio, you might be inclined to "Remember the Alamo." But there's a lesser-known city landmark — a cinderblock building that's vacant now, silenced by a violent crime — that was once the loudly beating heart of San Antonio's underground music scene.

Long before the Dead Milkmen wrote a song about it, Taco Land was just an after-work beer joint. Shift workers from the Pearl Brewery and folks from the neighborhood were shooting pool and drinking cheap, cold beer.

But around 1980, a young cowpunk band called the Hickoids played what many believe was the first underground punk show at Taco Land.

Part of the punk ideal was finding authenticity, and this place was unpolished enough and foreign enough to those kids to fit that bill — not to mention it was full of cold beer.

If you could go back, where would you go? Tell us about the places you've lost but haven't forgotten. Add your stories, photos, videos and audio messages to the hundreds already offered by listeners like you.

The Place + Memory Project celebrates the landmarks of your past. Help us by adding your memories to our online map and visit the places remembered by others at placeandmemory.org.

The Hickoids weren't the only ones who found something new that night. After running the bar for 15 years, Taco Land's owner, Ramiro Ayala — or "Ram," as everybody called him — connected with something about the freedom these kids were trying to find, and their recklessness.

He opened the door to anyone who wanted to play.

Taco Land quickly became a sanctuary for all the bands in San Antonio that didn't fit in anywhere else. Ram became their patron saint.

"He allowed that music to be here which was more underground --- punk, you know, surfer or rockabilly, everything that most of the clubs wouldn't allow," long-time customer Bell Solloa says.

"They'd say, 'What the hell are you doing, bringing these bands in here?'" Jeff Smith of the Hickoids remembers. "And [Ram] goes, 'Hey man, they're here to rock and roll. And if you don't like it, you can go sit outside or you can go somewhere else.'"

Some regulars left. Some stayed. And the bands kept coming.

Ram treated everyone the same, which meant occasionally yelling and kicking you out if you didn't follow Taco Land's golden rule, which was basically don't be mean to anybody and have a great time.

Taco Land became one of those bars where people who would otherwise never know each other became friends.

"If you wanted to hear the band, you open the front door," Phil Luna of the S- - - City Dreamgirls says. "You're immediately being pushed out by the crowd on the inside. You'd fight your way to the bar and you just didn't care. You knew everybody that you rubbed into. So it was just a hug to the right and a hug to the left and a butt smack and a kiss, and take a shot of this," Luna laughs. "I don't remember the paneling or the posters. I remember nakedness and then seeing things very close up in a very blurry way. Yeah."

Half of going to Taco Land was going to see Ram. He had tons of sayings and everyone there latched onto them. Like when bands were playing, he'd yell, "'One more time for the March of Dimes!'" Santiago Garcia remembers. "Ram was definitely a cool cat."

Garcia is a San Antonio poet. "[Ram] seemed to me a little bit Pachuco-inspired. He had the hint of a slicked-back hairdo. He wore dark shades, at all times. He had this little mustache. He was an iconic man."

Ram's favorite expression can't be repeated on the radio. "I think the nice way you can say that is, 'Turn it up, wussy!'" Garcia says. "I think he was just telling you to take it to another level.

"He was a very funny guy and I think he was just picking on you, trying to hit the chip on your shoulder or make you loosen up. And if you went in there and took that as a criticism, you didn't get it."

Ram said it best in a 1996 documentary about Taco Land: "Hey, we enjoy ourselves. We play, we drink together, you know? We might not make no money, but, hey man, we have a good time. You [can't] buy good time. I don't care where you go. You just can't buy it. I mean, the good time is here."

Taco Land gained a sort of underground notoriety. National acts like Yo La Tengo and The Minutemen would book occasional shows there. But the heart of Taco Land was always local music and a family of loyal customers.

Over the years, there were a series of people who formally and informally worked at Taco Land who Ram took under his wing. Denise Koger was one of those folks. She worked for Ram for five years, and she was there the night that everything ended at Taco Land.

Koger was returning from the back when she saw two guys talking with Ram at the bar.

"I heard Ram say his last words," she remembers. "'F you.' And then boom! The guy just shot him." 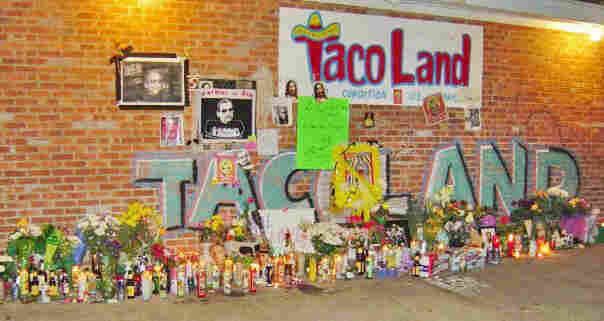 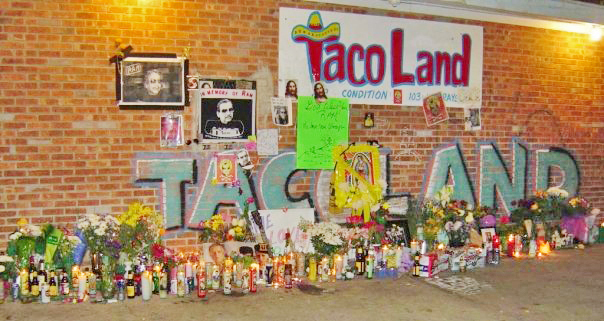 The two men robbed the bar, shooting Koger and another co-worker before they left.

"And you know, the jukebox is blaring," Koger says. "It's playing, like ... Mexican music real loud ... there's the smell of gunfire and there's blood everywhere, money all over the floor. And then, I kinda dragged myself around to Ram. And he was laying there. He looked perfectly handsome. He wasn't moving but his sunglasses were kind of askew. And I put them back on his face for him. I've seen a lot of things in my life, and I've known a lot of different type of people, but never in my wildest dreams could I ever see anyone hurting a person like Ram."

Ram Ayala died that night. He was 72 and he'd been running Taco Land for 40 years. After the shooting, Tacoland never reopened. It's been four years and the building is still there, like a shrine — or a ruin.

"It's weird because, in the heyday, it was much bigger than it is now," Erik Sanden from the band Buttercup says. "It's shrunk since.

"I don't know if this happens to other spaces, but especially you've got such a strong personality, like Ram, and then that soul leaves, it just leaves a big space."

"Tacoland was a movie," Luna says. "It had a beginning and it had an end. It had a soundtrack, and it had a crazy story line that went in and out of everybody's lives. I'm not sure it really happened." He laughs.

Place + Memory is produced by Shea Shackelford and Jennifer Deer of Big Shed Audio. It's part of the Maker's Quest, a project of the Associates of Independents in Radio and the Corporation for Public Broadcasting.