Accessibility links
Octopalooza: Eight Arms Three Ways A full-grown octopus is a lot to take on in the kitchen, but the babies are tender and unintimidating — and can be had for a very persuasive price. Cook them fast and hot, or cook them low and slow. 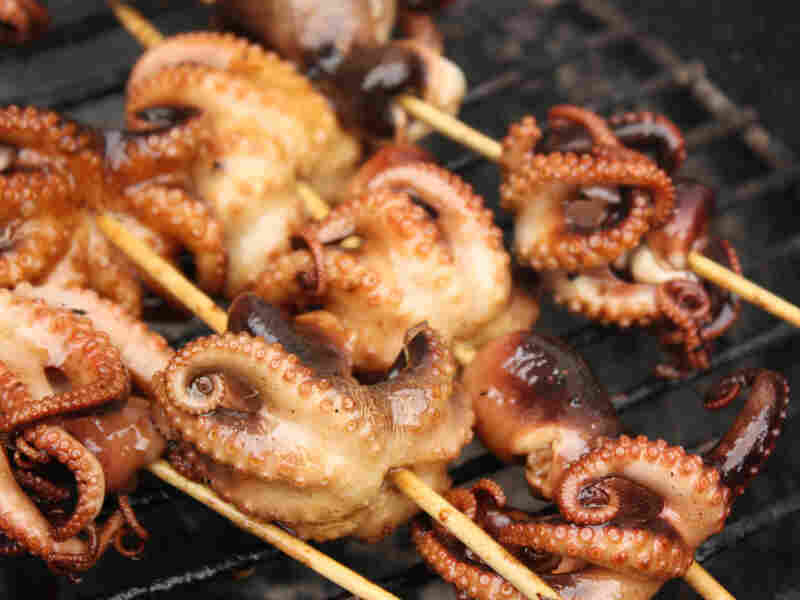 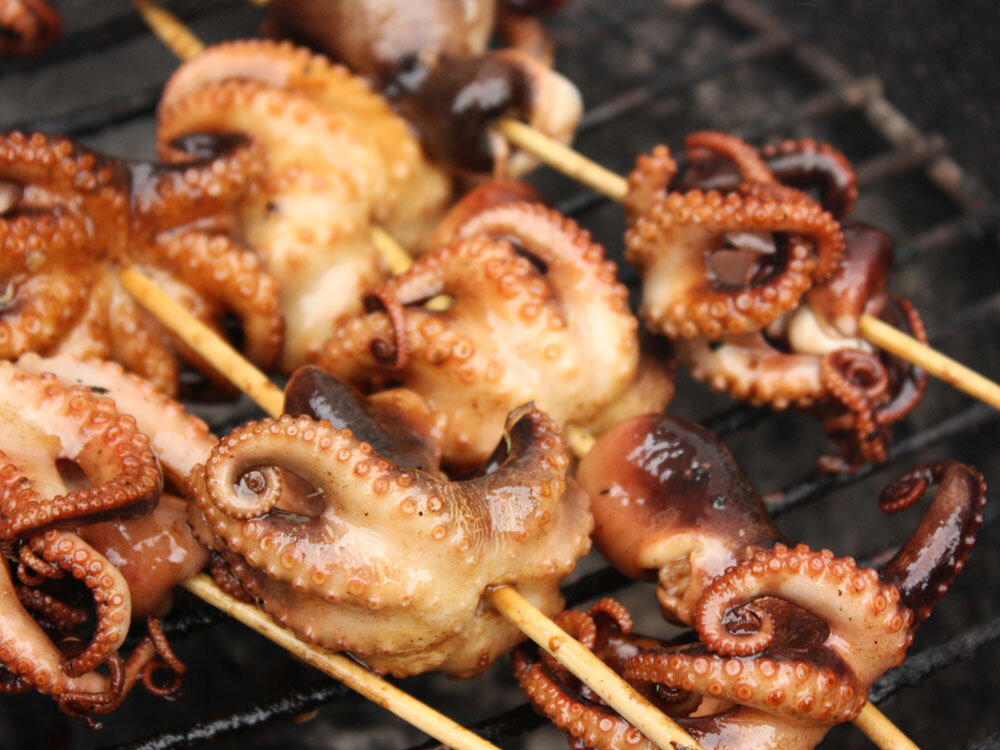 The enlightened Buddhist entity known as Avalokiteshvara has 1,000 arms, the better to relieve suffering. Kali, goddess of change, has 10, the better to create and destroy. As a busy parent, I would settle for merely eight — which brings me to the octopus.

It's said the octopus is the most intelligent of all invertebrates (a status I previously thought belonged to one of my old bosses). Yet what does it do with its formidable brainpower and multiple arms, other than solve mazes and open jars? We don't really know. The motives of the octopus, unlike those of Kali and Avalokiteshvara, are mysterious. And what do we do when we come across something we don't understand? We eat it, which is, in a nutshell, how natural selection works.

In the moral sphere, we may not know much about how the octopus behaves. But in the pot, it behaves very much like squid. As with squid, you have two choices when it comes to octopus: cook it fast and hot, or cook it low and slow. Anything in between, and you have something that tastes and feels very much like a rubber tire, minus the groovy tread, and the traction on snow and ice.

There are many ways to tenderize a full-grown octopus before choosing one of those preparations. The most picturesque is probably the most ancient — dashing it repeatedly against the rocks until the cartilage starts to break down. It's not for everyone. Even if you're not combat-shy in the kitchen, a 3- or 4-pound octopus can be as daunting as anything you ever ran across in biology class. For one thing, its pale cartilage and rose-tinged suction cups vaguely resemble a kitchen cleaning appliance that's forgotten its function. It's as unwieldy as a vacuum hose, and several times slimier.

My favorite ever baby octopus was served (and still is, far as I know) at Uncle Nick's Greek Cuisine in New York. It was, if I recall, barely charred on the edges, vinegary, a little sweet. With a little glass of rough red wine, I thought it was about the best way to start a date.

But the size, the scariness and the ritual bashing with its brutal overtones can all be avoided if you go with a baby octopus, which is tender and unintimidating — and can be had for a very persuasive $4.49 per frozen pound. Sometimes they even come pre-cleaned, which is what you want. (Otherwise, you have to remove the guts, the eyes and the beak. If you tend to anthropomorphize your food, or if deveining shrimp gives you the heebie-jeebies, stay clear of uncleaned octopus.)

T. Susan Chang is a New England-based freelance writer and a former Kellogg Food and Society Policy Fellow. She also is the regular cookbook reviewer for The Boston Globe, and her articles on cooking, gardening and nutrition appear in a variety of national and regional publications. You can find more information at her Web site, tsusanchang.com.

My favorite ever baby octopus was served (and still is, far as I know) at Uncle Nick's Greek Cuisine in New York. It was, if I recall, barely charred on the edges, vinegary, a little sweet. With a little glass of rough red wine, I thought it was about the best way to start a date. According to Uncle Nick's kitchen, you just put some balsamic vinegar and oil on it, and grill it. But we all know things are never as simple as they seem.

I've found with the balsamic vinegar preparation that it's best to blanch the octopus in a bit of boiling water first, then give it a good long marinade before trying to grill it. If you like to complicate things, you could give the octopus a long seething with olive oil in the oven, followed by stewing in red wine and tomatoes. If you like them simpler, you could just go with the lemon and oil grilled octopus, the way they do in the kids' cookbook I recently tested.

Either way, watch the cooking time vigilantly, and don't be afraid to test. If you're going for fast and hot octopus, it's easy to overcook, but it's also possible to undercook. This is what happened to me in the crazy press to get dinner on the table the other night. I rushed the octopus onto a platter and hauled it inside, where my son, who is nothing if not a pusher of boundaries, had seized upon the eight-armed novelties before my own two arms could pour the milk, find the napkins and locate a beer.

If overdone octopus is tough and chewy, underdone octopus is stretchy, durable and quite strong-tasting. Noah's jaws slowly ground to a halt, and the acquisitive gleam in his eyes faded to a worried frown. After several angst-filled moments, the boy who, like a young sea god, demands the eyes from every fish served in his house, finally managed: "It has ... too much ... flavor."

If Octopus 1 was not a success, Octopus 2 (blanched and grilled), 3 (marinated and grilled) and 4 (stewed) made up for it. I began to foresee the octopus' transition from deep-sea enigma to weeknight snack.

But the beauty and mystery of the octopus remained uppermost in my mind, along with that guilty sense of stewardship familiar to all carnivores. My appetite could certainly accommodate a weekly rendezvous with an octopus. But could the octopus?

A little research revealed that the common octopus is one of those species whose habitat is sometimes badly overfished by trawler nets. There are sustainable octopus fisheries, but it's often hard to trace your source. And surely even 10-armed Kali would hesitate to destroy the future of an endangered species. I wish I didn't know it, but now that I do, the octopus will have to join monkfish in that circle of species I eat avidly, thoughtfully and not terribly often.

So when you're enjoying octopus, use your nonfork arm to pick up the phone. Ask your supplier to be on the lookout for sustainable octopus from Hawaii or the Gulf of California. And with the other arms you don't have, count the many blessings that come from the sea. I guarantee you, eight won't be enough.

It's preferable to get pre-cleaned octopus, especially if you're squeamish. But if you can't, and you aren't, they are not that hard to clean.

First, cut a good-sized slit in the head. The guts are attached to one side with a strand of pale tissue; cut that, and they'll all come out at once.

Next, the eyes: You'll see them on one side of the head, barely protruding just above the tentacles. Press the octopus against the cutting board so that the eyes are facing toward your knife hand, and the skin is stretched taut. Cut a slit near each eye, press firmly on the octopus, and the eyes will protrude enough for you to cut them out with your knife.

Finally, the beak: Pull back the tentacles so that they gather up around the head. Lay the octopus sideways against your cutting board, place a finger inside the slit in the head, and press from the inside against the center spot where the tentacles originate. On the outside, you'll see a small black beak emerge from the center point. Cut it away with the tip of your knife, and you're done.

If all of this is way too much to face, just cut off the heads entirely and use the tentacles by themselves.

Grilled Baby Octopus In The Manner Of Uncle Nick's

Something about the dark, sweet, mild astringency of balsamic vinegar pairs so beautifully with grilled octopus. Be sure to baste constantly with the balsamic marinade while you grill, so you can get the most out of it. 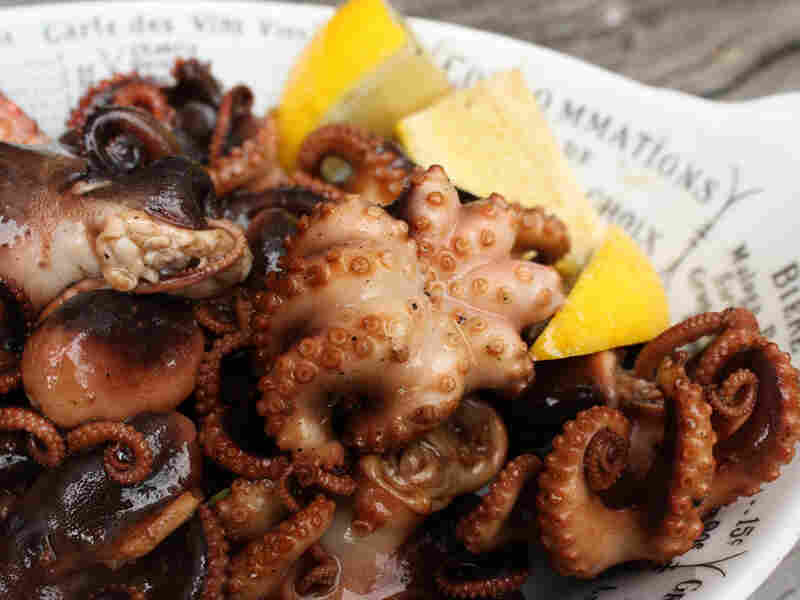 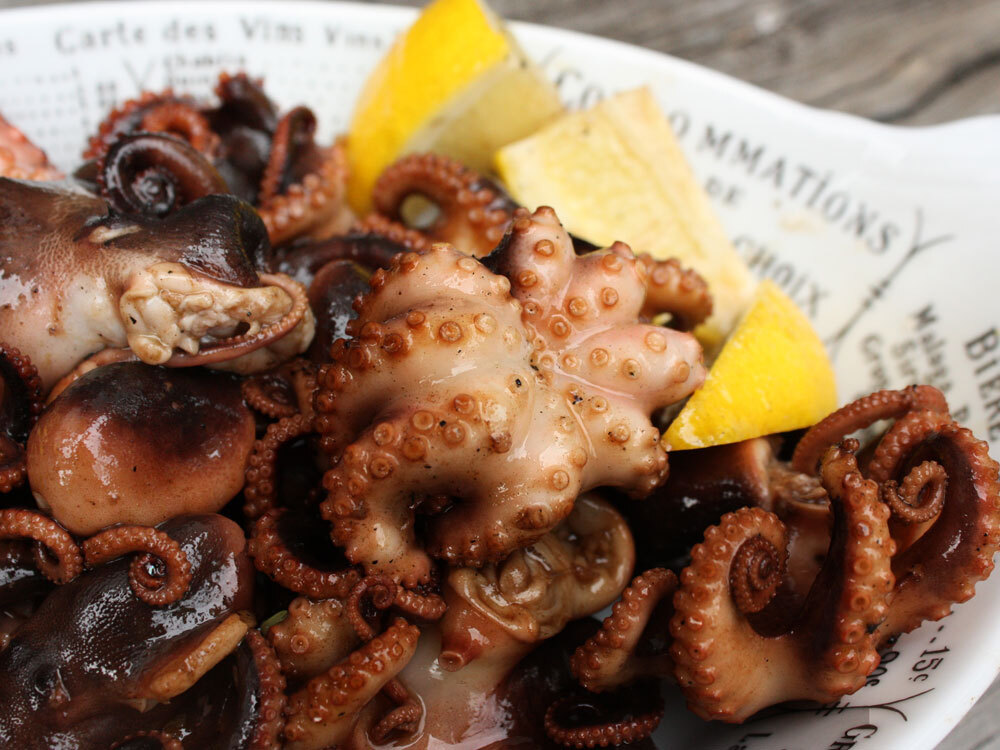 Makes 4 servings as an appetizer

Place the octopus in a large heatproof bowl. Bring water to a rolling boil and pour over the octopus (the tentacles will curl, and the skin will become opaque). Let stand for 90 seconds; drain immediately. Transfer the drained octopus to the bag of marinade. Remove to the refrigerator to marinate at least 4 hours, preferably more.

Meanwhile, soak 6 wooden skewers in a sheet pan of water for at least a half-hour. Preheat a gas or charcoal grill. When the grill is very hot, skewer the octopuses (2 or 3 to a skewer) and pour the remaining marinade into a small bowl.

Grill the octopuses until just charring at the tips, about 3 minutes a side, while basting with the remaining marinade. Squeeze a bit of lemon over the top if you like.

This recipe is adapted and slightly simplified from a technique given in Rick Stein's Complete Seafood (Wiley 2004). The trickiest part, which isn't terribly tricky, is making sure the octopus is cooked enough to be tender. Test carefully with the tip of a paring knife or fork until the flesh of the tentacles offers little resistance. 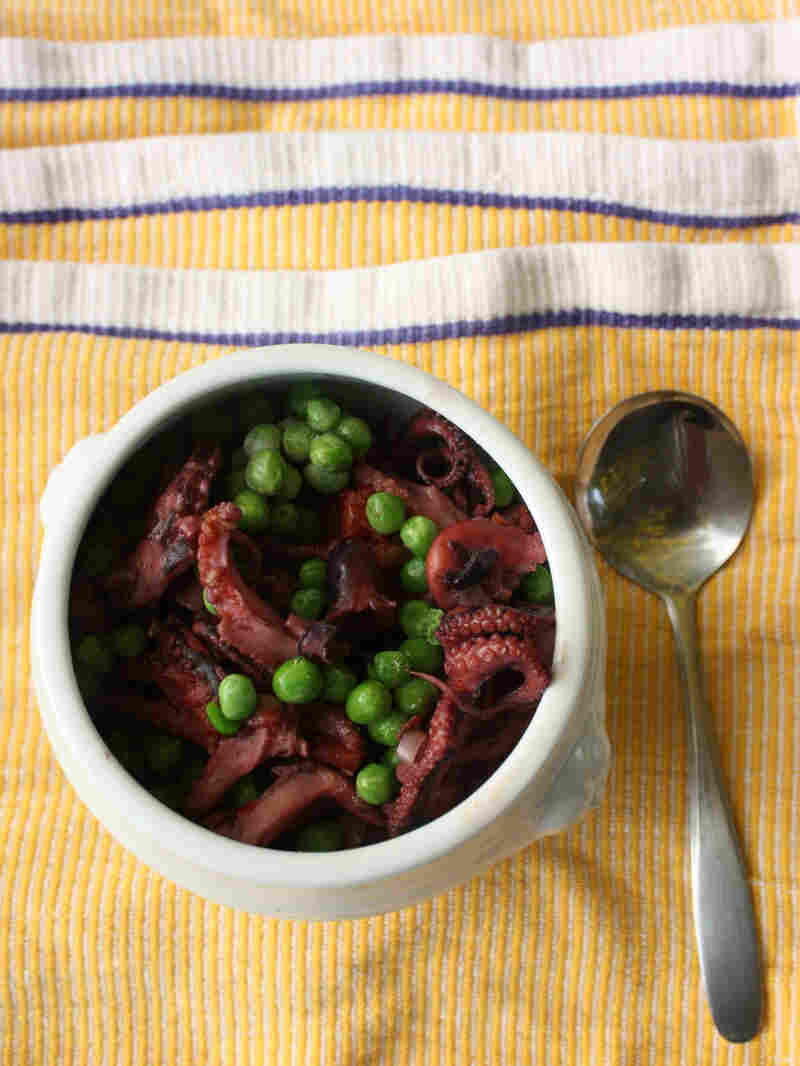 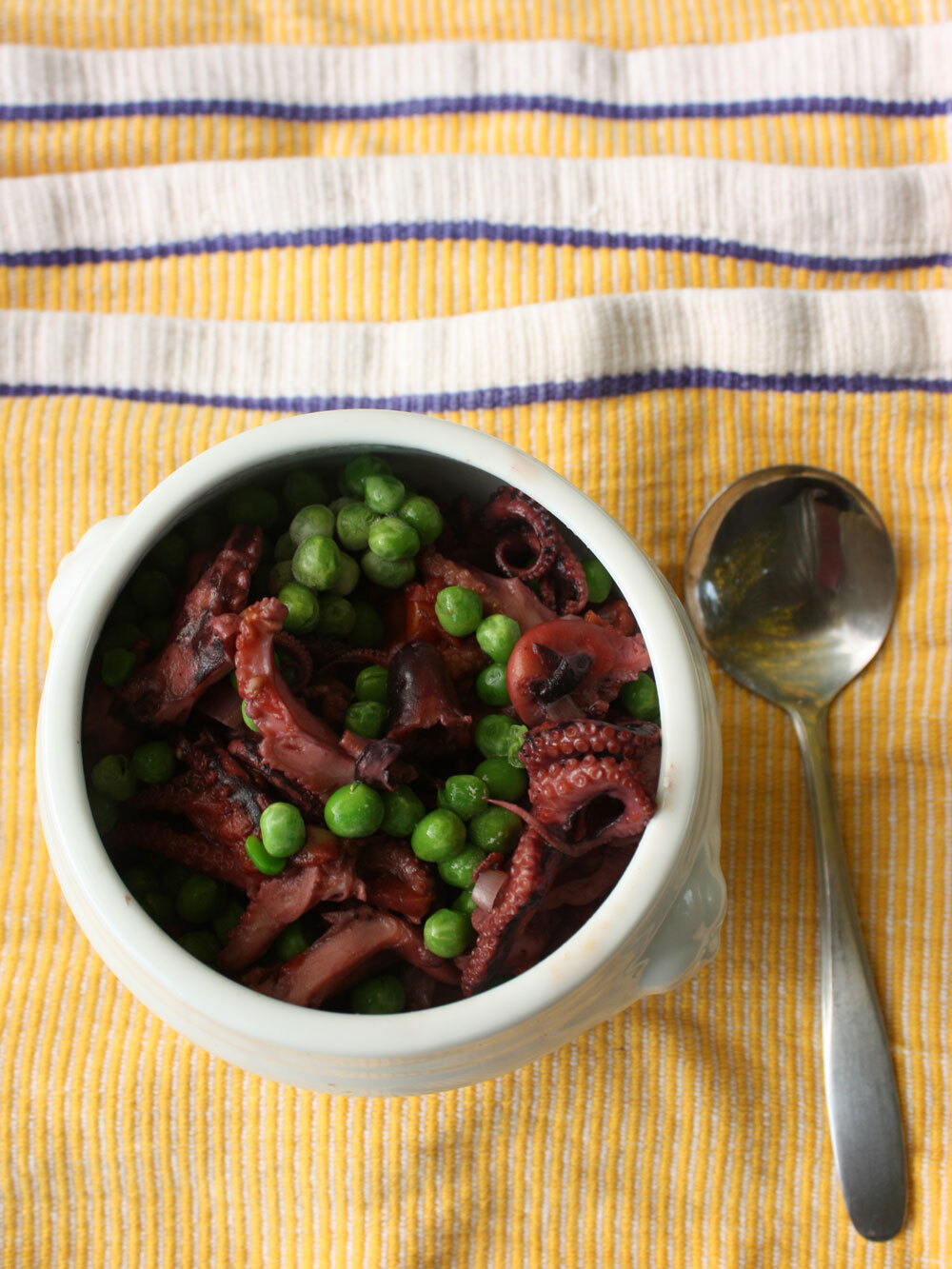 Preheat the oven to 300 degrees.

Place the octopus and 1/3 cup of the oil into an ovenproof casserole with a well-fitting lid. Cover and cook in the oven for 2 hours, until very tender (test with a paring knife; the flesh should part with little resistance).

Heat the rest of the olive oil in a shallow pan with the garlic and shallots, and cook gently until they are soft and lightly colored. Add the red wine, sugar and tomatoes. Simmer until almost all the wine has evaporated.

Lift the baby octopus out of the casserole, reserving the cooking juices, and divide each lengthwise into two halves. Return the octopus to the red wine reduction. Strain the cooking juices into the pan as well and simmer for 15 minutes or so, until the liquid has mostly reduced.

Add the peas and simmer just long enough to thaw them. Season to taste and stir in parsley.

This is the octopus you cook when you're in a hurry and have practically nothing in the house. It's quick, delicious and surprisingly kid-friendly. Grilling the tentacles on skewers makes life a little easier because you can handle several quickly over your hot grill, or a little harder because you have to soak the skewers ahead of time and then thread them. It's up to you. The recipe is adapted from The Gastrokid Cookbook by Hugh Garvey and Matthew Yeomans (Wiley 2009). 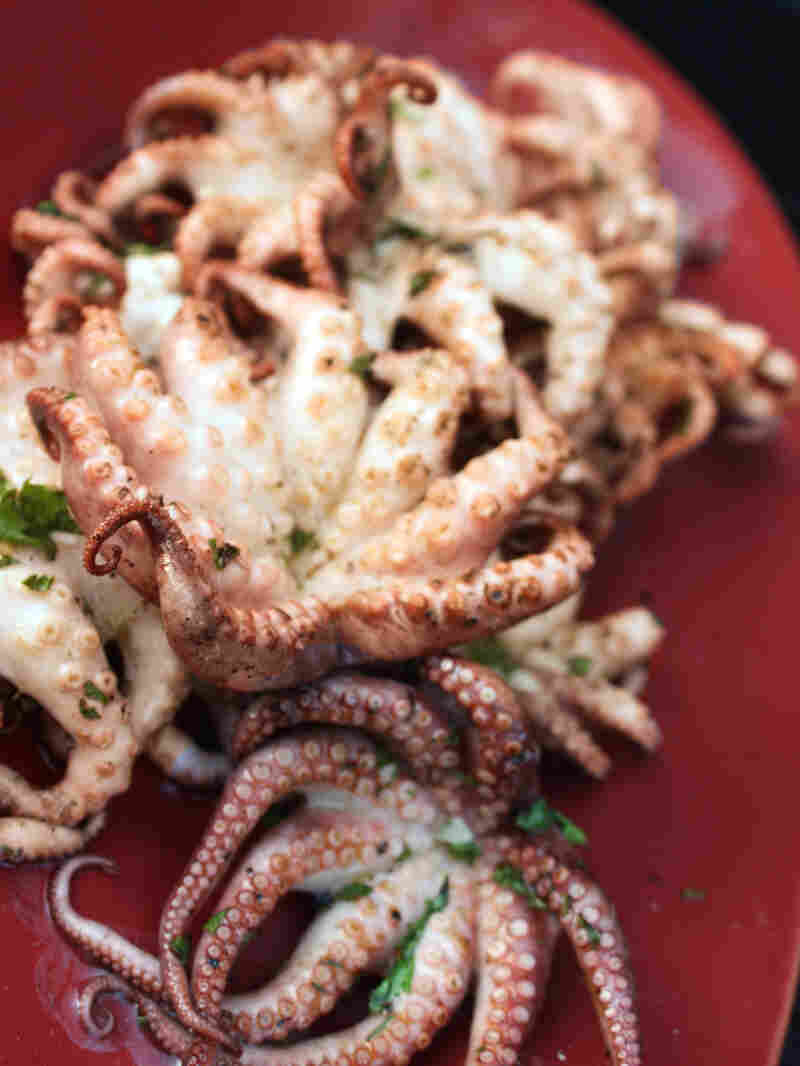 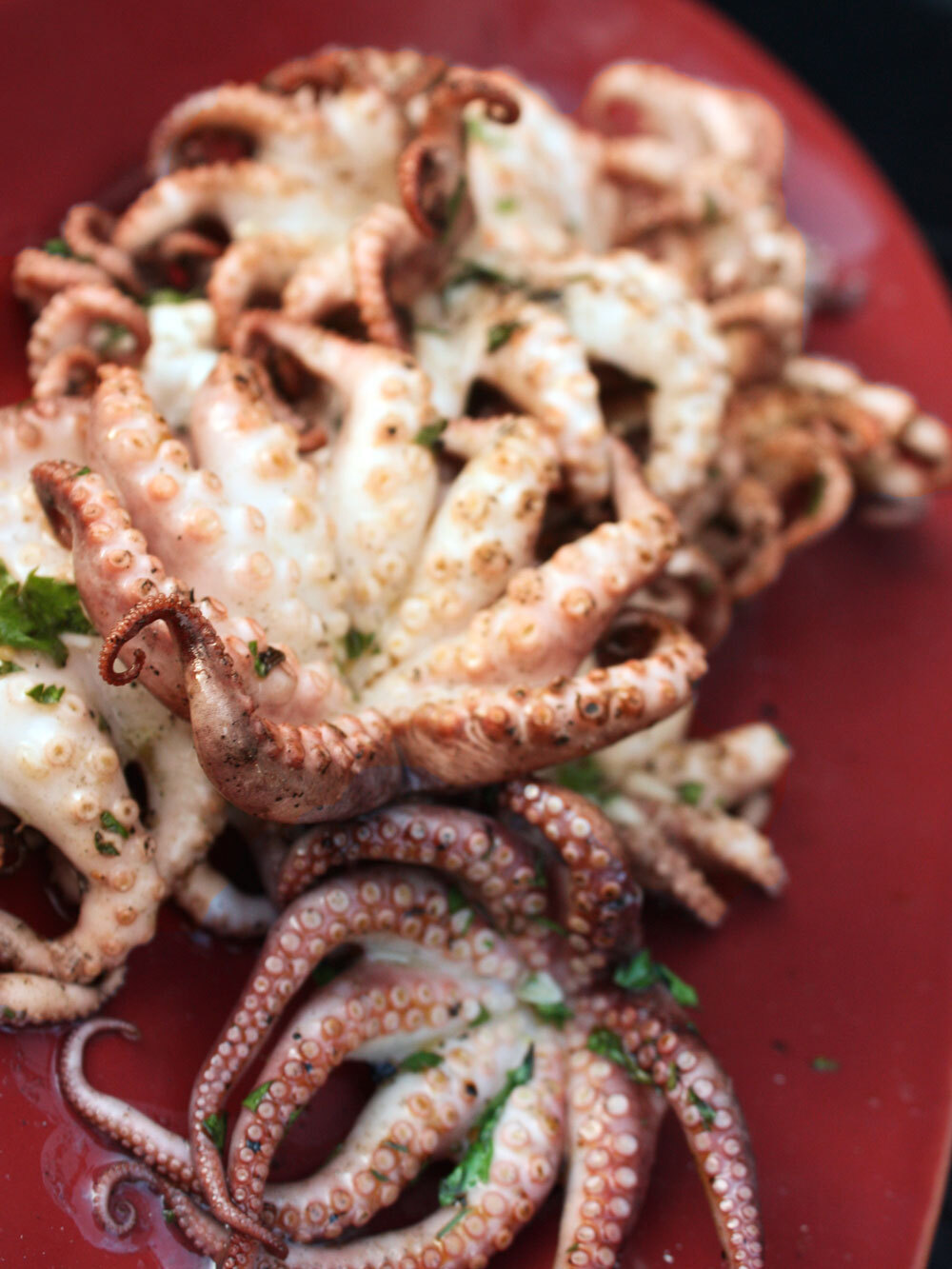 4 cups or so baby octopus (discard the guts-filled heads)

In a large bowl, combine the olive oil, lemon juice, garlic, parsley, salt and pepper. Add the octopus and marinate for 20 minutes or so. Meanwhile, prepare a grill to high heat. Grill the octopus for several minutes, until cooked through.