Accessibility links
Recession Squeezes Mexican Workers In U.S. The vast majority of undocumented Mexican workers in the U.S. are staying put. They are working less and hoping that an economic recovery restores jobs. Besides, they say, the recession back home in Mexico is even worse. Immigrant economic ties are strong between New York City and the Mexican city of Puebla.

There has been a decline in illegal immigration since the financial crisis, but the vast majority of undocumented Mexican workers in the U.S. are staying put, according to new research.

While migrant workers lost jobs faster than Americans, most chose not to go home because the recession in Mexico is even worse. 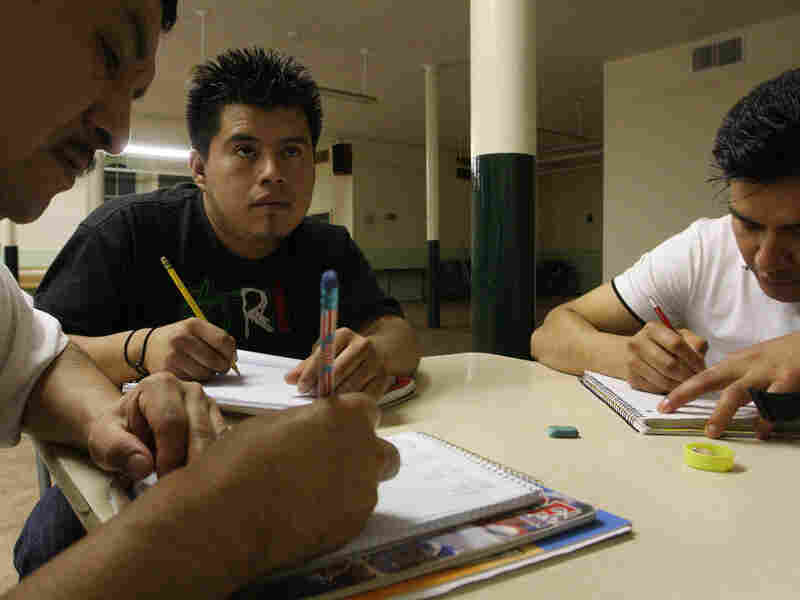 Rosendo Osorio (from left), Santiago Cruz and Lazoro Beltran, all from Mexico and now living in New York, work on their math skills during an adult education session for Hispanics on June 1 in New York. Migrant advocates say many U.S. employers cut the hours of their Mexican workers but encouraged them to stay in the country. Tina Fineberg/AP hide caption 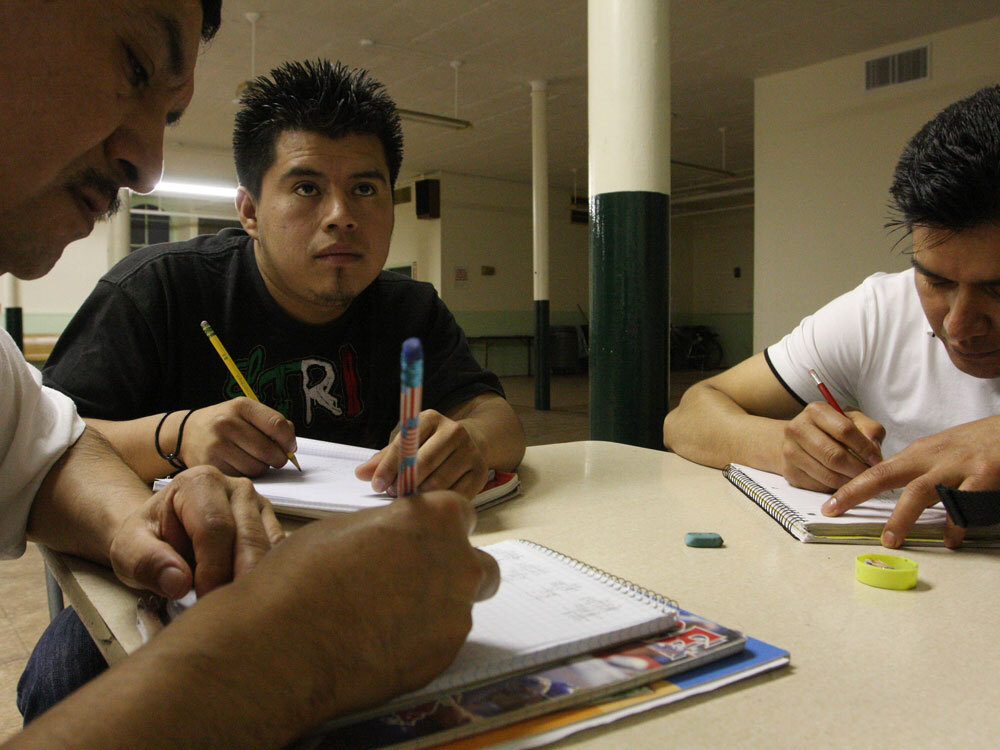 Rosendo Osorio (from left), Santiago Cruz and Lazoro Beltran, all from Mexico and now living in New York, work on their math skills during an adult education session for Hispanics on June 1 in New York. Migrant advocates say many U.S. employers cut the hours of their Mexican workers but encouraged them to stay in the country.

Manuel Castro works in New York for the office of immigrant affairs for the Mexican state of Puebla. From his office in midtown Manhattan, he sees firsthand the effects of the U.S. recession on Mexican workers.

"First, people started to come in and started talking about their employers not being able to pay them," says Castro, who was hired last year, just as the investment house Lehman Brothers crashed and the economy downturn worsened.

As better-paying jobs dried up, Mexican workers in New York looked for any work they could find.

"Now, they are not getting enough hours for their week, they can't meet their expenses, pay rent, sending money back to Mexico. And you know, a lot of them do come and say, 'You know what? I just want to go back home.' But they can't — they are stuck here in New York," Castro says.

A large number of Mexicans from Puebla state came to New York City to find work during the boom years in the 1990s.

Many came illegally from poor rural villages. They have no birth certificates, no school records, nothing that proves they are Mexican citizens — so they can't get a passport.

Cecilia, an out-of-work house cleaner, visits Castro's office to ask for help. She says she has no papers.

Castro says he hears this all the time. "I get a lot of phone calls, people who are like, "Look, how can I get deported?' And I'm like, it doesn't work that way. I just can't call someone to go pick you up," he says.

Cecilia says she would not want to risk deportation as a means of getting back to Mexico. Deportation means being fingerprinted and the risk of jail time, she says in Spanish. "I don't want to go through that."

Most jobs for immigrants were concentrated in construction and the service industries. Demetrios Papademetriou, director of the Washington, D.C.-based Migration Policy Institute, says new research by his organization shows that these are the sectors that got hurt early, were hurt the deepest, and continue to lose jobs.

As a result, unemployment has been disproportionately high for Mexicans in the U.S., regardless of their legal status.

Papademetriou says there has been an unprecedented slowdown in migration from Mexico to the United States. "Net immigration — illegal immigration, in particular from Mexico — has been flat," he says.

Riding Out The Recession In The U.S.

But his research shows that Mexicans already in the U.S. are riding out the crisis.

"So far, they are holding tight, as a rule, and the fact that the circumstances in Mexico are even worse — that makes it even more difficult to even consider going back," he says.

In the 1990s, New York was a destination for so many migrants from Puebla that the local community calls the city "Puebla York."

At annual celebrations in New York's Mexican community marking Mexico's independence day, officials from the state of Puebla last month marched at the head of the parade and met with New York leaders.

"This is the first time they've been here, so this is a very important meeting," Castro says.

Remittances from Mexican workers in the U.S. are a key part of Mexico's economy. They send about $24 billion a year — about the same as Mexico's income from oil production. But remittances are falling for the first time, down 20 percent last year.

In the meeting, leaders of New York's Mexican community renewed their commitment to send money to Mexico. Mexican government officials pledged to match it — three to one — in a program that puts money to work in Mexico's poorest communities.

Less Money To Send Back To Mexico

But remittances from undocumented workers in the U.S. are expected to fall again this year.

Erasmo Ponzi, known as the tortilla king of Brooklyn, knows that many Mexicans living in the U.S. can no longer afford to send money back to relatives in Mexico. He knows because he sells to restaurants and grocery stores in the Northeast that cater to Mexican workers.

"Wow, it's a big change, because before, people would buy five or six packages of corn tortillas. So, now, they buy just two or three. So this is a big difference than before. They don't have jobs. It's bad. The situation is bad," he says.

In a classroom run by Tepeyac, a nonprofit organization in New York City that supports Mexican immigrants, students hunch over thick workbooks and take turns scribbling complex math problems on the board at the front of the room.

Executive Director Joel Magallan teaches the class three days a week. He says many American employers cut the hours of their Mexican workers but encouraged them to stay in the United States.

"What I found from different employers — I was talking to them and they said, 'I don't want to lose my workers. I'm pushing them to stay here and get like 20 hours or 30 hours, as much as I can,' " Magallan says.

New York has depended on Mexican workers for more than a decade. Research from the Pew Hispanic Center shows 95 percent of Mexican men in New York illegally were in the work force.

Papademetriou says U.S. employers will depend on them again.

"The most likely workers to be called back first: Mexicans, those who are here illegally," he says. "And this is going to be very contentious when it happens, very contentious."

When the recession fades, Papademetriou says, employers are likely to bring back those who cost the least. "They are going to try to bring in some more workers who, in their mind, are both hard workers but also contingent workers. In other words, they can let them go if things don't work out just in case a real recovery is a mirage."