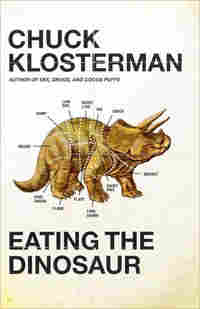 When I was reading Chuck Klosterman IV in the fall of 2007, I was commuting every day on the subway in New York, and I would see it everywhere. I remember once seeing two other people on the same subway car I was on, reading the same book I was. Klosterman's essays on Britney Spears, Val Kilmer, professional basketball, and lots (and lots) more were funny, odd and engaging. This was his second book of that kind, after 2003's Sex, Drugs And Cocoa Puffs, which I also liked a lot, and which I'd enjoyed as an audiobook.

A little more than two years later, he's back with Eating The Dinosaur, a book of essays much less concerned with their ostensible subjects and much more concerned with introspection.

The good news is that if you like his writing (and many people don't), there's lots to enjoy here about Ralph Sampson and Brett Favre, and about Garth Brooks' foray into making music as his alter ego, Chris Gaines. I'm not sure I buy the parallel Klosterman tries to draw between David Koresh and Kurt Cobain, but it's interesting to contemplate.

He still puts together a riff as well as anyone in the business. If you watch football, you've probably done your own impression of the Brett Favre Media Tongue Bath, but here's the way Klosterman depicts it:

The rhetoric never evolved: "He just loves to play the game. He just loves to throw the old pigskin around the old backyard. He just wears Wrangler jeans and forgets to shave. Sure, he throws a few picks now and then, but that's just because he's a gunslinger. That's just Brett being Brett." He was so straightforward and authentic that analysts were unable to discuss Brett Favre without using the word just somewhere in the sentence.

I consider myself a cheerful collector of Brett Favre hit pieces (here's one I also love), and that bit is pretty good. (Though he forgot the part where Brett Favre is like a kid out there.)

The less good news is that, particularly late in the book, Klosterman takes a turn into talking more about himself, and about his preoccupation with a doomed search for perfect authenticity, neither of which are subjects he engages with quite the dead-on accuracy he tends to apply to things like Britney Spears and Brett Favre.

A writer talks about writing and the search for authenticity, after the jump.

Consider this, which comes from his foray into the very hazardous territory in which writers talk about their own process:

There is almost surely a constructed schism between (a) how I feel, and (b) how I think I feel. There's probably a third level too -- how I want to think I feel. Very often, I don't know what I think about something until I start writing about it.

However, I do know this (or at least I think I do): When I am in the actual, physical process of writing, I am writing literally.

It is always a literal, present-tense depiction of what is cognitively happening in my mind. Now, once a given sentence exists, that might change.

It goes on like this for a while. And as much as I admire the effort that's being undertaken here to get his arms around a really big, really complicated idea about the nature of art and communication and truth, I tend to find that your process, as a writer, is never as interesting to other people as it is to you.

The book eventually takes a detour into the kind of "What's it all about?" logic that is almost never as interesting to a reader as it is to a writer. There gets to be a lot of hand-wringing about phonies, and how all romantic relationships are fundamentally "nonliteral" (which seems to be his word for "inauthentic"), and how it's wrong that people love ABBA ironically instead of straightforwardly, and so forth.

I'll put it this way: the chapter on aspiring to be perfectly literal and eschewing irony is focused on praising the authenticity of Weezer, Ralph Nader, and Werner Herzog. If that sounds like a direction you would enjoy, you will enjoy it. If it doesn't, you may find yourself getting a little impatient.

Some of this is fish-in-a-barrel-esque -- I'm not sure I needed another long essay about how laugh tracks are bad, when that's likely an item of received wisdom among anyone who would ever pick up a Chuck Klosterman book. Nor did I get a lot out of the discussion of how advertising is phony. Nevertheless, Klosterman is a writer with an abundance of interesting thoughts in his head, and even finding that I wasn't interested in all of them, there's enough here to recommend. Perhaps not as much as in the earlier books, but enough.