Accessibility links
Pink Martini: A Tale Of Two Songs The songs "And Then You're Gone" and "But Now I'm Back" began as one, with a little help from Franz Schubert. With some ingenious songwriting and a little help from NPR's Ari Shapiro, together the songs tell the tale of a love lost — and perhaps won again.

NPR's Ari Shapiro sings "But Now I'm Back" at the Hollywood Bowl:

And Then You're Gone

But Now I'm Back 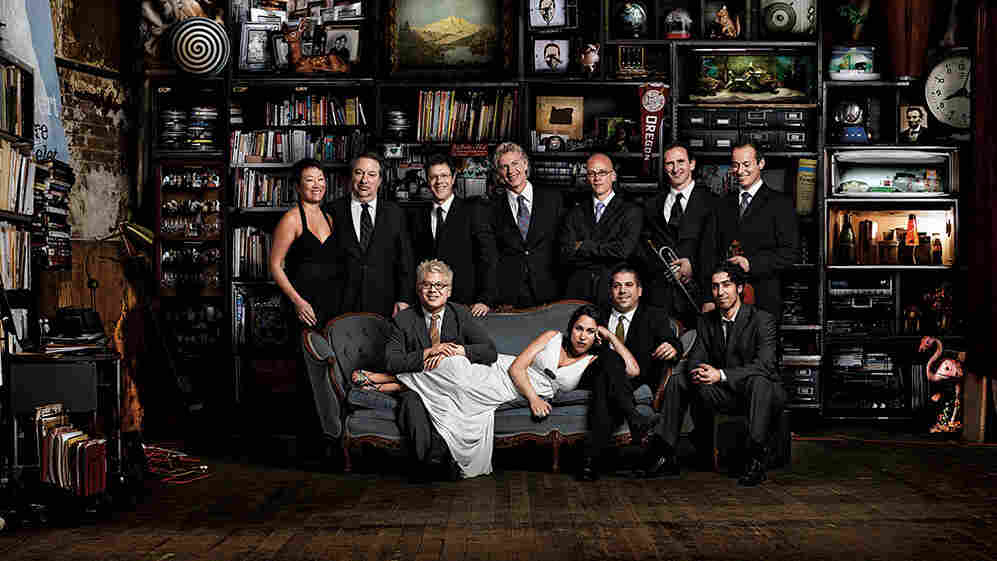 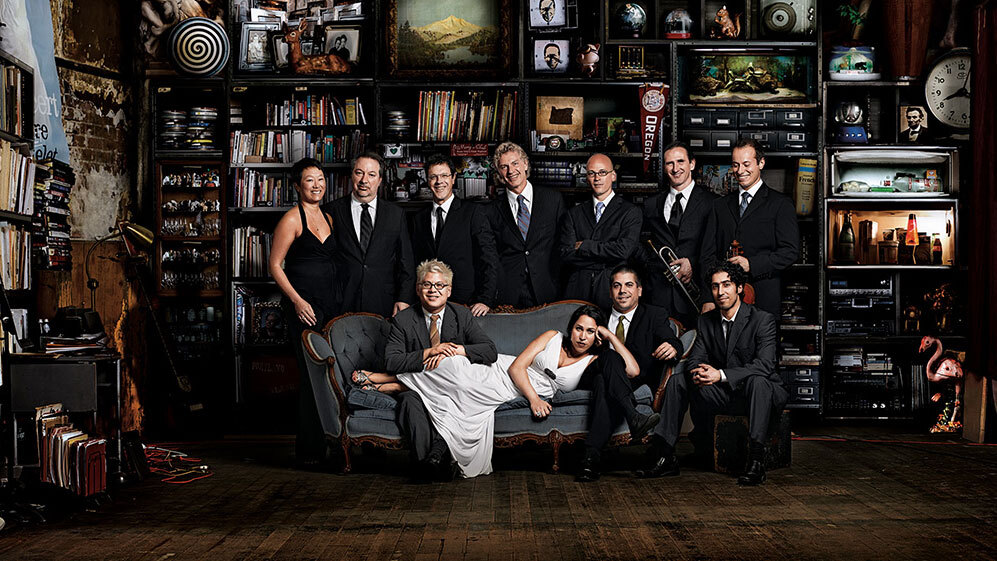 Pink Martini's new album is Splendor in the Grass.

The band Pink Martini draws its influences from a wide variety of places and music genres, which its members credit in part to their international audience.

For its latest record, Splendor in the Grass, the Portland-based band found inspiration for two of its songs from an unlikely place: a sheet of music left on band member Thomas Lauderdale's piano. Lauderdale, the band's pianist, had a copy of Franz Schubert's "Fantasy in F Minor for Piano Four-Hands" out when he was working with one of Pink Martini's producers.

And Then You're Gone

The two started playing with the song, added a Latin beat and incorporated elements that were, according to Lauderdale, "somewhere between 'I Will Survive,' Shirley Bassey and Schubert, and the tango." The track described the plight of a woman who was once head-over-heels for a smooth-talking lover who disappears one day. As the song progressed, Lauderdale and his producer found themselves coming back to a single phrase that would become the song's title: "And Then You're Gone."

After a little tinkering, the song was presented to the band. At a rehearsal, it wasn't received as well as Lauderdale had hoped.

"The day we introduced this song to the band, nobody was happy," he says.

But Now I'm Back

So Lauderdale went back to the drawing board, attempting to salvage the song by trimming it and adding a swing feel.

The second song became a defiant response from the disappearing lover: "But Now I'm Back."

For the part of the lothario, Pink Martini turned to an old friend with a voice familiar to NPR listeners: justice correspondent and frequent Morning Edition guest host Ari Shapiro. Shapiro's inclusion on the album was the result of a fortuitous dinner party he'd held when the band was in Washington, D.C. After dinner, partygoers crowded around the piano to participate in an impromptu singalong. The next day, while sitting at his desk, Shapiro got a call from Lauderdale asking if he'd like to sing on the new album.

Shapiro says he had his doubts.

"I say this with love," Shapiro says, "but Thomas tends to sort of come up with cockamamie, harebrained ideas that could never actually take place, that somehow he manages to make happen."

In this case, Lauderdale's idea did happen: Shapiro makes a guest appearance on Pink Martini's album. Adding to the tale of an NPR correspondent turned singer, Shapiro performed "But Now I'm Back" with the band at the Hollywood Bowl back in September.

The story of these two songs is one of arranging and rearranging, an eclectic mix of musical styles and a chance singalong. It's a story that illustrates well what Pink Martini does as a group, and particularly what Lauderdale does when he convinces a reporter that he ought to sing. Still, Lauderdale says he doesn't consider himself a songwriter.

"China's really more of a songwriter than I am," he says. "My urge is to just practice Schubert and become better."

Forbes says she sees what Lauderdale does as more akin to the work of a composer.

"It's like a tableau," she says, "and Thomas is actually moving the figurines around."

In a fashion that's both playful and typical of Pink Martini, Lauderdale chimes in: "Isn't that just more like set decorator?"