Accessibility links
Fort Hood Suspect Reportedly Upset Over Deployment Thirteen people were killed and 30 were injured in Thursday's shooting at Fort Hood, Texas, and the suspected gunman, an Army psychiatrist, survived despite being shot four times.

An Army psychiatrist blamed for a shooting rampage that killed 13 people and wounded 30 was a devout Muslim who was distraught about an impending deployment to Iraq or Afghanistan, friends and family said Friday.

A former imam who had known Hasan described him as a lifelong Muslim. A family member said he did not want to be deployed to Iraq or Afghanistan, and some former colleagues cited a history of erratic behavior.

The alleged gunman was eventually brought down by four shots from the weapon of civilian police Sgt. Kimberly Munley, who was lauded Friday by post commander Lt. Gen. Robert Cone for her "amazing and aggressive performance" that saved lives.

Hasan was transferred to Brooke Army Medical Center at Fort Sam Houston in San Antonio Friday afternoon, where he was in stable condition in the intensive care unit. Authorities said he was expected to live; in the chaotic hours after the shooting, the military initially said he had been killed.

Military background: Hasan had served in the Army since June 1997. He trained to be a psychiatrist at Walter Reed Army Medical Center in Washington, where he served from June 2003 until last July.

Army Chief of Staff George Casey called the assault, the deadliest such incident ever on a U.S. military post, "a kick in the gut."

Casey, who was accompanied by Secretary of the Army John McHugh, recounted acts of individual heroism at the scene of the bloodshed. "I heard stories about medics running from a graduation ceremony next door when they heard gunshots," Casey said.

The Aftermath Of The Shooting

He also cited a young private who was sitting in his pickup in a parking lot and heard gunfire.

McHugh promised "every possible resource, every possible form of support" for the families and victims. He said the investigation was being handled jointly by the Army's Criminal Investigation Command and the FBI.

Friday evening, several hundred people gathered at a stadium at Fort Hood, where the Army's chief chaplain offered prayers for families and victims of the shootings.

Chaplain Douglas Carver told those at the Friday night vigil — many dressed in fatigues and black berets — to "remember to keep breathing ... keep going."

"God Bless America" and "Amazing Grace" were sung as husbands wrapped their arms around their wives, babies cried and old men in wheelchairs bowed their heads.

It was the first community gathering since the killings.

Army Sgt. Howard Appleby, who helped care for some of the wounded, said what happened on Thursday was even more traumatic than what he had experienced in Iraq.

President Obama on Friday ordered American flags to fly at half-staff until Veterans Day, a gesture he called a "modest tribute to those who lost their lives as they were preparing to risk their lives for their nation."

A moment of silence was held for service members at 1:34 p.m. Central Time on Friday, exactly 24 hours after the shootings began.

Faizul Khan, a former imam, said Hasan was a lifelong Muslim and had at one time regularly attended prayers at a mosque in Silver Spring, Md.

A cousin, Nader Hasan, told The New York Times that after counseling soldiers returning from Iraq and Afghanistan with post-traumatic stress disorder, Hasan knew the scars of war well.

"He was mortified by the idea of having to deploy," Nader Hasan said. "He had people telling him on a daily basis the horrors they saw over there."

Earlier, Nader Hasan had issued a statement on behalf of the family expressing shock and sadness over the incident.

Islamic groups were quick to distance themselves from the attack, and some expressed concern about a possible backlash against Muslims.

"No political or religious ideology could ever justify or excuse [this] wanton or indiscriminate violence," said Nihad Awad, head of the Council on American Islamic Relations.

Hasan was a psychiatrist at Walter Reed Army Medical Center for six years before being sent to Texas in July. He was apparently upset about being scheduled to deploy overseas, according to Sen. Kay Bailey Hutchison of Texas, who told Fox News that she was told Hasan may have been targeting specific individuals. 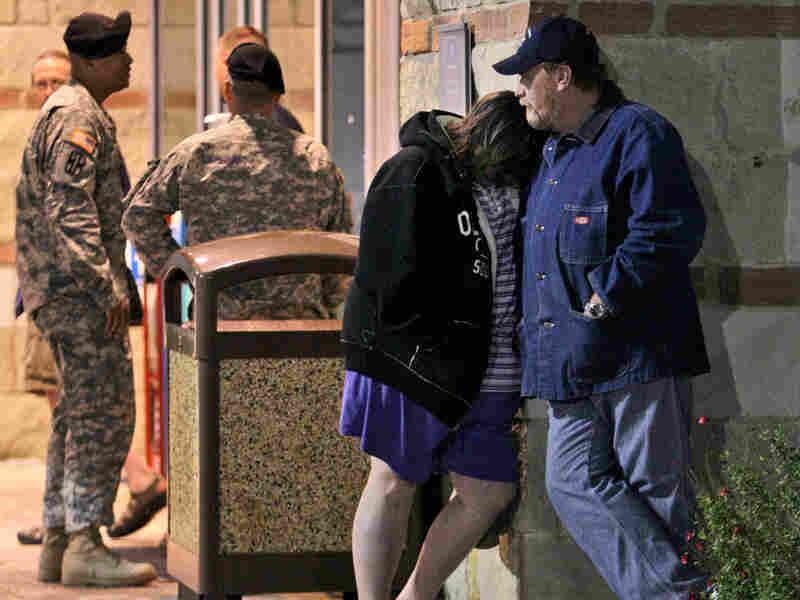 U.S. Army soldiers are seen in the background Thursday as Jamie Casteel and her husband, Scotty, of Duncan, Okla., await news of their son-in-law outside the Scott and White Hospital emergency room in Temple, Texas. Tony Gutierrez/AP hide caption 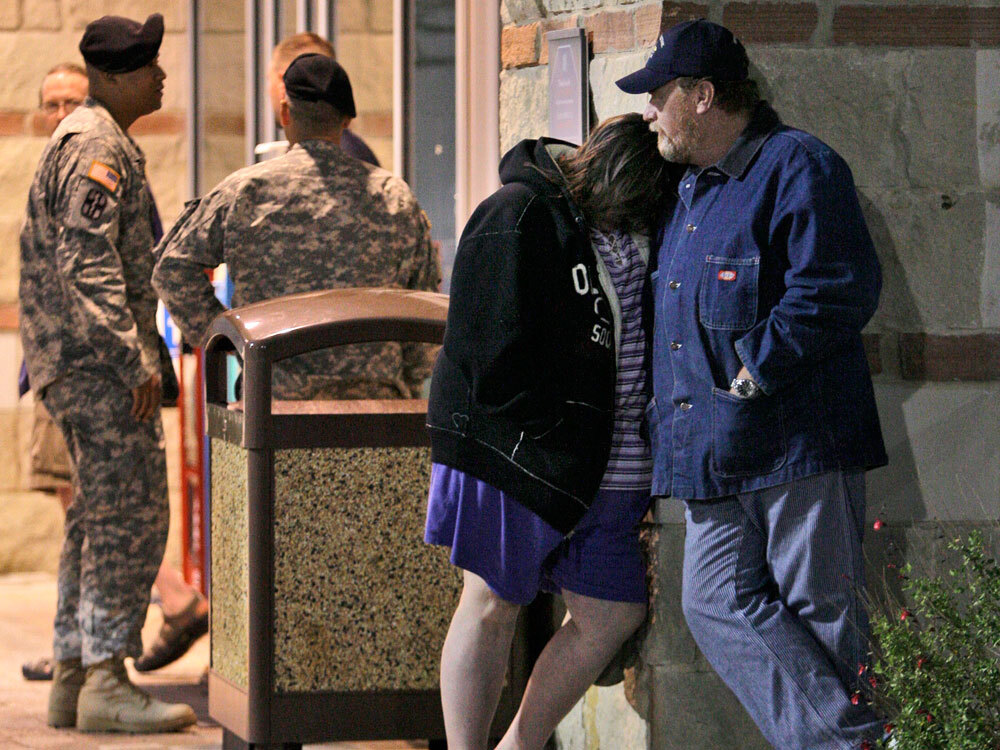 U.S. Army soldiers are seen in the background Thursday as Jamie Casteel and her husband, Scotty, of Duncan, Okla., await news of their son-in-law outside the Scott and White Hospital emergency room in Temple, Texas.

Hasan's supervisor said she was surprised that he had been accused of the shootings.

"In my organization, he was a very dedicated provider," said Col. Kimberly Kesling, deputy commander for clinical services at the post hospital. "He provided good care for his patients. He was a hard worker and we were actually quite pleased to have him as a member of our team."

But two other psychiatrists who had worked closely with Hasan when he was training at Walter Reed told NPR that the suspect could be belligerent. The two asked not to be identified because the military had ordered them not to talk to the media.

They said Hasan would sometimes belittle colleagues without provocation.

The psychiatrists also said Hasan once gave a bizarre lecture to the medical staff in which he said the Quran teaches that infidels should have their heads cut off and set on fire.

"When I heard the news about Hasan, honestly, my first thought was, 'That makes a lot of sense. That completely fits the person I knew,' " one of the psychiatrists told NPR.

Fort Hood, which covers some 335 square miles near Killeen, Texas, is a prime deployment point for the conflicts in Afghanistan and Iraq. Roughly half of Fort Hood's 44,000 soldiers were serving in Iraq or Afghanistan as of August.

More than 520 soldiers from Fort Hood have been killed since the U.S. invasions of Iraq and Afghanistan.

Suspected Shooter Saw Toll Of PTSD Nov. 6, 2009
Muslims Worry About Backlash From Post Shooting Nov. 6, 2009
Tragically: Killeen Has Been Through This Horror Before Nov. 5, 2009