On a humid day this summer, in a parking lot at the long back wall of a gas station, Regina Holliday stood on a scaffold with her palette of red, black and blue and started painting a mural.

At the center, there's a dying man in a hospital. It's Regina Holliday's husband, Fred.

He died on June 17th of kidney cancer. He was 39 years old, with his wife and two young sons.

For official Washington, this has been the season of health care overhaul. Fred and Regina's personal health care struggle overlapped the policy debate going on in another part of the city.

Now she's painted the story of her husband's difficult final days on the gas station wall in a residential neighborhood several miles from the U.S. Capitol and the White House.

Regina thinks if her husband had had better access to his medical records, he would have gotten better care. It's the story she tells in the mural.

"So here he is, his eyes closed," she says, describing the image of her husband, seeming to spill out of his hospital bed. It's a painterly reference to another political work of art, Jacques-Louis David's 1793 painting The Death of Marat.

Like Marat in that famous painting, Regina has painted her husband holding a note. "He's got a paper in his hand. It says: 'Go After Them Regina, Love Fred.' Because that's what he told me to do."

Fred met Regina — she's small with red hair — in art class back in Oklahoma. They'd paint and argue — about art, movies, politics and life. In Washington, Fred taught film classes at a university. 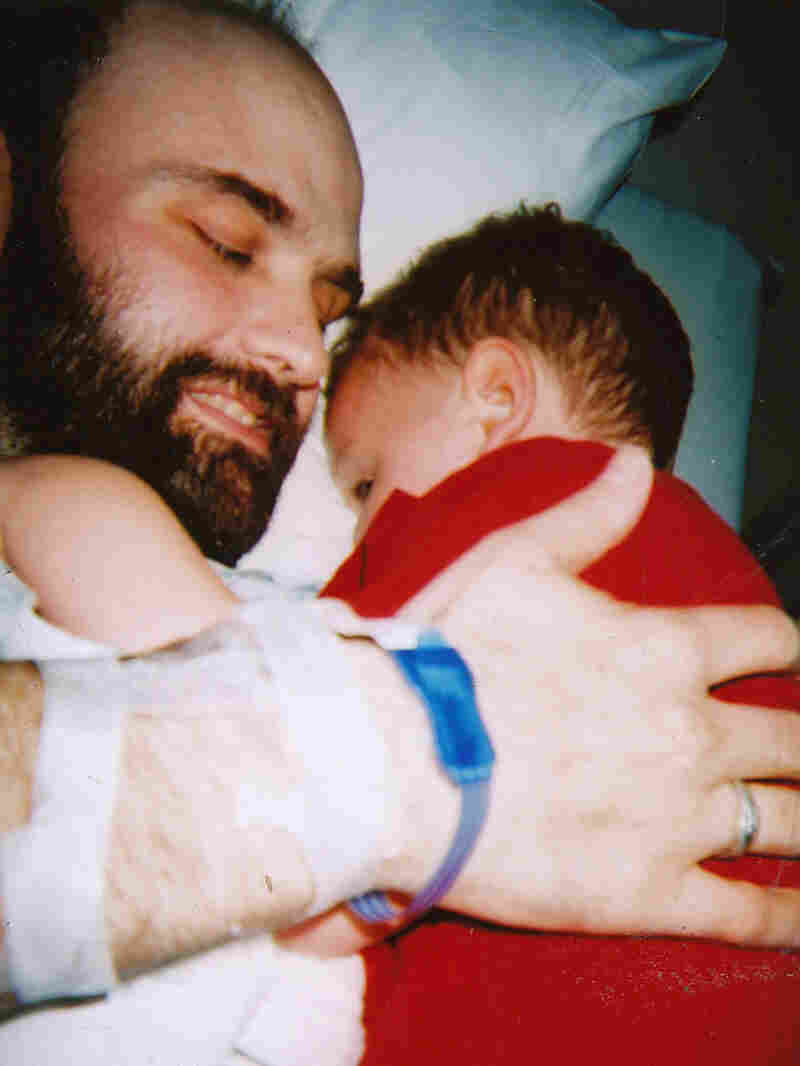 Fred Holliday holds his son Issac as he lies in a hospital bed. Fred was diagnosed with stage IV kidney cancer in March 2009. Image courtesy of Regina Holliday hide caption 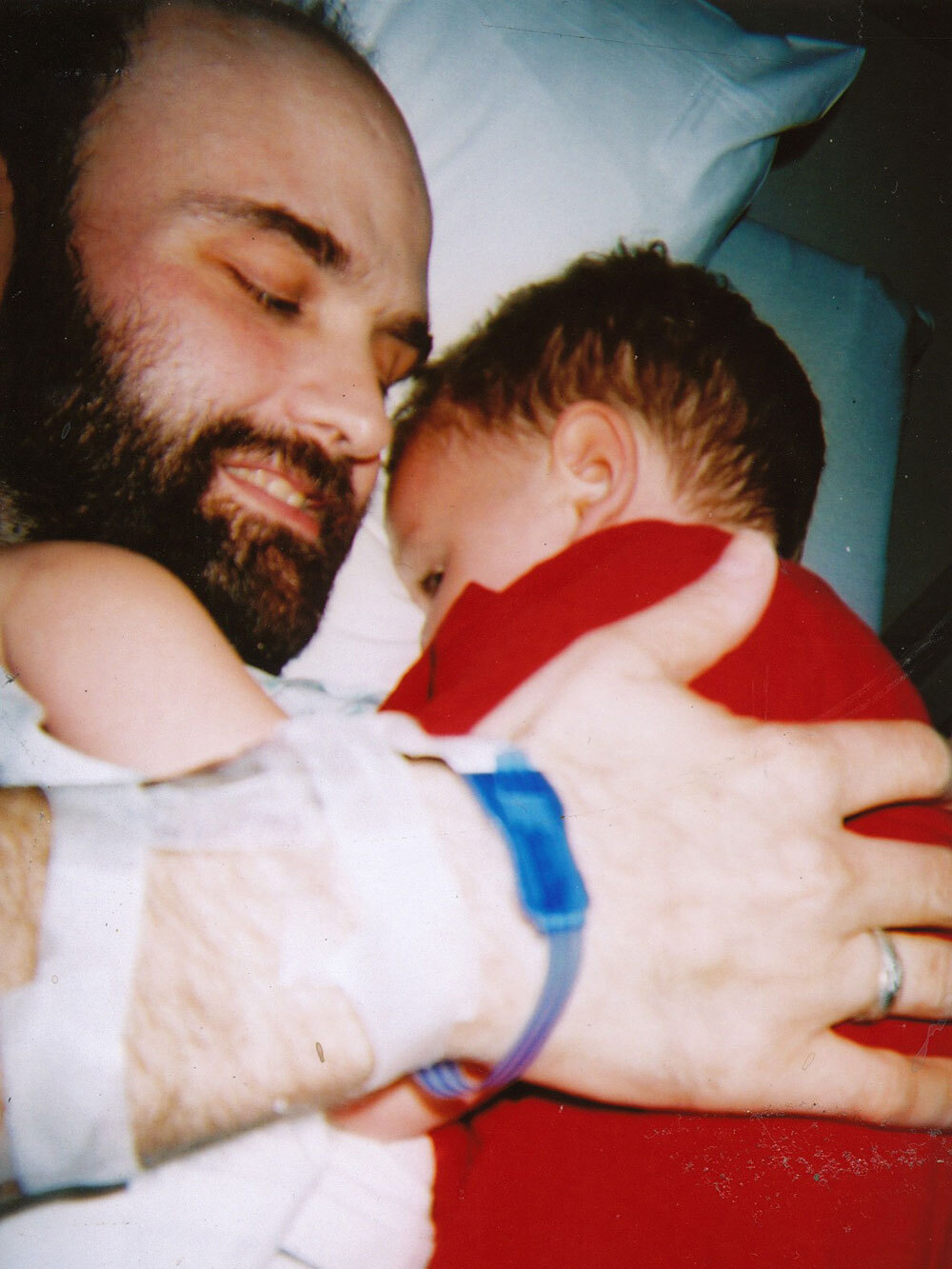 Fred Holliday holds his son Issac as he lies in a hospital bed. Fred was diagnosed with stage IV kidney cancer in March 2009.

Things changed quickly when Fred got sick earlier this year. "So starting in January, like on Inauguration Day, Fred was already in pain," explains Regina. "So we went to the doctor, we went to the ER, because he had massive chest pain. And it turned out he had a broken rib. We don't know why he had a broken rib. Maybe it was from coughing. Everybody was coughing back in January. OK, broken rib from coughing."

Only it wasn't just a broken rib. Fred had kidney cancer. And it had spread to the bones of his rib cage.

The mural tells the story of a horrible day back in the spring. Fred was being transferred to a new hospital and Regina needed records of Fred's many tests and treatments from the old hospital.

"I had gone down to medical records," Holliday says, "and they said, 'That'll be 73 cents a page and a 21-day wait.' I said, 'My husband is upstairs with Stage IV kidney cancer in your hospital and you're telling me I have to wait 21 days? Everything's on the computer. All you got to do is print it out and you're going to make me wait 21 days?' And they're like, 'Yeah, that's just the way it is.' I was floored."

A spokeswoman for that hospital says, for privacy reasons, it can't speak about a specific patient, but that it routinely sends records with a patient who's being transferred to a new hospital.

But Regina Holliday said that didn't happen, and when Fred arrived at the new hospital, nurses there scrambled to find someone at the old hospital who could provide the records. And that as a result, Fred went several hours without treatment or his pain medications. (A spokesperson for the new hospital says it's not unusual for a patient to be transferred without up-to-date records.)

Regina recalls that day, trying to choke back tears, but her voice rising in hurt and anger: "He was in so much pain, he was crying, he was like, 'I hurt so bad.' And they couldn't even feed him. I had to go down to the local pizzeria, and I had to, I had to get him pizza because without the correct transfer information they couldn't feed him."

Over the next two months, Regina would see her husband go in and out of hospitals. But there was nothing doctors could do to save his life. 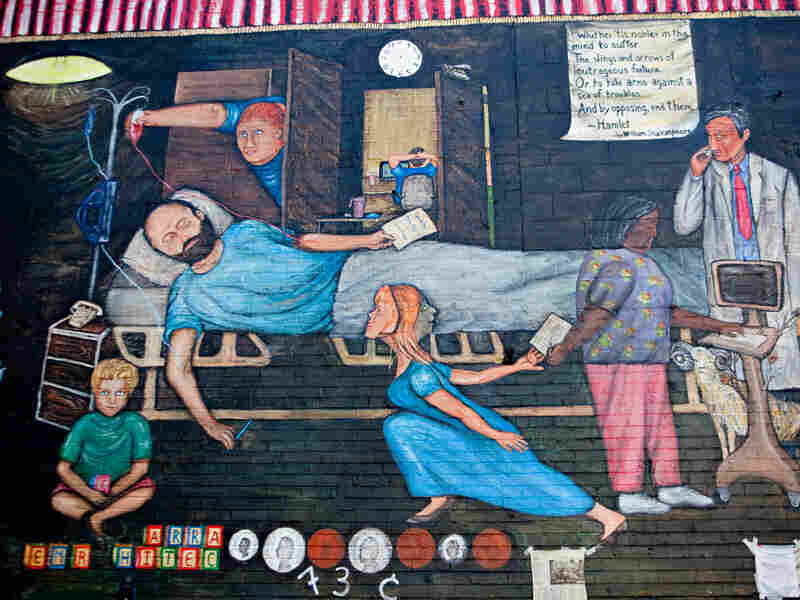 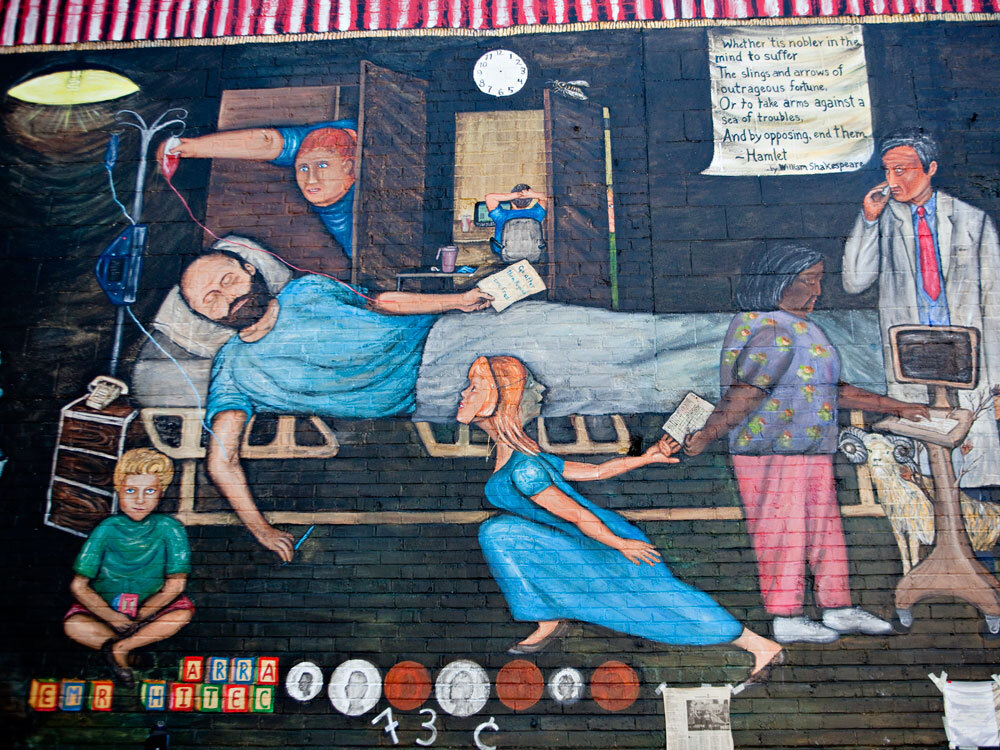 A detail of Regina Holliday's mural showing her husband, Fred, in his hospital bed receiving a blood transfusion.

Six days after Fred died, Regina picked up her paint brushes and started the mural.

The brick wall of the gas station faces a parking lot tucked off of a busy avenue. Important players in the health care debate drive by every day. "It's a wonderful therapy and relief to get to paint," said Holliday. "To get to do this has been a wonderful dialog with the public. I mean, people often come over here. They look at the mural. They want to talk about it and they often share their health stories."

She'd climb down from her scaffold to hear other people speak with anger and sadness about their own run-ins with doctors, hospitals and insurance companies.

As summer turned to fall, and the battle over health care heated up, Regina's mural got more political. She added details, like a doctor, holding a sign that says Health Reform Now. And Regina got invited to a health care event at the White House, hosted by First Lady Michelle Obama

The other day, with the last paint dry, there was a nighttime dedication of the mural. A few dozen friends and lots of kids gathered in the parking lot. They held flashlights to shine on the painting. People sang. And Regina answered questions about all the symbolism in her mural.

The clock with no hands: Because normal time seems suspended in a health emergency.

The nurse at a computer with the dark screen: Because records aren't shared with patients.

The doctor with her hands tied: Because one part of the health care system doesn't communicate with others.

Regina Holliday is looking for new walls to paint, but not now. The cold makes the paint too brittle. In the springtime, she'll take out her colors again.

Maybe by then, there will be health care change signed into law. But there will still be stories to tell. This time she will paint the stories of others — of the people who've watched her work and told her about their own struggles as caregivers and patients.