Accessibility links
The Decade In Music: OutKast's 'So Fresh, So Clean' (2001) As the music industry began to break apart and go niche, it's remarkable that a group as artistically ambitious as OutKast could break through the way it did.

Listen: 'So Fresh, So Clean' by OutKast 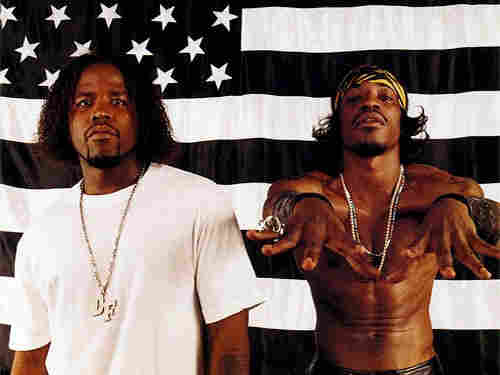 OutKast's Stankonia was one of those game-changing records that made everyone perk up and pay attention. courtesy of the artist hide caption

As the music industry began to break into niches in the early '00s, it's remarkable that a group as artistically ambitious as OutKast could blow up the way it did. But Stankonia was one of those game-changing records that made everyone perk up and pay attention.

Released in October 2000, Stankonia peaked in 2001, thanks to huge singles — "Ms. Jackson," "B.O.B. (Bombs Over Baghdad)" — that bridged the gap between art and commerce. Sure, OutKast was on MTV, on the radio and at dorm-room parties, but Stankonia was also voted the year's best album in the Village Voice's Pazz & Jop critics' poll.

It helps that the record — and especially tracks like "So Fresh, So Clean," with its inspired collages of rap, electronica, psychedelic rock and funked-up soul — sounded like nothing else at the time. Stankonia is full of contradictory elements: Its appeal is immediate, but it's constantly revealing new layers of instrumental depth. The music fuses programmed beats and synthesizers with organic live instruments, making it feel both alien and familiar. The songs can be serious, but they're just as often whimsical and funny.

Even the duo's well-honed personae showcase OutKast's duality: The quick-tongued Big Boi is more aggressive, navigating speedily through complicated rhymes about women, parties and street cred, while Andre 3000, his falsetto-singing counterpart, is more likely to focus on bigger issues such as materialism and gun violence. Dre is the idealist, the lover; Big Boi the individualist with swagger.

What makes Stankonia stand out — even when compared to OutKast's fantastic 2003 follow-up, Speakerboxxx/The Love Below, which plays more like a pair of solo records — is the way the two sides get tangled. In "So Fresh, So Clean," Dre and Big Boi intermingle not only their points of view in each verse, but also attempt to unpack the differences between commercial gangsta rap and more socially conscious hip-hop.

Revisiting the record now, it's easy to understand why OutKast was embraced by so many at a time when people were increasingly going their own way. It fuses a world of differences into a united sound that appeals to everyone, yet still feels ahead of its time.